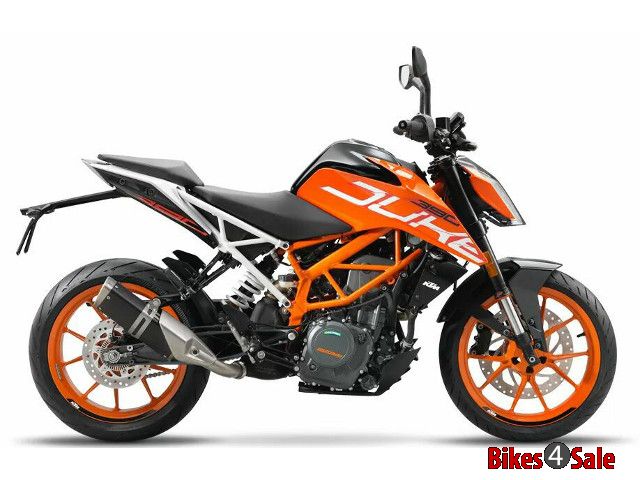 Launched in India in November 2012.

The second big launch of the Austrian naked bike manufacturer. Massive is the machine. A step ahead in the entry level naked motorcyclism. Packed with a powerful engine, which is a mixture of stunning 44 Hp, the bike gifts what a rider needed form it. Coupled with a 373.2cc, Single-cylinder, 4-stroke, spark-ignition engine, liquid-cooled engine, the bike itself become more than enough for any naked bi-wheeler lovers.

The new upgraded KTM Duke 390 for the year 2017 is flooded with many features. This new Duke is based on the flagship model Duke 1290.

It has the same 373.2 cc engine that used in the earlier version, which delivers a maximum power of 43 bhp @ 9000 rpm and a peak torque of 35 Nm @ 7000 rpm. A 6-speed manual gearbox uses a chain drive to deliver the power o rear wheels. It has a Bosch Engine Management System to control the entire working of powertrain. Powder coated steel Trellis frame surrounds the engine.

The suspension system consists of high-quality WP upside fork with 142 mm travel at the front and WP monoshock with 150 mm travel at the rear. A 320 mm front disc and a single piston floating caliper disc at the rear deals with the braking department of this bike. Bosch 9MB two-channel ABS system is also used in this Duke.

Some of the visual changes are new extended fuel tank, high mounted LED blinkers and new halogen lit headlamp. It also features a TFT digital instrument cluster screen. From the 2012 Duke 390, this one features a new paint scheme.

The bike weighs around 149 kg and fuel tank capacity is 13.4 litre.

Book a Test Drive through Bikes4Sale and we will try to get you the best offer for KTM Duke 390. 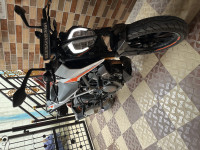 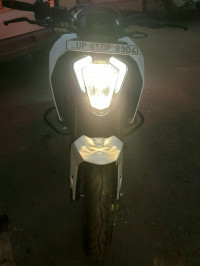 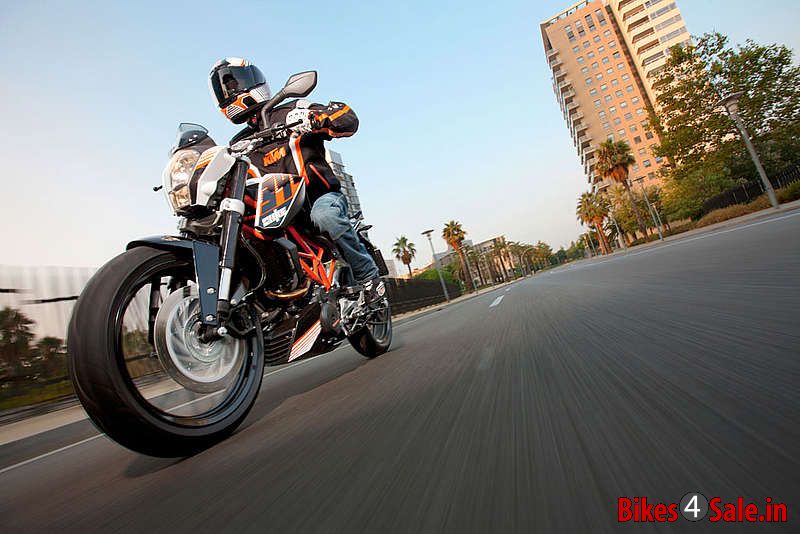 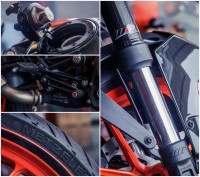 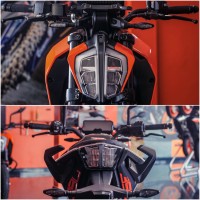 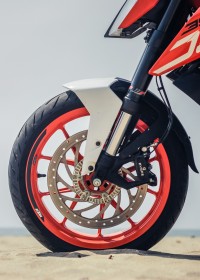 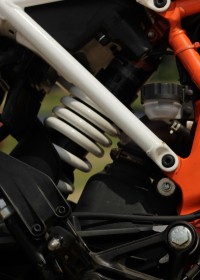 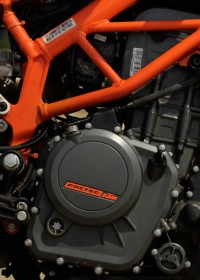 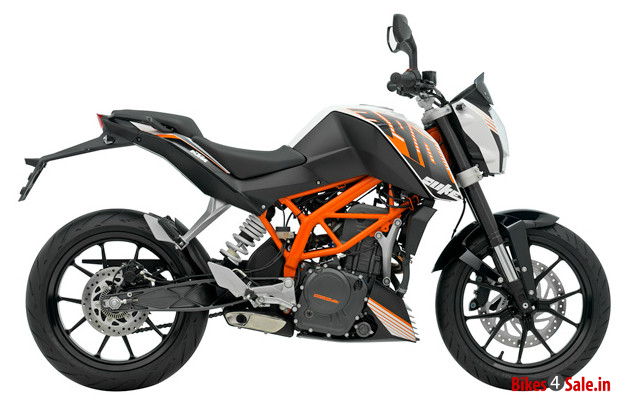 The Duke 390 is a powerful and mean naked sports bike offering from the Australian maker KTM, the 390 is the predecessor of the successful Duke 200. KTM has given a similar styling to the two sports bikes and this can be seen in the whole design package. 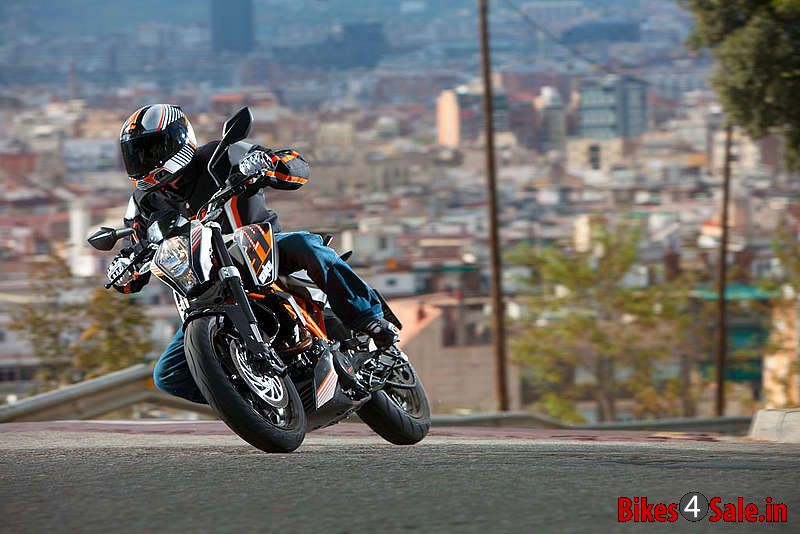 Much of the front design styling of the 390 is taken from the 1290 SUPER DUKE R, this can be clearly spotted from the aggressive LED headlight, that combines optimal illumination of the near field with maximum light output and the same can be seen in the Super Duker. The parking light of the 390 consists of 20 LEDs, which makes sure that the motorcycle is identified better in all riding environments and light conditions making it safer while riding at all times. 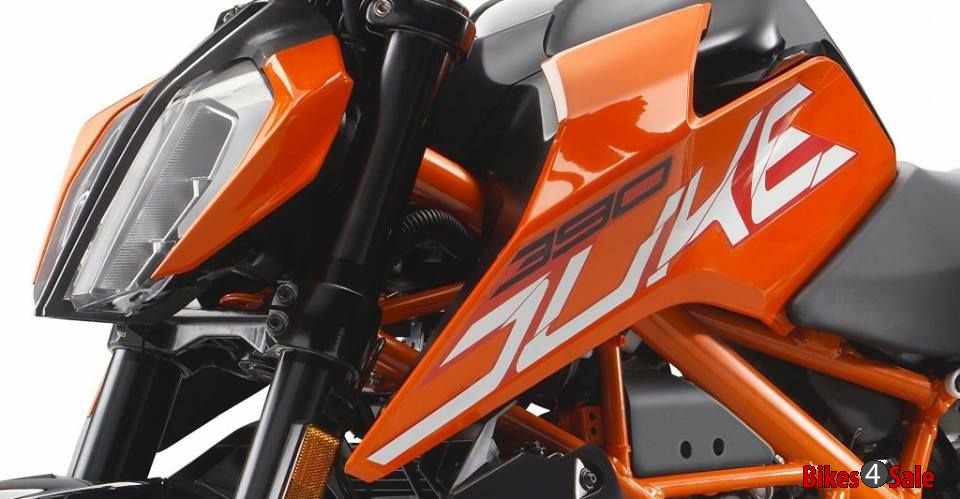 The new Duke 390 comes with an all-new TFT display. This TFT display has a multicolour combination of relevant information, that will be essential for the rider, and the TFT display presents all relevant data in a clear-cut, uncluttered way. The display bars change colour, and it automatically adapts its illumination to the ambient light. A smartphone can be tethered to the bike via the TFT display using Bluetooth connectivity. This gives the rider full control over incoming calls and an audio player. All the information pops up on the bike´s display as you manage this optional extra with the menu switch while keeping the hands on the handlebar.

The raw power of the Duke 390 is unleashed by the powerful and monstrous 373cc Single-cylinder, 4-stroke, spark-ignition engine, liquid-cooled engine. This middleweight sports bike produces a maximum power of 43.5 Ps @ 9000 rpm and a 35 Nm @ 7000 rpm. The engine of this naked monster is mated to a 6-speed, claw shifted transmission system. 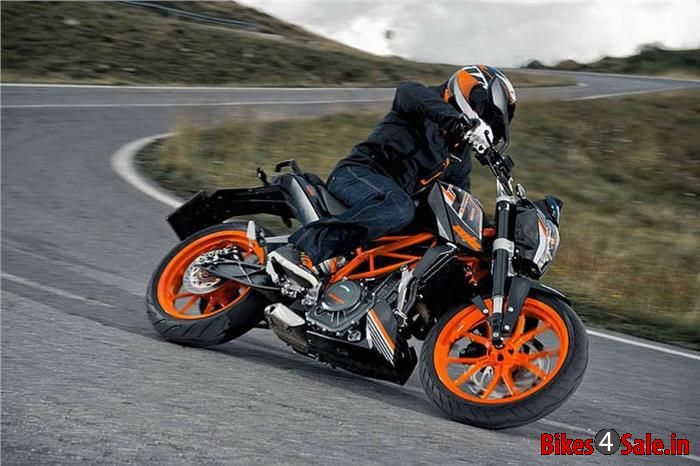 The engine pulls out its power and torque at all speeds and provides good initial response and throttle control. The Duke 390 manages to get a top speed of 160 kmph and KTM has locked the top speed of this monster to its safe limits for the good of the engine and the rider as well.

The 390 use a very high-quality upside-down fork from WP Suspension that comes with open-cartridge technology, which offers impressive advantages mainly due to its easy maintenance, simplicity and also because of the making with very fewer components. The Duke 390 comes with the racing-inspired DNA of its elder sibling 690, as we can spot a very hard and rigid die-cast swingarm which comes designed and produced according to the same standards and principles of the elder sibling. The Duke 390 uses a Tubular space frame made from chrome molybdenum steel and comes powder-coated for its look and feel. The chassis has a very lightweight characteristic, the trellis frame makes this sportbike rule street and corner with maximum agility and the centre of gravity achieved by the bike maximize the manoeuvrability and precision of the bike while riding at higher speeds. 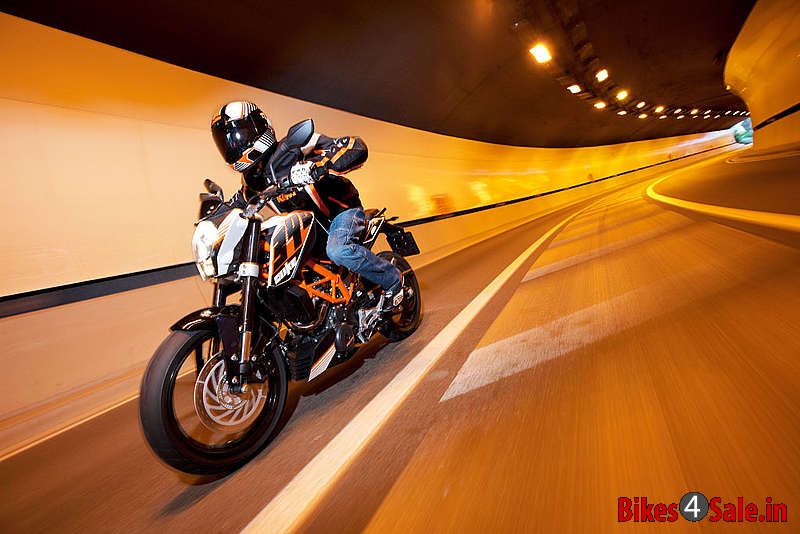 The Braking system of the Duke 390 consists of 2-channel Bosch ABS that keeps up with the power dynamics and rage showcased by the Duke. The ABS system of the 390 is safeguarded with radially-bolted, 4-piston calliper and 320 mm disc diameter at the front, while at the rear, the Disc brake with one-pot brake calliper, floating brake discs are provided.

With a very powerful engine, mean and beautiful design and modern equipment and ABS as standard, the Duke 390 is a peace of marvellous machinery one can buy in India. What makes this lightweight naked sports bike more attractive is its low pricing, which cannot be matched by any in this segment. The Duke 390 is very aggressive and powerful, its lightweight design with high torque characteristics might make it hard to tame around congested roads and busy traffic, but when tamed this monstrous beast will be high on the rev range. The Duke 390 is all game for serious highspeed riding and this will be choice hard to miss for a serious biking enthusiast and serious riders alike.
Test drive reports, reviews and news
User Reviews of Duke 390. Write Your Review
Guys I love it becoz of some rare look of duke
By Suresh Joseph on 12-12-2019
well, duke 200 is a killer machine, but kids these days take these bikes for granted and end up there lives in the rash roads of our country. I personally think these bikes should comes with a tag like a statutory warning that reads " high end torque and Bhp could cost life" or something like that by the govt who robs away 30% of the overall cost every individual bike sold in the country. Safety first. Kudoos to all riders.
By Sudheep Mehta on 20-07-2017
Not always ktm Duke 390 I am eagerly waiting for ktm super Duke 1290.
By Rajive on 19-05-2015
I love Duke390 in life and i sweet duke 390. its beautiful the duke 390 a good
By Javeed Pasha on 10-04-2015
The bestest bike for riding in midrange.
Price,performance,style is another name of duke.
By Sanmay on 17-12-2014
ktm machines have good inticial power but poor topping. if 390 duke hits 160 top speed then I am much satisfied with my 220 pulsar which hits 151 quite comfortably. ktm maker should think about this issue.
By Sadiq on 20-10-2014
If it gives out 44bhp with 30kmpl,then why should anyone buy another bike?
By Proyash on 02-09-2014
Ktm engines are far more better than pulsar engines. I own a pulsar 220 which vibrates like he'll. Now iam ktm duke 390. No bike can beat it. Simple as details say
By Shreyas on 13-08-2014
Its my dream and loving bike but i cant afford this anyone can give me this bike and i will do anywork for this bike may contact 08538904100.
By Prince Kashyap on 25-06-2014
here comes the pulsar cs400. bye bye duke 390. pulsar aalways rockkk
By Jai Pee on 08-02-2014
Compared to other bikes in this category,its got everything, power,looks and excellent pricing with host of other features.
By Amar Singh Deori on 19-09-2013
The More i read Road Reviews, the more eager i have become to possess it. The waiting for this bike is making me restless. I just want to ride my bike. Hope i get as early as possible as i have been told a waiting period of 45 days.
By S Ramesh on 28-08-2013
i booked duke 390 few days ago. Awesome looks,performance amd being sold thru Bajaj in India and assembled in Chakan Plant Near Pune. This is a Everyday Bike - Rough and Tough. Eageraly awaiting to ride it.
By S Ramesh on 24-08-2013
A bike wiid 373cc and can rch only 160kmph my pulsar 220 rchs 135kmph.
Kya srf 25kmph ka difference hota hai 220cc or 375cc me pulsar rockss.
By Anant on 23-08-2013
The best motorcycle in its class. naked but looks cool and sporty. It comes with ABS at a surprising price tag. Sure, it will be a massive hit in the India market
By Tilak on 05-08-2013
It has got a great pricing. It will kill everything. Though it is naked, it is packed with almost all stuffs to chop off Kawasaki Ninja's, Honda CBR 250R's, and Hyosung GT250R's market share. Just Rs. 2.05 lakh with ABS as standard. Would you believe it? Greeeeeeaaaaat work by KTM India and Bajaj Auto.
By Oram on 30-07-2013
KTM Duke 390 will launch in India today. Eagerly waiting for its price.
By Varun on 25-06-2013
Waiting for the machine. I will buy it as soon as it reaches here in India. Really nice.
By Daniel on 21-06-2013
Much anticipated to see the machine in Indian roads. This will certainly rock India. meanwhile a new enemy for Ninja 300, Honda CBR 250R,a nd Hyosung to GT250R. Sometimes even to the upcoming Pulsar 375
By Luke on 20-06-2013
I like duke because it is the most stylish naked bike that i had seen. The colour combination and the power that provides was really perfect. Its comfortable to drive the duke which provides this much of torque.
By Ananduanil on 29-03-2013
Duke is a bike , one can badly aspire of. Its quality parts, reasonable performance and value for money. It offers a lot of power compared to its price.
By Mahadev Kasta on 25-03-2013