KTM Duke 390. The most wanted and popular machine in the country. Have you ever wondered why these petrol heads are going mad about the 390s? Because of DNA of the this machine itself is worthy of every penny. It is a must-have motorcycle for every bike lunatics dream garage. The weight to power ratio of this machine can be compared to some of the exotic sports cars of the modern day. And I think this could be enough though, to buy this motorcycle. 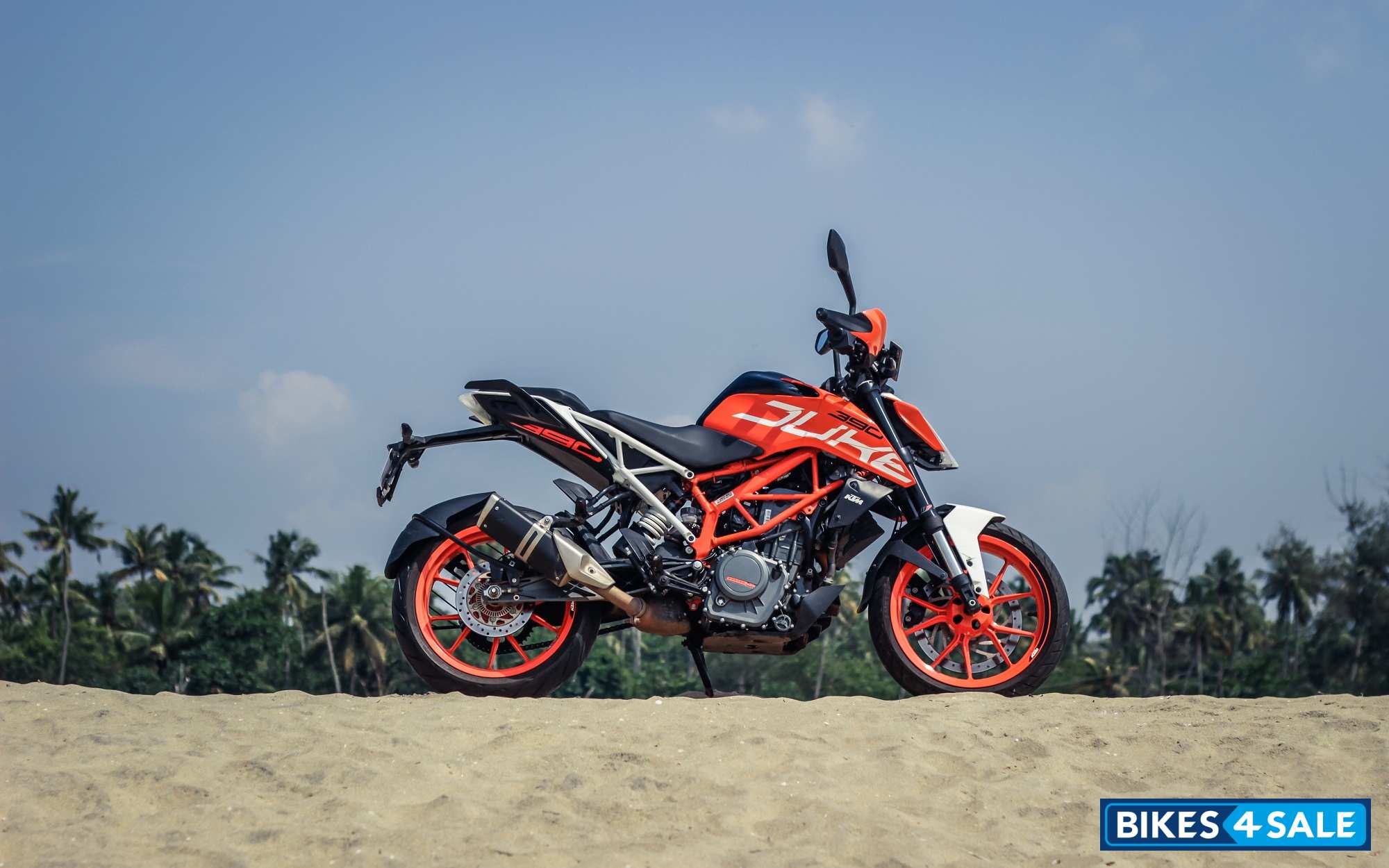 This entry-level single-cylinder sports bike was debuted in 2012 EICMA festival held at Milan. From the year 2013, it went on for sale in India and few South East Asian countries from the Indian assembly house, courtesy of Bajaj Auto Ltd.

When it was launched in India, it revived the entire motorcycling culture that we have been known for ages. Looks pretty close to Duke 200, the 390 was a different animal which requires an extra nerve to sit and ride on. One of the fascinating elements of Duke 390 was its pricing. There is no other sports bike in the country which offers performance figures close to the Duke 390 under 2 lakhs of ex-showroom pricing. 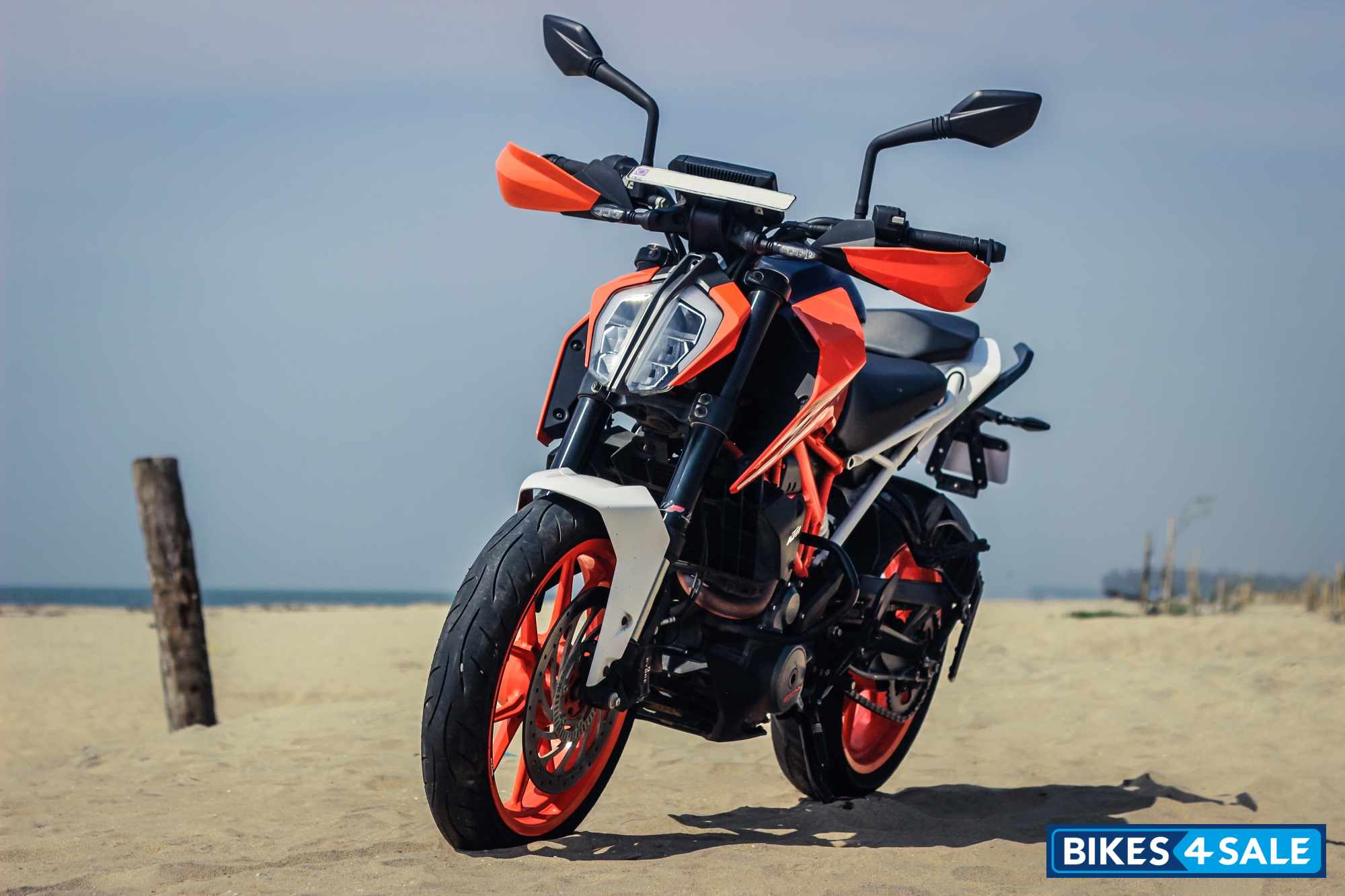 The Engine and Performance of new Duke 390

It is true that the new gen Duke 390 gets a 373.4cc, liquid-cooled BS4 engine. Therefore, it is expected to deliver lesser power figures when compared to the old Duke 390 due to strict emission norms. It only delivers a maximum power of 43 Bhp @ 9000 rpm which is one horse lesser than the old model. However, on the other hand, it generates 37 Nm of peak torque @ 7000 rpm which is 2 Nm more and kicks early in the rev range, which is benefited in setting the initials even better than the previous 390. 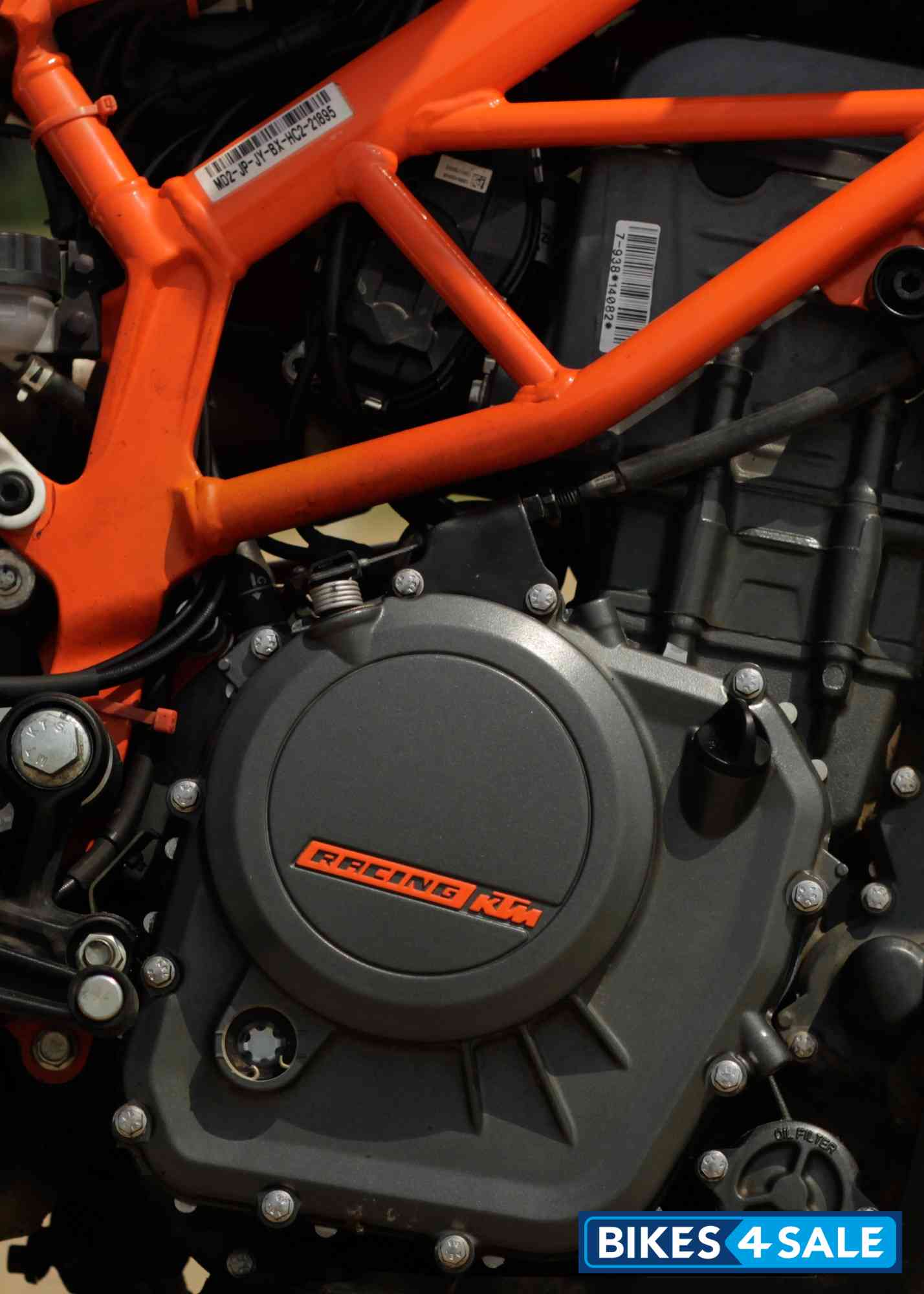 The duke 390s are defined by the raw power and largely, nothing has been changed in this new 390 as well. Meanwhile, the Euro IV emission did lock those overload power to a bay with the help of a ride-by-wire system. Still, it entertains the rider with an explosion of power when we open the throttle. This time, we didn't get an opportunity to test the 0 to 100 kmph mark and the top speed of this machine due to some technical issues, but we will definitely do that in near future and get you our results. However, the vehicle is expected to reach from 0 to 100 kmph under 6 seconds with a top speed over 160 kmph.

With the slightest twist of throttle in the second gear will get you over 80 kmph in no time. Moreover, the machine itself is happy to cruise around 100 to 125 kmph with maximum easiness and comfort. Also, this bike is expected to have a fuel efficiency range of 25 to 35 kmpl depends on the terrain and how good you ride this beast. It is agile, nimble and crisp in every aspect. 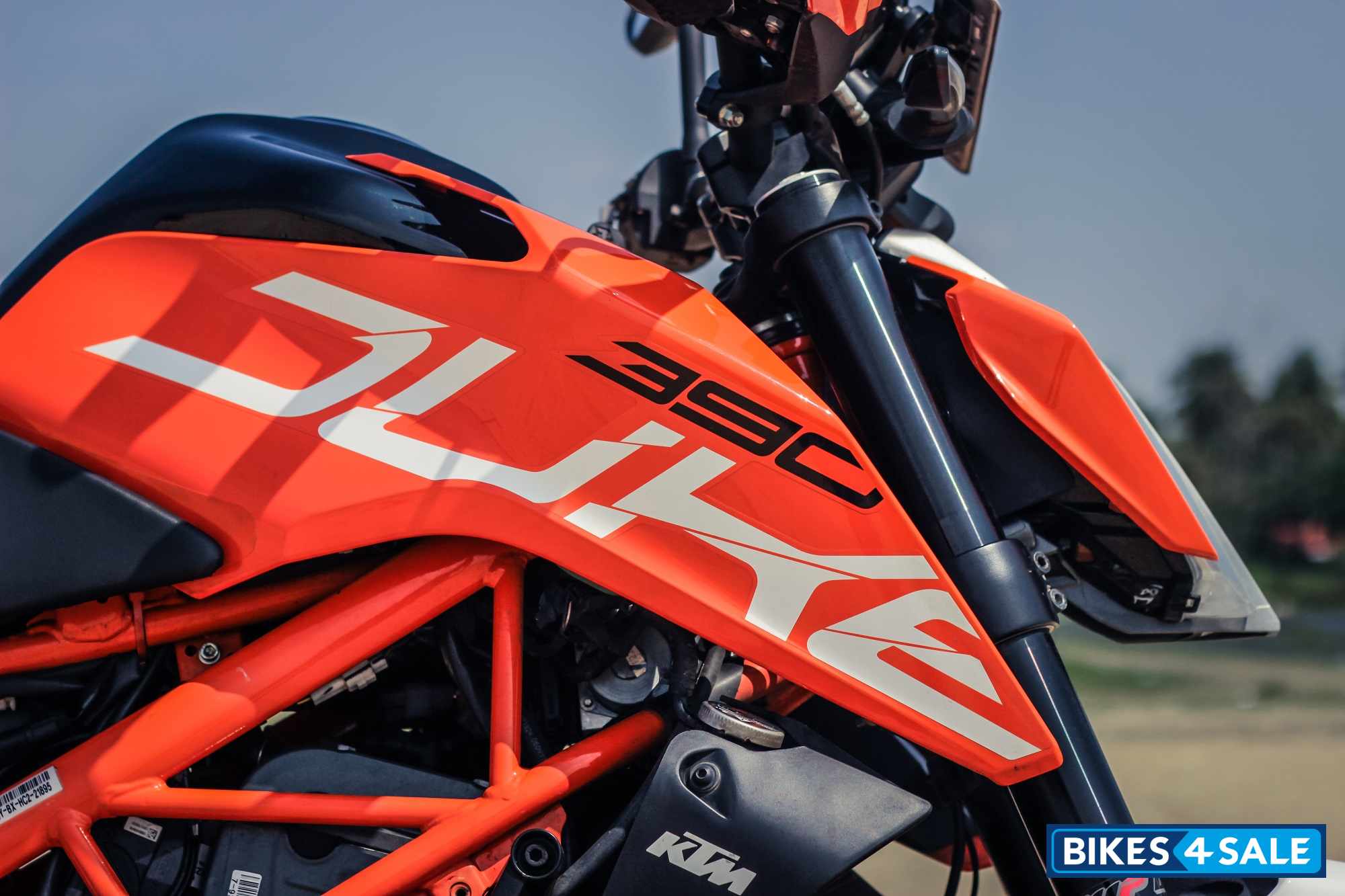 The old Duke 390 looked way similar to the 200 apart from those orange alloy wheels and trellis frame. Therefore, few of those 390 owners were not happy with aesthetics of the bike. However, the 2017 Duke 390 looks distinctively a flagship model with a slew of cosmetic and technical additions. The overall styling of 390 is being inspired by the mighty 1290 Super Duke R. From the very first glance, one could feel how serious and sharp this motorcycle is. The KTM's own raw and minimalistic design approach is easily visible from the exposed steel trellis frame, subframe and rear frame. The muscular steel fuel tank along with the extended fenders are directly derived from the Super Duke R. Moreover, the shape of the fuel tank allows the rider to sit firm and lock the knees on to the machine for proper balancing and maneuvering.

The seats of new 390 look decent, which is also wider and longer compared to the predecessor. It is 830 mm off the ground and easily accessible for all kinds of people. The rear-mounted footpegs and low sit handlebar offer more forward-biased and serious riding position. Furthermore, it also enables the rider to crouch down easily to clock higher digits. 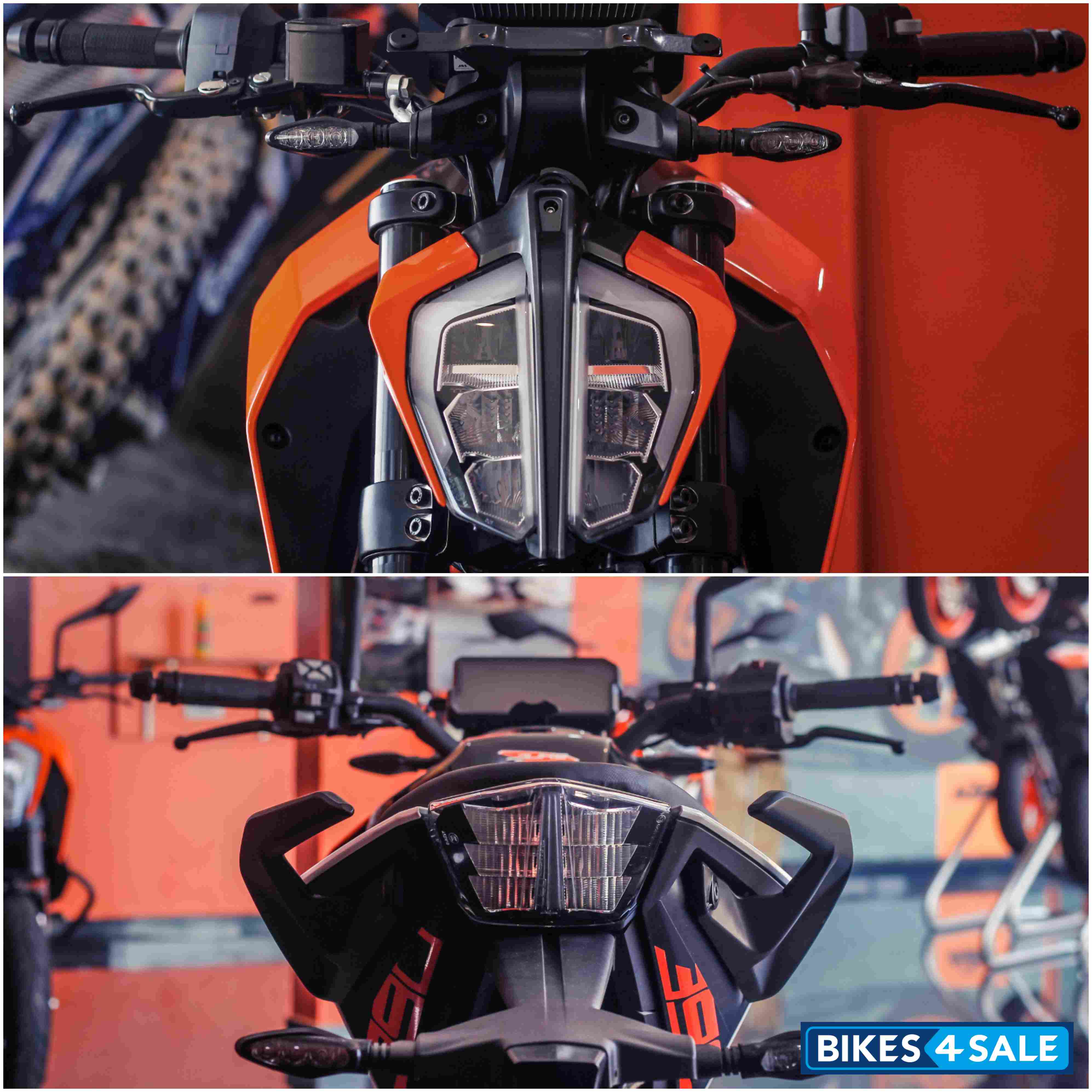 Duke 390 was launched side by side with a new model Duke 250, bearing similar styling and design features. However, the 390 gets some distinguishing features like the LED headlamp, which can be adjusted in three modes. 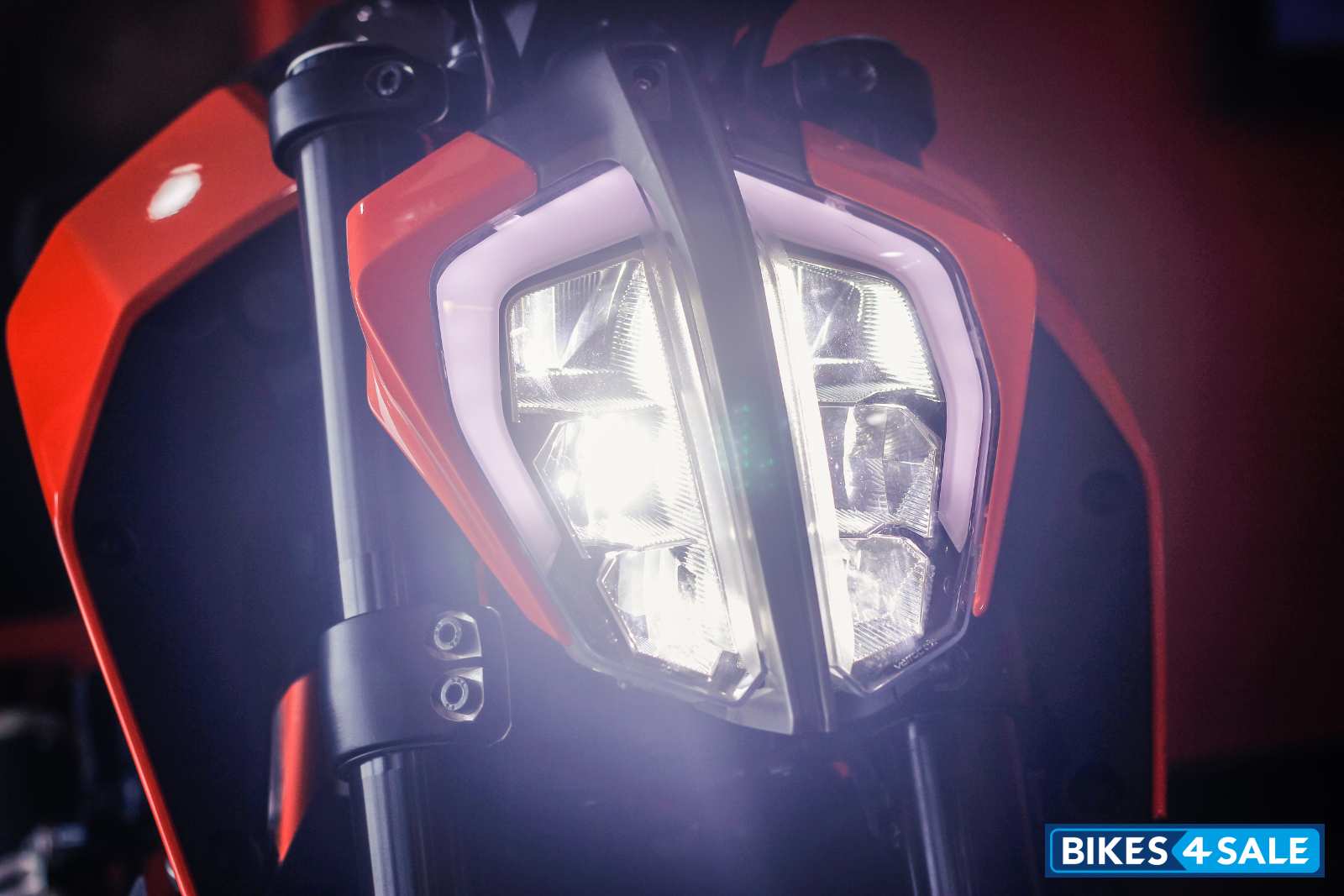 Other cosmetic features include black steel fuel tank, side mounted black exhaust, orange handguards, sharper LED tail lights, split grab rails and new brighter orange wheel panels are a feast for eyes. The new larger TFT display screen is another important addition to the new Duke 390. Four-way navigation switch on the left handlebar controls the screen information. One can easily switch-off the ABS or can select Super Moto option with this selection switches. In addition to that, you can easily connect your smartphone device to the bike via KTM My Ride option. Altogether, the screen resembles something like a handy gaming device with 'N' number of options to play around. 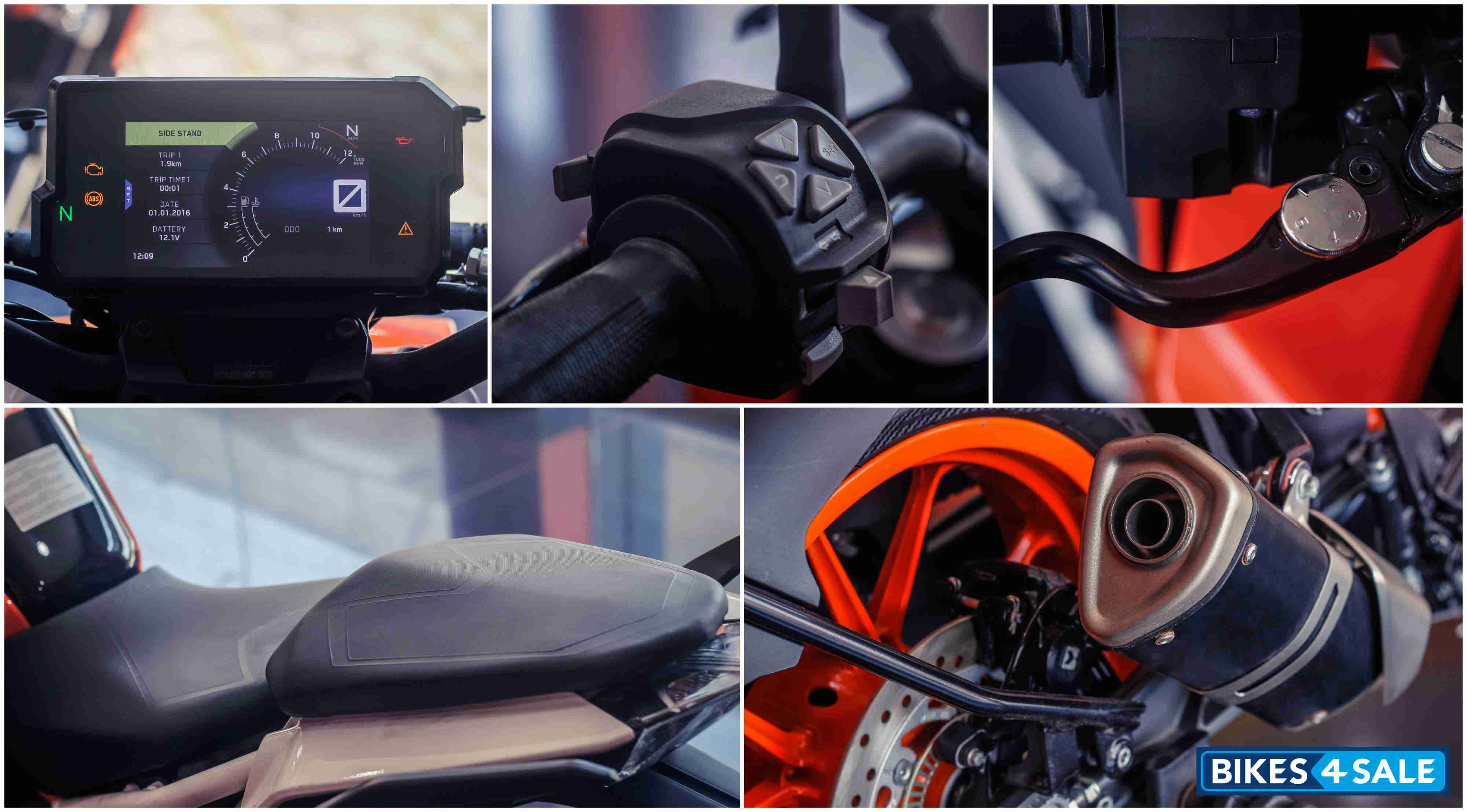 When compared to the old 390, KTM has employed a new open cartridge WP front forks and a new WP rear monoshock in the 2017 variant which helps in encountering corners and uneven roads with much more confidence and easiness. This new suspension set up is far better than the oldies and works efficiently with a wheel travel of 142 mm at the front and 150 mm at the rear wheels. The superior grip over the tarmacs has been offered by Metzeler tyres which definitely requires a huge amount of credits while cornering or doing the Super Moto stunts. 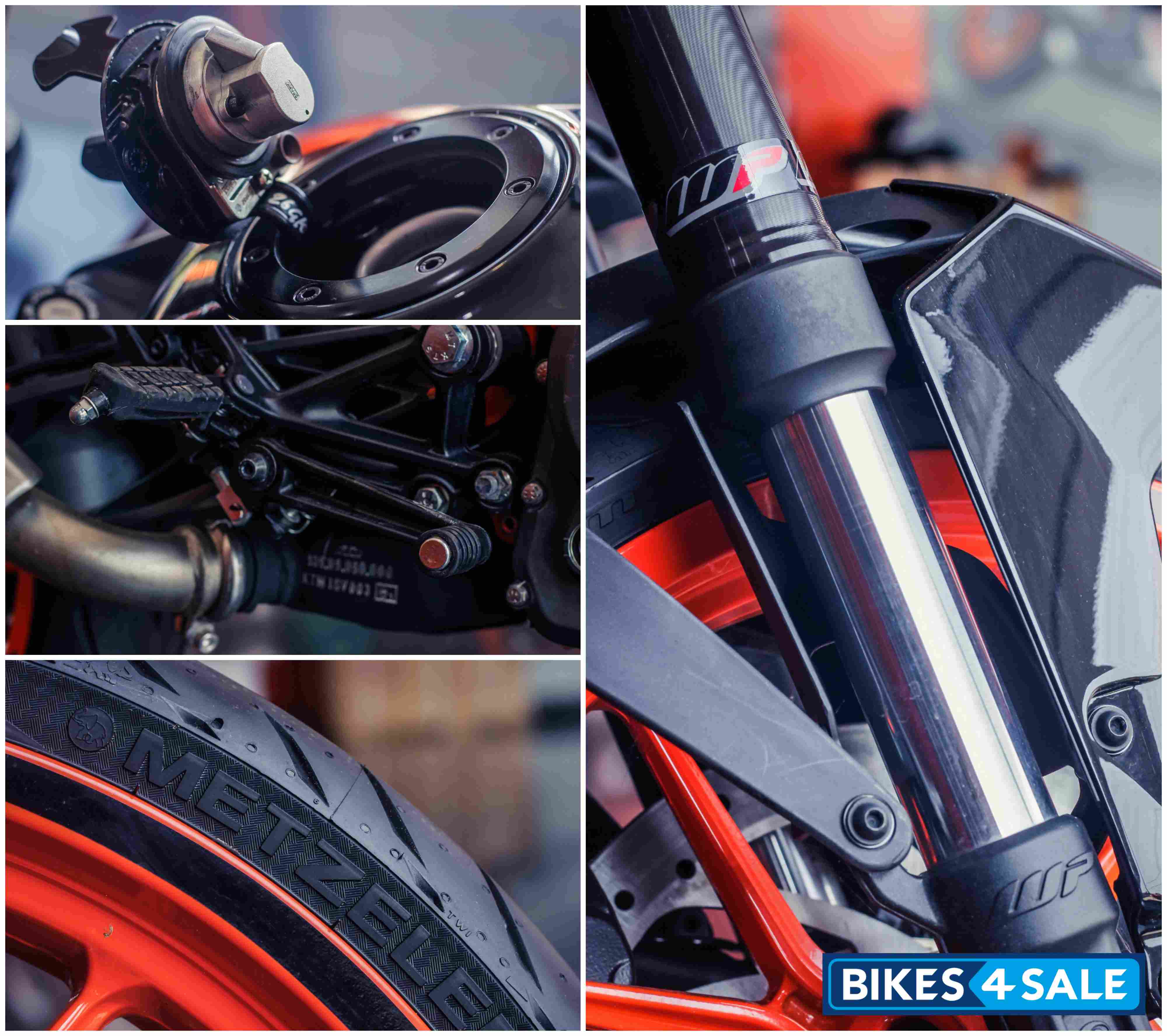 Another interesting fact is the 1357 mm shorter wheelbase of the new Duke 390 which allows the rider to swiftly pass through the traffic effortlessly. Most importantly, one could easily feel the urgency of this machine during every course of the ride. Therefore, the new larger 320 mm rotors with sintered brake pads along with updated master cylinder from BYBRE hosts the massive force to stop this machine. The ABS is a standard feature which is switchable with ON/OFF and Super Moto option. Super Moto enables the rear wheels to slide by braking the front. Altogether, the braking force of Duke 390 is the best and most reliable one you could ever experience in this segment.

The new Duke is 10 kg heavier and it does satisfy the Euro IV emission norms. So, one would expect a bit tamed machine with lesser firepower. Surprisingly, it is as fast as the olde Duke 390. The 2017 Duke 390 is moreover a sophisticated machine, packed with technologies and advanced features. The engine itself is more refined and polished than the older one, which is easy to ride in city conditions as well. Still, the bike wishes to break all the shackles whenever you squeeze the throttle. 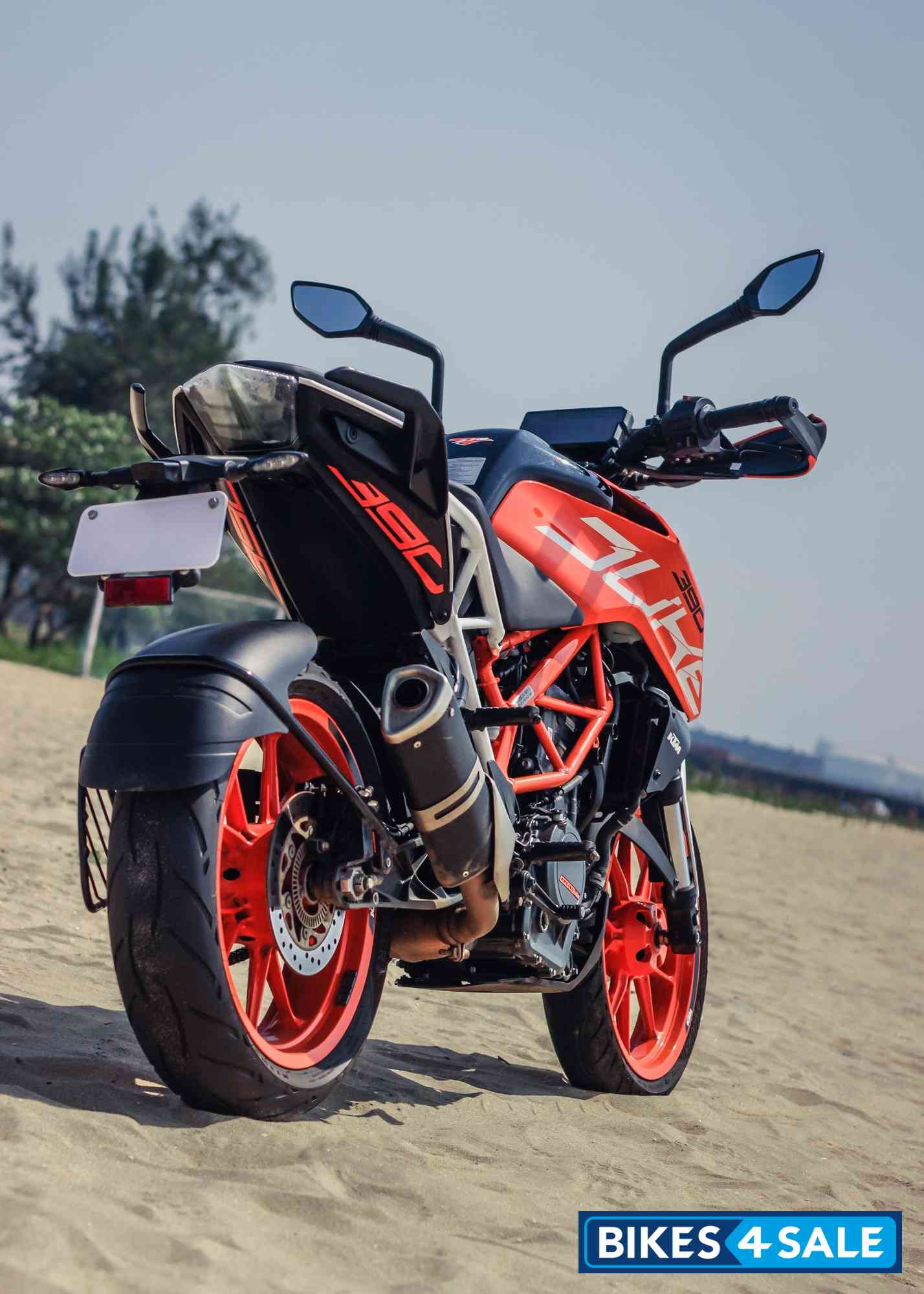 Overall, it is the best motorcycle you will get under 3 lakhs. Moreover, it is the only bike for those who crave for unlimited fun and pure adrenalin rush without looting your pockets. In fact, the number of accidents related to the Duke 390 and RC 390 is climbing in our country. Surprisingly, all the blames are upon these machines rather than those immature or unskilled riders. There is a trend among Indian youth to get Duke 390 as their first dream motorcycle. Somehow, a majority of them are unaware of the ferocious attitude of this bike. Therefore, I will say, "with great power, comes more responsibilities". Drive safe folks.