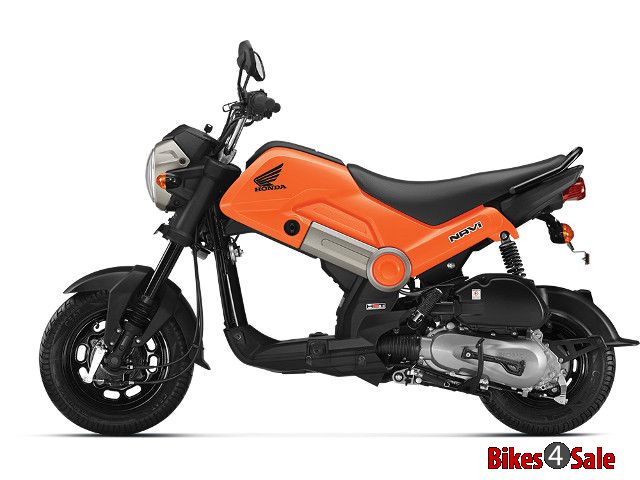 Launched in India in February 2016. Navi is not in production now.

Honda has stopped the production of its scooter Navi and hence the given price is not relevant. If you want to check the price of second hand Navi, try our Bike Valuation Tool. 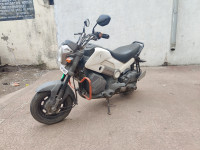 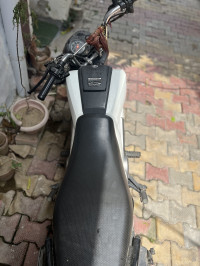 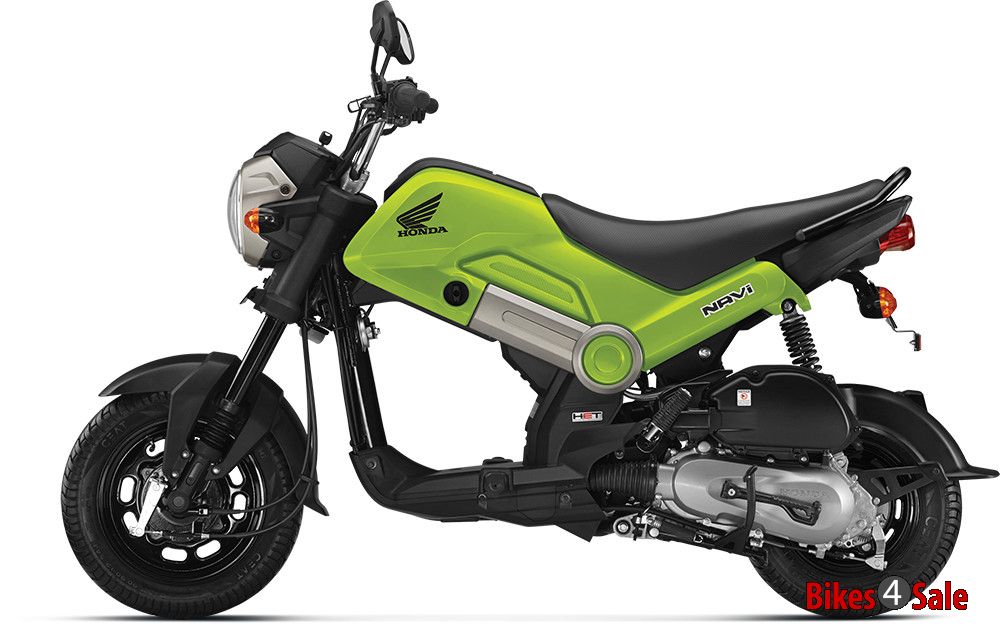 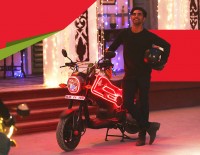 There's a famous saying, “Four wheels moves the body, while two wheels moves the soul”. Riding a motorcycle is risk, but the thrill and excitement from the twisting of a throttle is far beyond explanation. This two-wheeled machines are considered to be one of the most convenient and easiest means of transport. Therefore, we have an array of motorcycles in different shapes, sizes and capacity. Honda Navi is one such two-wheeler, we cannot typecast it based on its looks and styling. 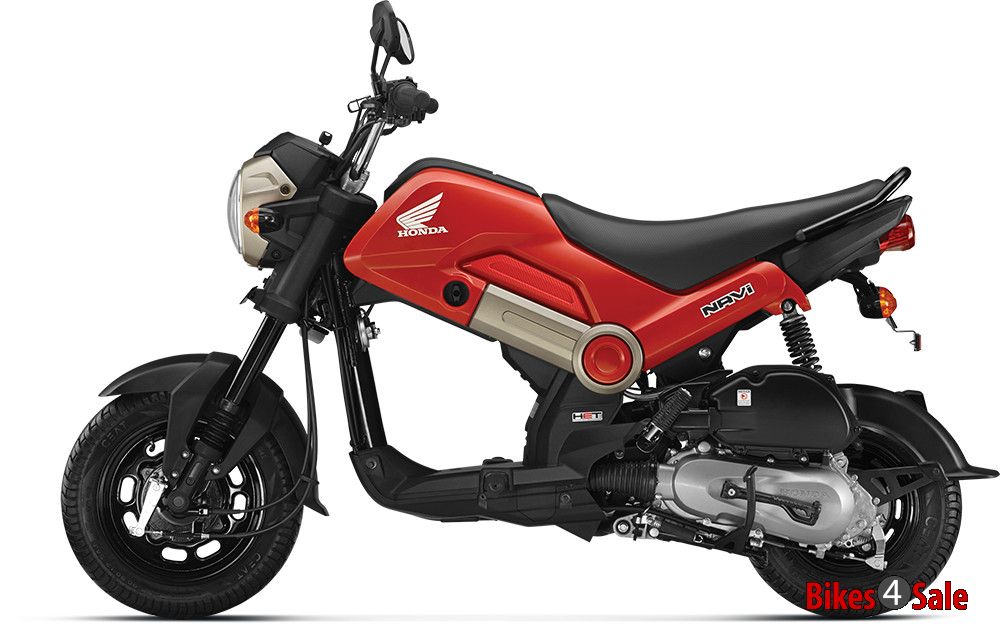 The Design
From the very first glance, its a weird looking two-wheeler. The mixed feeling of is it a bike or a scooter is always in the air. With the looks of a small motor bike and with the convenience of a scooter, it is unlike any two-wheeler one has seen or ridden before. The word unusual sticks very much closer to this model. It starts from the unconventional design towards the placement of each and every feature in this “Moto-scooter”. The single piece fuel tank, on which seats are fitted like overlapping element. The big gap underneath the fuel tank is bit an unusual thing. We can see many scaled parts of a bike in the Navi, which makes it adorable and tempted to try. 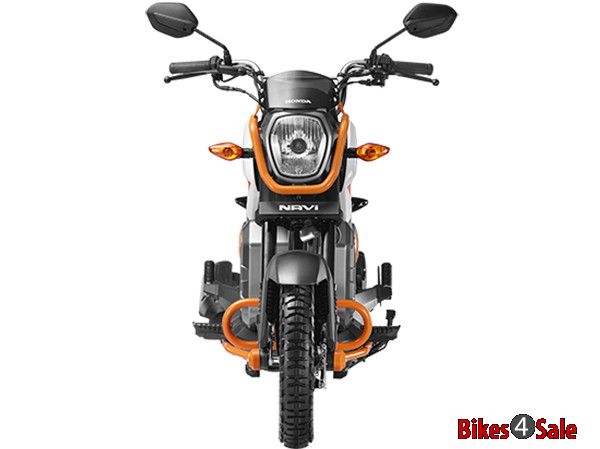 It have faux carbon fiber parts on either sides along with a black and textures plastic parts attached from the center of the tank. Navi also gets a new instrument console, hexagonal headlight and the taillight borrowed from Stunner 125. Altogether, Honda has combined different parts from their bikes and scooters to create something unique and fresh.

Features
In the official website of Honda, we cannot see this model under any of the familiar sections like scooter, motorcycles or superbikes. But it comes under the newly formed section called as Navi itself. Unlike other motorcycles it doesn't have any unique features apart from its weird looking design. The engine, wheels and front forks of Navi is finished in premium black color to give an impressive feel.
Honda offers a wide range of accessories and storage box is one among those, which can be kept well placed in the gap beneath the fuel tank as a storage pocket. The instrument console shows speedometer, kilometer, telltale lights for indicator and headlight beams. Not only that, it features a larger 3.8-litre fuel tank suitable enough for small city rides. 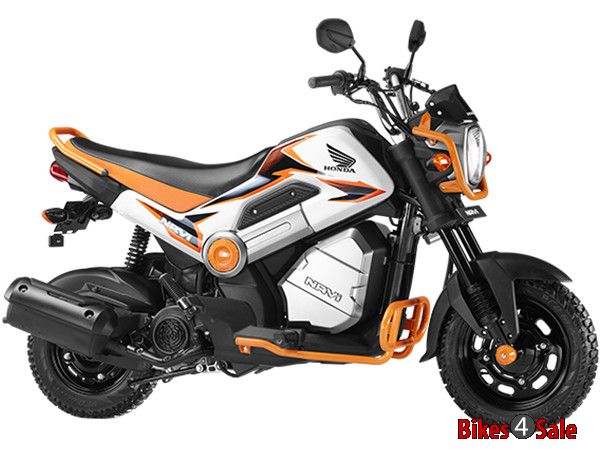 Honda Navi lacks some of the basic features like engine kill switch, headlight pass button or a foldable hook just like a scooter, which may have been good addition to this two-wheeler.

The Engine
Honda Navi is powered by 110cc, single cylinder, air-cooled petrol engine with CVT transmission. This power train has been borrowed from the most popular and best selling scooter, Honda Activa. The power delivery of this unit is instant and responsive. It delivers a maximum power of 8 Ps @ 7000 rpm and a peak torque of 9 Nm @ 5500 rpm, which is comparatively higher than the Activa. This engine is also powered by the renowned Honda Eco Technology, which makes it fuel efficient and smooth to operate.

Suspension, Chassis and Braking
Honda Navi is constructed around underbone type frame work, on which engine and all other parts are mounted. It gets a telescopic forks in the front and spring loaded hydraulic type suspension at the rear. It uses the same 12-inch wheels found in Honda Activa 125. This moto-scooter depends on 130mm drum brakes at both the ends for smooth and efficient braking. This particular model lacks Honda CBS braking system found in almost all scooter variants. 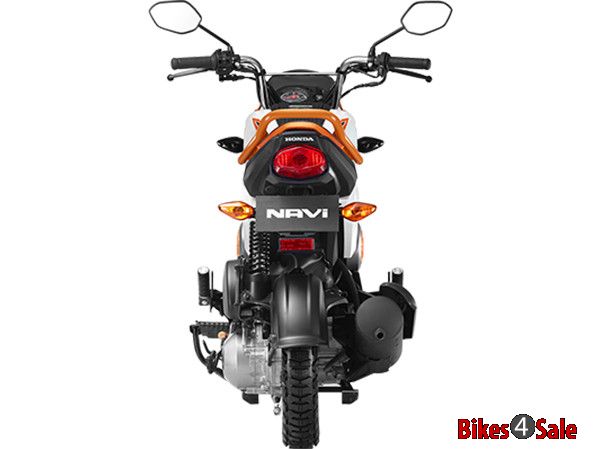 The Verdict
Honda products are well know for their engineering and built quality. And Navi sticks close to their recent standards in built quality as well. The ride and handling qualities of this two-wheeler is good and very responsive with and without the pillion. Unlike scooters, it is responsive on throttling as well as nimble on handling. With the introduction of Navi, Honda has broken all the boundaries regarding the design of a motorcycle. They has created something weird looking and more fun to ride. This mini concept motorcycle is worth every money.
User Reviews of Navi. Write Your Review
yes i love to buy please share diller near barasat
By Prasun Chakraborty on 29-09-2020
I am owning this vehicle for the past 3 1/2 years. I love it as it is very easy to manoeuvre particularly in city traffic. It has pick up & all other features as in Activa. The only drawback is it's small petrol tank. But it is not a big issue as we have petrol bunks at every 1 km in city.
By Mohammed on 26-02-2020