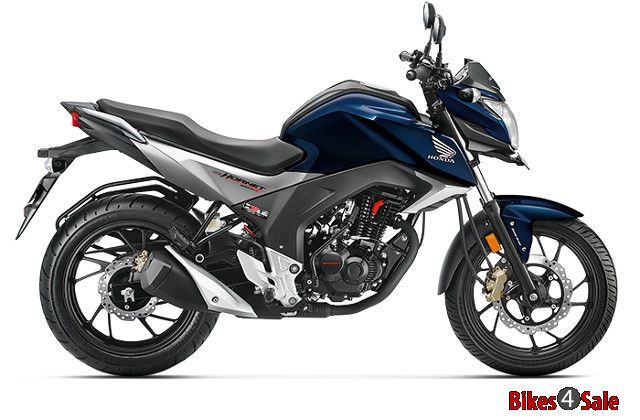 Launched at the RevFest in 2015, Honda brought in its iconic and 'fun' tagged motorcycle to India. Featuring an all new design unlike the rest of the Honda models seen here in India, the motorcycle gets sharp detailing with edgy cladding and aerodynamically molded elements found from the front to the tail. The bike had first featured as a prototype, known as the CX-01 at the AutoShow in Delhi, 2014, and the Hornet's entire design language seems directly inspired by the CX-01. The engine powering the Hornet is the 163cc motor found on the new Honda Unicorn, which is doing brisk sales in India. As the Indian two-wheeler market saw a rise in the number of 150cc-160cc based bikes, Honda was the only remaining candidate not to have brought a bike to this class. Honda has added mechanical changes to the bike that lets the power delivery be on tap – highly essential for city riding. With Honda's dynamics and proven track record of building world class bikes, the Hornet CB 160R is surely worth the investment and to sum it up in a single word – crowd puller – would do it justice.

The 2016 Special Edition Hornet was introduced in 4 new colors with some hike in the price.

Book a Test Drive through Bikes4Sale and we will try to get you the best offer for Honda CB Hornet 160R. 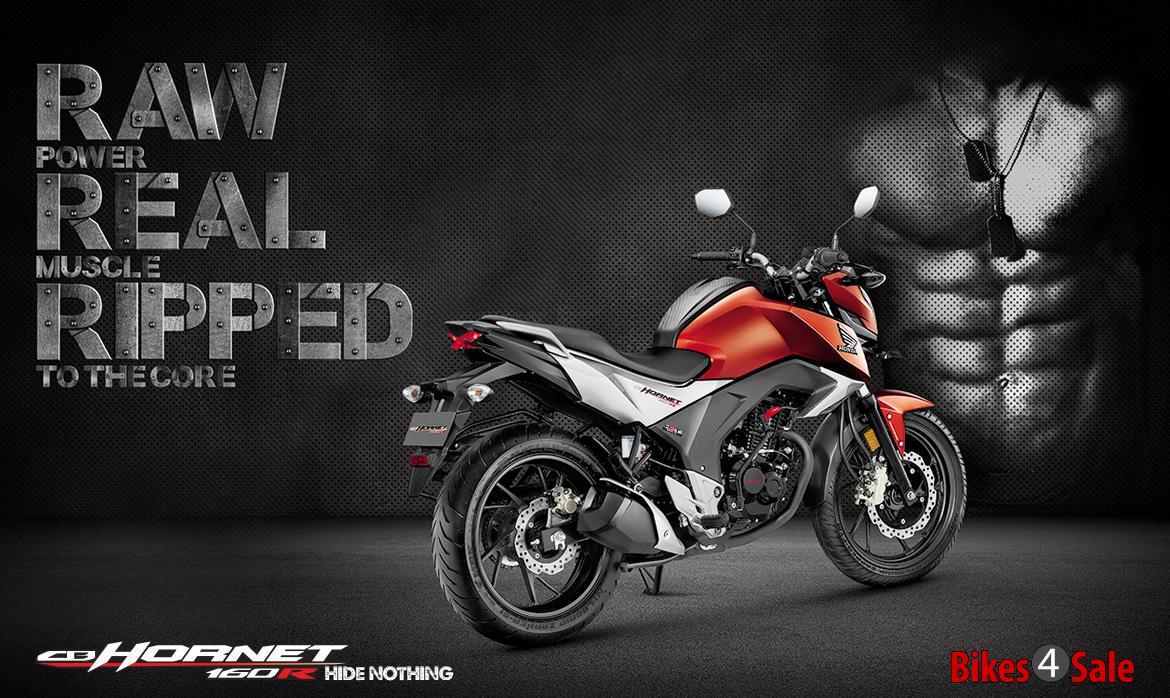 After concluding their long term relationship with Hero by 2011 August, Honda is raising huge competition to Hero, Bajaj, TVS and other foreign brands in the country. Ever since Honda launched their one of the best seller Unicorn in the market, they are considered to be the pioneers in 150cc segment. But after their success story with Unicorn, nothing has worked for them in recent years. Couple of their models in 150-160 class lacks the DNA to attract large volume of customers. But the introduction of CB Hornet has helped them to gain back their lost grounds. CB Hornet 160R is off course a crowd puller with its visual appearance from tail to head.

There are numerous talking points about this particular Honda.

The Way It Looks
CB Hornet is a fresh looking Honda in many ways. Unlike other Honda models, this one implements new age design and styling, to put out a real fight to Yamaha FZ and Suzuki Gixxer variants. The all new sharp & edgy headlamp with bit aggressive and sporty looks is eye catchy.

It is said to be the first Honda with a naked street fighter looks featured in the 150-160 class. The chunky fuel tank with forward leaning shrouds and carbon patterned plastic black strips on the top makes it even sportier and muscular.

From the back, X-shaped tail lamps are appealing and to an extend it is the most attracting feature of CB Hornet. The digital instrument cluster of this bike displays all necessary information required for the rider.

In order to bring out a sporty character, Honda has used a silver finished exhaust kit for Hornet. The split alloys of this bike also add more premium and sporty feel. This bike looks expensive due to its high quality fit and finishing in cosmetic department.

The Powertrain
Hornet is powered by the same 162.7cc, 4-stroke, SI engine that drives CB Unicorn 160. The engine delivers a maximum power of 15.44 bhp @ 8500 rpm and a peak torque of 14.76 Nm @ 6500 rpm. These figures are better than Unicorn as Hornet uses a reworked carburettor to bring out more torque and power from this same engine. Engine is mated with a 5-speed manual gearbox and transmits the power to rear wheels via chain drive. Top speed of Hornet is 110 kmph whereas Unicorn stops at 105 to 106 kmph. It satisfies a BSIV engine compliant by using a reworked exhaust and usage of a catalytic converter. Mileage of this model is 52 kmpl, thanks to the Honda Eco Technology.

Suspension and Braking
Hornet features telescopic front suspension and monoshock rear suspension. The bike uses a fatty rear tyres to give a supreme terrain command. CB Hornet too uses their famous Combi Brake System, which has made cruising in higher speed, more reliable. Not only that, high variants features disc brakes at both the ends, where discs have been cut into petal shapes to dissipate heat, which is a necessary component for bikes these days.

Ergonomics and Ride Quality
The instrumentation used in CB Hornet is borrowed from CB Trigger, which is not at all user friendly and it lacks kill switch. It uses wide and flat handlebar with low seating and rear-set foot pegs, which gives a comfortable upright driving position for the rider without any back ache. The tank and the seat cushion is designed in a such way that, it can fix the rider towards the bike and aids aerodynamics of the bike. Like the rider, Hornet equally comforts the pillion. The rear split grab rails are easy to grip for the pillion rider.

Verdict
Honda CB Hornet 160 R is a good looking and quality built Honda in many ways. Honda has added many of the new styling features in their Hornet in order to nullifies some of their black marks from earlier models. It might be heavier than Unicorn, but lighter in terms of handling. The quality and reliability of Honda is famous and they have added some elements of premium in this model. It may be priced higher than Suzuki and other Bajaj, Hero models, but it is a bigger and fancier looking comfortable motorcycle than all the alternatives currently available here. One thing Honda was lacking with the prior models was to attract the youth and now they are succeeded in developing Hornet which is really a youth oriented bike. It is a well equipped alternative for Yamaha FZ, Suzuki Gixxer and Bajaj Pulsar AS.
Test drive reports, reviews and news
User Reviews of CB Hornet 160R. Write Your Review
I will need indian original tax com price....Manikandan..pn in Kerala...... jai hind .... Proud of Indian... standing Chennai...!!!
By Manikandan Pn on 30-11-2017
Worst bike no milage 2nd gear weary low pick up i think fz 2.o is good
By Naveen G S on 13-10-2016
Please add smoothness in gear shifting mechanism unlike unicorn 160cc and reduce the vibration on foot rest.
By Ganesh on 14-03-2016
HONDA IS A NICE COMPNY I PURCHES HONDA HORNET 160R IS A VERY POWERFULL BIKE NICE SMOOTH AND IMPRESIVE LOOK DESIGN VERY NICE THANKS
By Savan on 05-03-2016
It is little costy hornt 160r should be carry out minimum top speed of 120 km/h which is common speed in this kind of segment. One more thing is kick strat and engine kill switch to be add in cb hornet 160r for the best result in indian market
By Imran on 07-02-2016
The overall look and feel of the bike are appealing ones. It feels like Honda finally came to understand that having a strong reputation and a well known name will not always be enough. The design Philosophy for their Indian bikes needed to be re-thought thoroughly. I guess that's a good sign. It's hard to produce perfection. Many factors are gamble-like and it's hard to predict the customer reaction toward a new lunch. Yet this one could possibly have it's share of good appreciation in the current market. Few factors are total letdown though:
The absence of Kill switch, the instrument cluster could have been remade to flow smoothly with the embellished new fascia.
The handle bars are no match for even a pulsar 150.

Let us see how it fairs in the market.
By Banaswadian on 04-01-2016
Thanks for Lunched by Tripura, this Hornet the best bike of my Life. Mein bahat khus ho es bike ko chalake. So comfortable fill.
By Tutan Sarkar on 04-11-2015
pleseee launch these bike i am deadly waiting for it
i love the brand honda and its engine reliability but looks always matter and thesee bike make my wish true
By Arunesh on 29-10-2015
I LOVE SO MUCH HONDA BRAND. THEN IT IS VERY COMFORTABLE . SO AM I WAITING TO CB HORNNET 160R. THIS BIKE LOOKING VERY NICE. THANQS TO HONDA TECHNOLOGY
By Rambabu Dasari M.a.,m.s.w.,mjmc., Srikakulam on 03-10-2015
I love . honda bike. this bike look r very nice. plz. lunch in india. i m waitng for this honda bike.
By Pavan on 03-10-2015
Silencer should be much longer. So that all categories of people likes the bike. Also looks bike much good to Indians
By Prashanth on 21-09-2015
An engine on and off switch would definitely raise our comfort and your bike sales by not less than 15% please try to make adjustment or customization options atleast.Except that it is a very great bike.
By Aravind on 20-09-2015
Looks very nice & dynamic design, Honda is always known for reliability in Indian riding conditions. Pricing will be instrumental in selling this product as we have to wait & watch. Awaiting further details.
By Sushil Sarandkar on 17-09-2015
Good looking bike, will be very competitive machine in 150-160cc segments from other brands. I personally impressed with muscular tank. I am waiting for tis good designed bike to purchase. Honda plz display t launching date bcoz al bike lovers r waiting for tis stylish model.

Congrats Honda
By Gk Yadhav on 17-09-2015
Nice bike. Honda hornet 160r is one of the best stylish bike model. I'm waiting for bike.
But I was confused bajaj bulsar is most popular bike in India so which bike value of money.
By Sundar on 14-09-2015
LOOKS LIKE A BIKE I WAS WAITING FOR FORM HONDA, WOULD HAVE BEEN BETTER IF DISCLOSE AND DISPLAY THE COLOURS, ALSO AN EARLY AVAILABLITY IN THE MARKET WOULD BE APPRECIABLE !
By Suresh Sheoran on 04-09-2015
Right now don't have efficient 150cc-160cc bikes in honda so you should release this bike ASAP otherwise you will never reach the current market trend.and Unicorn 150cc was stopped it was big blunder mistake from honda side.
By Vasu on 28-08-2015
Pls add engine kill swich more muscular front forks and fuel injector for the next upgraded version .Change the digital meter add more featchers on digital meter .and overoll dont feel the bikes look like a trigger or unicorn whn we see hornet on roads.yamaha fz and suzuki gixxer are the most selling bikes in this segment.so pls add the combined features of those 2 bikes in cb hornet.indian people's first suggest always honda bikes Bcoz we believe in the build quality in ur company.we hope cb hornet 160 is a full featured bike in this segment.concentrate in the gear box also cb unicorn gear shifting is not that much smooth
By Arun on 25-08-2015
Looks like it is the same as Unicorn with some design changes. Will they discontinue Unicorn once this hits the market?
By Anshuman G on 04-08-2015
Tell us why you love or hate CB Hornet 160R