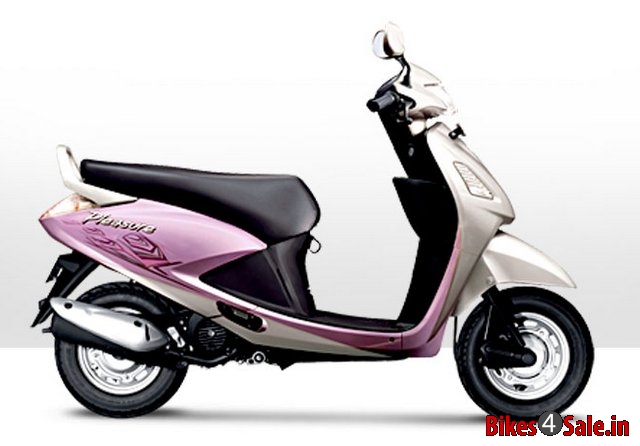 Why just boys have all the fun? Penetrating to the Indian scooter market, Hero Honda (Now Hero MotoCorp) unveiled the Pleasure in 2005. The scooter became more than fun for many scooter lovers across the country. Lady rider commenced adoring the new femininity of the Indian streets. The Pleasure is coupled with a 102cc, Air-cooled, 4-stroke single cylinder OHC engine. The scooter is capable to deliver ample power of 5.03 KW @ 7000 RPM and enormous torque of 7.85 Nm @ 5000 RPM. It has automatic transmission that simplifies the ride much easier in cities. The scooter brings a stunning figure of 45 kmpl.

2013 Pleasure:
Hero launched the updated Pleasure with new looks and features. Still, it's the same engine that powers the most successful scooter of the company.

Book a Test Drive through Bikes4Sale and we will try to get you the best offer for Hero Pleasure. 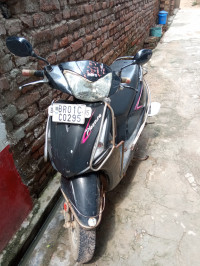 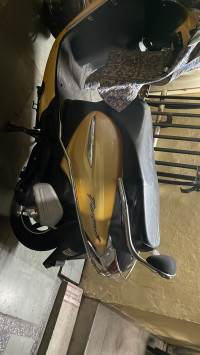 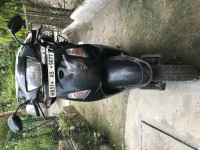 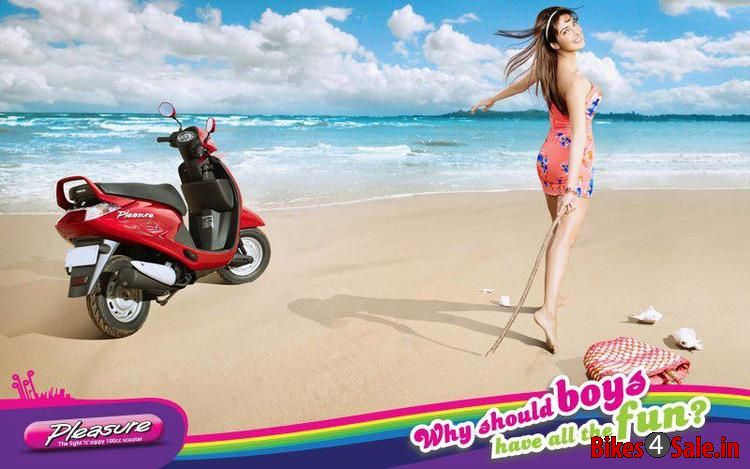 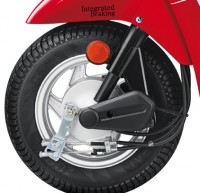 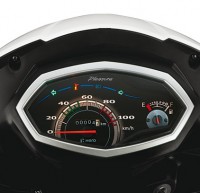 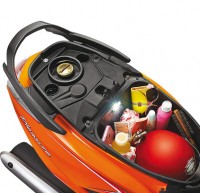 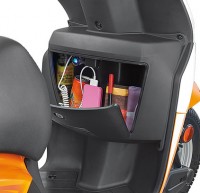 Hero Pleasure is said to be the best selling scooter model for ladies. It was launched in 2005 under the banner of Hero Honda. From 2011 onwards it is one of the most wanted two wheeler of Hero MotoCorp. Pleasure came into the Indian market with a tag line of, “Why should Boys Have All The Fun” indicating it as a scooter built solemnly for women. 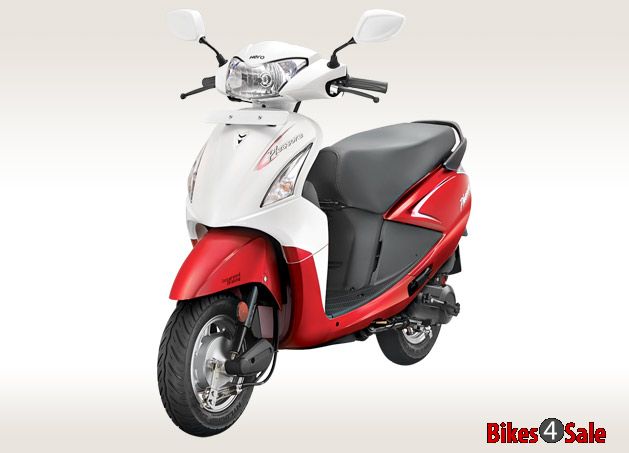 Design and Features
From the very first look it is clear that, 'it is a light and zippy scooter'. In order to keep the weight a bit low, Hero has used lightweight material and minimal body works for this scooter. No unwanted body stuffs are used in this bike. Hero upgrading this scooter in 2014 by without any changes to the core design profile. 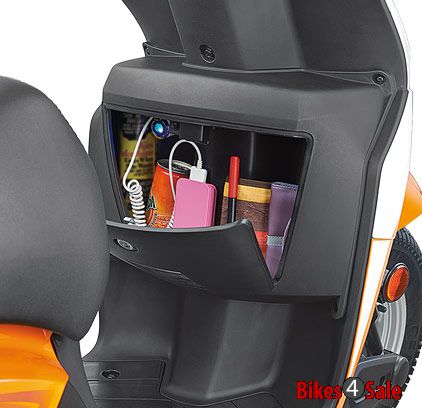 It looks same to the older Pleasure but has fitted with many advanced and user friendly features. One of the notable cosmetic change is their two-tone paint scheme. In order to make it more appealing, a variety of 10 paint jobs are available including 6 variants of dual-tone paint job. One of the appreciable factor of Pleasure is that, it always looks compact and friendly from the front. 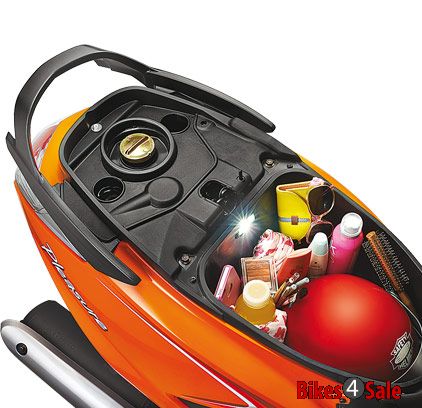 The updated pleasure gets an Integrated Braking System, which has been absent in this particular scooter for a long period. This system works by triggering both the brakes when rear brake lever is depressed, which in turns improves the stopping distance and reduced the chance of accidents. In the instrument console there is an addition of side stand indicator, which has been included as a part of customer feedback. Other updates for the new Pleasure includes lockable glove box, a light in the glove box, combination ignition lock and seat opening mechanism, new instrument console and a mobile charger socket. 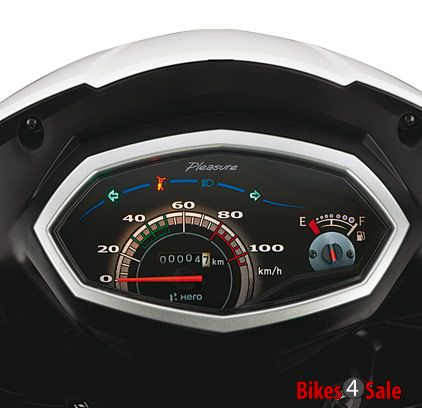 Engine
This light scooter is based on the Hero's very famous 102cc engine. This air cooled, 4-stroke, single cylinder engine delivers a maximum power of 6.91 bhp @ 7000 rpm and a peak torque of 8.10 Nm @ 5000 rpm. On standard conditions, the maximum speed of this scooter is 77kmph. The figures and stats of this particular scooter is all what required for lady riders and it is well maintained by the weight to power ratio. Hero is using the same old engine for the updated version, without making any mechanical changes to it. 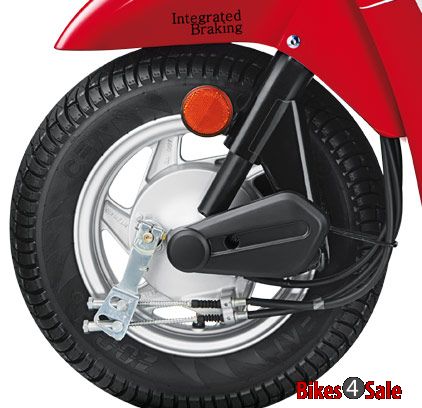 Chassis, Suspension and Braking
Pleasure is built around the high rigidity under bone type frame, which is found in all other scooters of the Hero. It is one of the successful and most reliable chassis, that Hero has ever developed. On moving to the suspension department, a bottom link with spring loaded hydraulic dampers are used at the front and unit swing with spring loaded hydraulic dampers are used at the rear. Stopping force of the scooter lies over the 130mm, internal expanding shoe type brake at both the ends. As described earlier, Integrated Braking System is also used in this scooter for superior braking. 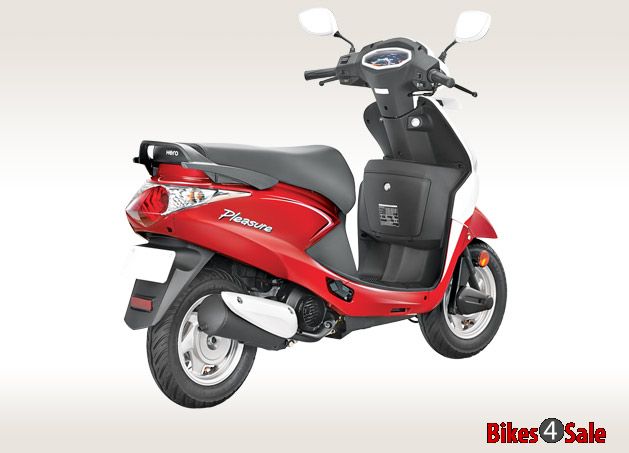 Verdict
Pleasure was the very first scooter to roll out from the Hero Motorcycles. As a market strategy it targets the female riders of the country. It has been running successfully on the Indian roads for more than 11 years without any wobbles. The mileage and reliability of the engine are the two important pillars for Pleasure. With the latest upgradations and additions of newer features, the desirability of this scooter has increased further. The engine may lacks some power at the high-ends, but it is truly the best scooter in India for ladies.
Test drive reports, reviews and news
User Reviews of Pleasure. Write Your Review
i love hero pleasure
By Sekar on 22-11-2020
HERO
By Lakhmi Chand on 09-04-2019
M having pleasure since 2005. It's my favourite. Again m going to buy a new pleasure for me
By Deepali on 13-05-2016
Pleasure scooter is best bike for lady/girls also all homember's . I think a family/home should be buy it.
By Ummed Jangir on 08-09-2015
Dafty ride. Easy driving
By Muralitalasu on 01-08-2015
Want to me plesure bike
By Guru Das Murmu on 02-07-2015
i love hero pleasure scooter.because it gives pleasure to girls.i think most suitable bike for girls is hero pleasure scooter.keep calm and go your way. best wishes for hero
By Sathsarani Wijesinghe on 15-05-2015
i like my pleasure i advice you too buy.
with happy new year 2015 before 15 day
By Jitendra & Laxmi From Bharadwaj Hero Motors Sainthal on 19-12-2014
best moped for senior citizen.
By Snehal Patel on 28-10-2014
Pleasure has got stunning looks which no other scooter has. It is not bulky as Activa or Aviator. With its compact design, good ride quality and stunning colour variants, Pleasure has managed to find a place of its own among scooter lovers.
By Meenu Thomas on 15-03-2013