Harley Davidson has launched three bikes from its touring line up of bikes, and in total they rolled out 12 motorcycles for the Indian consumers. The HD FLHR Road King is one from the touring segment. And you can book any of the twelve bikes come April 2010 and own one by sometime in June. The dealerships are opened in five cities of India - Delhi, Mumbai, Chandigarh, Bangalore and Hyderabad. The Harley-Davidson FLHR Road is a perfect touring machine, and it is definitely re-modelled in terms of the engine and the suspension of the old classic line of the 60s Harleys.

Looks of the Harley-Davidson FLHR Road King
The Harley-Davidson Road King was first launched in 1994, and the styling was the biggest asset of the bike. The newer version has not changed those looks to a great extent. And even a hardcore Road King fan would not complain about the looks whatsoever. In fact, the Road King has its inspiration from the older version but with tweaks and retweaks and addition of features, the older HD Classics look dull and pale. 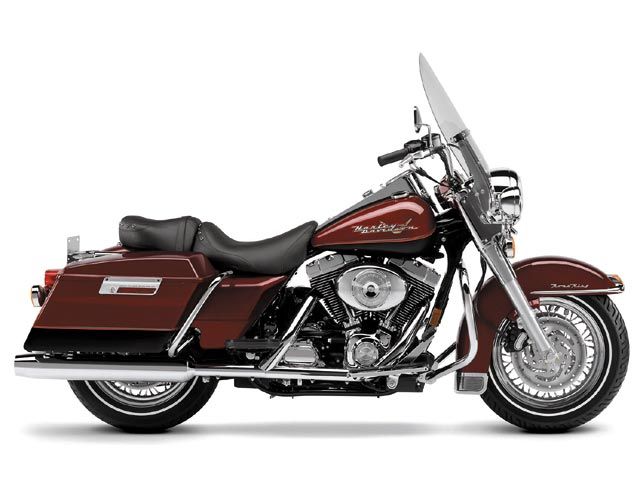 There is one change that deserves a mention: It is in the chassis, which is entirely new. The HD Road King had awesome looks earlier and continues to maintain the same even now. And the styling of HD FLHR Road King appears second to none.

The hard-leather saddlebags coupled with the tooling and the chrome hardware form standard equipment of the machine and the windshield can easily be detached for those days when you'd like the wind to hit your face. With the beautiful logo of HD FLHR Road King on the big fuel tank, this machine looks enviously beautiful.

The FLHR Road King is not a fast machine but commuting on this can be really easy and that says a lot about mile consumption. The suspension has greatly improved with tweaking over its predecessors but it does find itself difficult on harsh surfaces. The HD FLHR Road King; however gains full marks when it comes to handling and at sharp corners the bike is very stable, which makes it perfect for riding. The bike is just the same performer even after long tours.

Pricing of the Harley-Davidson FLHR Road King
You must know that Harley Davidson bikes are exclusive big machines and they actually come with huge price tag, and the HD FLHR Road King is no exception, and it will be available for Rs. 20,45,000, so only a few can dream to own one.

Last word about HD FLHR Road King
One can say that the Harley-Davidson FLHR ROAD KING has an engine that is good, gives a pleasurable riding and the unique sound oozing from the bike will hardly keep you away from this roadie. This is a solid, stylish and powerful beast anyone will love to ride.