Bimota, the tiny but influential Italian manufacturer based in Rimini, has embraced the “naked” sportbike for ages. The Impeto, shown at EICMA, is derived from the ultra-sporty DB7 and is quite a contrast to the Tesi 3D Race Café that was also shown. It’s an ultra-exotic Impeto, which is Italian for impetus, and not impotence. Impotence would hardly be the right word for a naked bike that uses the current 1200cc Diavel engine, with an optional supercharger kit for those times when 160 desmodromic v-twin horsepower just isn't enough.

As of late, Bimota has exclusively used Ducati engines to power its creations. The Impeto uses the previous generation 1198, twin spark Testastretta engine that pumps out a claimed 162 horsepower at the crankshaft. With a claimed dry weight of just 390 pounds, the Impeto should provide impressive acceleration. For those in need of Kawasaki H2-like power, Bimota is also developing a supercharger kit for the 1198 Testastretta engine. The vane type supercharger is made by Sprintex and is compact enough to fit inside the engine’s 90-degree Vee. Bimota has developed the manifold and fuel-injection system in house, which it claims works effectively without the addition of an intercooler. With the supercharger installed, horsepower jumps past 180, but more importantly, torque leaps to around 140 pound-feet of peak output. 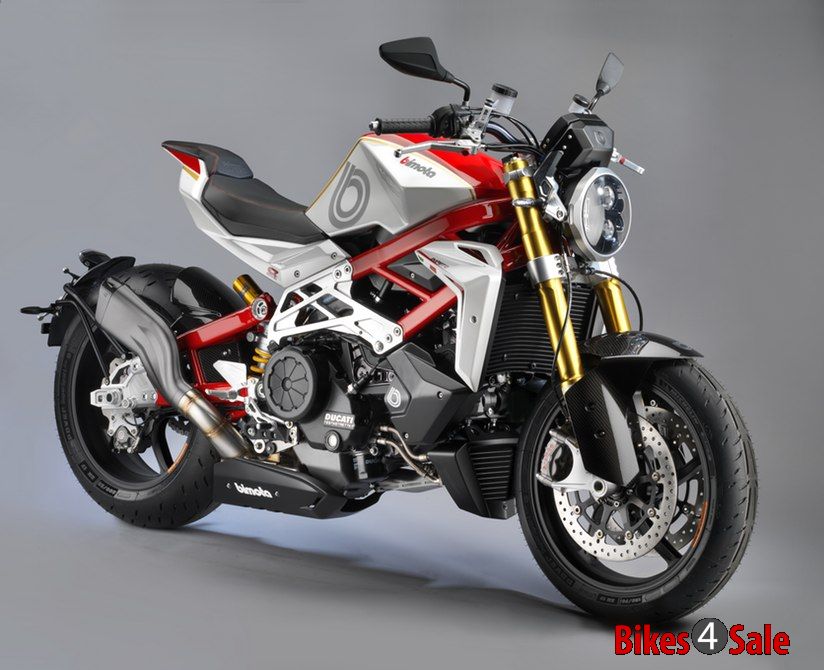 Helping to paste the power to the road is a chassis derived from that of the DB7 sportbike. The frame is a hybrid design with oval steel tubing mated to CNC machined billet aluminium side plates. The swingarm mimics the frame and has the same steel tubing/billet aluminium combination. Suspension front and rear is from Ohlins with a 43mm fork and full-floating link-actuated shock; both fully adjustable. Wheelbase spans 56.3 inches, while front-end geometry includes 25 degrees of rake, but trail is as of yet undisclosed. Braking is handled by Brembo front and rear with twin 320mm rotors and monoblock radial-mount four-piston callipers up front and a single-piston caliper out back. Seat height is a very accessible 31.5in.

The electronics package is improved with the addition of ride-by-wire throttle control, traction control and ABS, and the options list is pretty crazy. You can go for a composite frame and/or swingarm package using lightweight alloy plates and carbon fiber tubes. You can go for a fancy upgraded TFT dash that does things like datalogging and in-built GPS.

There’s also a supercharger kit put on to boost power and torque somewhere between 15-20 percent on what's already a genuine bun-toaster of an engine. The blower runs off a geared drive train in the clutch cover to achieve a high enough RPM to force-feed the motor. The supercharger kit should work with all Bimota bikes using a liquid-cooled Ducati engine. That's a heck of a bolt-on upgrade.
Written by Deryl Cherian.
Last updated on 25-11-2015. Published on 25-11-2015.