Triumph unveils its next generation of retro styled bikes to take on the German and Italians rivals.

The swinging 60’s might be long gone but the Triumph Bonneville seems to keep the party spirit alive, even in the 21st century. This year, Triumph has show all-new Bonnie range, which will be replacing the current generation motorcycles. The line-up includes an entry level Bonneville called the Street Twin, followed by the T120 and the sportier Thruxton. Looking a bit closer at each variant, the Street Twin is powered by an all-new, parallel-twin 900cc engine that makes 80Nm of torque at 3200rpm. The Street Twin goes with a stripped out retro look with alloy wheels and a long list of customization option.

Retro lovers looking for something more authentic will have to stretch their budget for the timeless Bonneville T120 and Bonneville T120 Black. The T120 Black will come with a matt black finish for the exhaust, engine and handlebar. It will be powered by a larger 1200cc motor that according to the company is a ground up design. It dispenses a healthy 105Nm at 3100 rpm, which should be good for effortless cruising out on the highway. Completing the retro look are those wire spoke wheels. Enthusiasts looking for a capable retro styled sports bike will love the Thruxton and Thruxton R. Unlike the older bikes Triumph claims these new Thruxtons have the performance to match the looks. A committed riding position is backed by the same 1200ccc motor from the T120, but tuned to make 112Nm at 4950 rpm. The Thruxton R is equipped with higher-spec brakes and suspension. 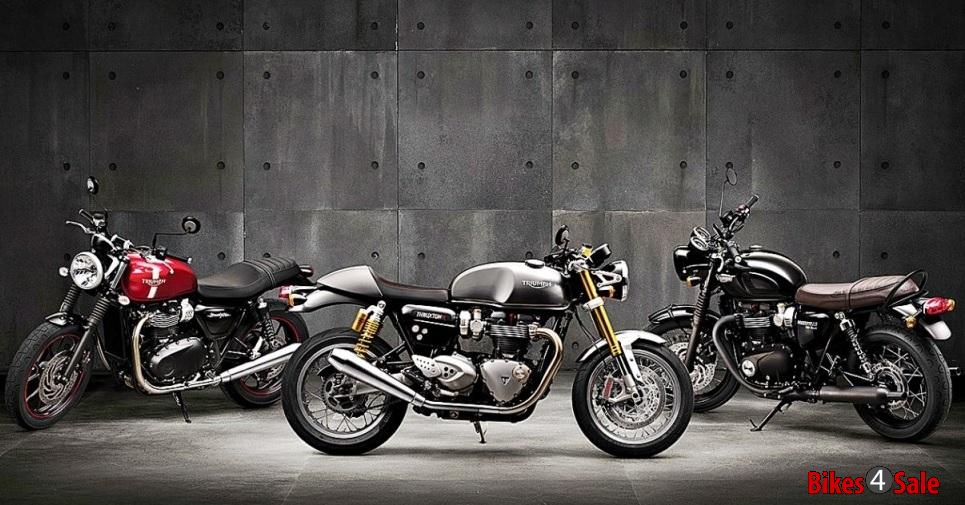 Apart from the mechanical updates, the new Bonnies also receive a lot of tech upgrades, which include ABS, traction control, slip-assist clutch, ride-by-wire throttle and rider modes for the 1200cc Bonnies. By the looks of it, Triumph has squarely positioned the 2016 Bonnie against newer competition from the Ducati Scrambler and the BMW RT90. Triumph has officially stated the new range will be shown at the 2016 Delhi Auto Expo, where the Street Twin’s pricing will also be announced, expected price is around ₹7.5 lakh, similar to the entry-level Bonnie today. The T120 and Thruxton will follow later in the year but at a higher price point.
Written by Deryl Cherian.
Last updated on 04-11-2015. Published on 04-11-2015.