The all-black Indian Dark Horse looks distinctive and is made for the tough riders out there.

The Chief Dark Horse based on the Chief platform. This one has been blacked out to enhance the premiumness of the bike and comes adorned with chrome which gives it its unique look. The tank design of the Dark Horse is quite unique and the distinctive monochrome Warbonnet graphics is seen only on the Indian Chief Dark Horse. Though it looks like a bike from the yesteryears, it comes with a whole bunch of features from today's day and age. So, stuff like keyless ignition, anti-lock braking system and cruise control all make their way into the bike. The bike comes powered by the 1811cc 'Thunder-Stroke' engine and comes to India via the CBU route. Like all superbikes and cruisers, the Dark Horse is also a huge motorcycle and weighs almost a ton. It’s basically a cruiser and is easy to ride, unless of course you want to take one of those tight corners. It’s got a pretty huge turning radius, keeping in mind its mammoth girth.

The design of the Indian Chief Dark Horse is what defines the real character of an Indian motorcycle. The half-covered front and rear wheels along with the iconic extra bulgy front and rear fenders take you back to the 80s and make you realise how beautiful motorcycles used to be, and people at Indian Motorcycles continue to remind that to us from time to time. The overall length of this cruiser makes it look beefy and bulky, while creating a tough presence while cruising down the highway. Large floorboards add on to the vintage cruiser look of this Indian. The Dark Horse comes in Thunder Black Smoke paint scheme and as the name of the bike suggests, it is blacked out from everywhere possible. Adding on the coolness, Indian Motorcycles offers a host of blacked out accessories for the Dark Horse such as 16 inches ape handlebars, custom filter caps, exhaust tips and much more. 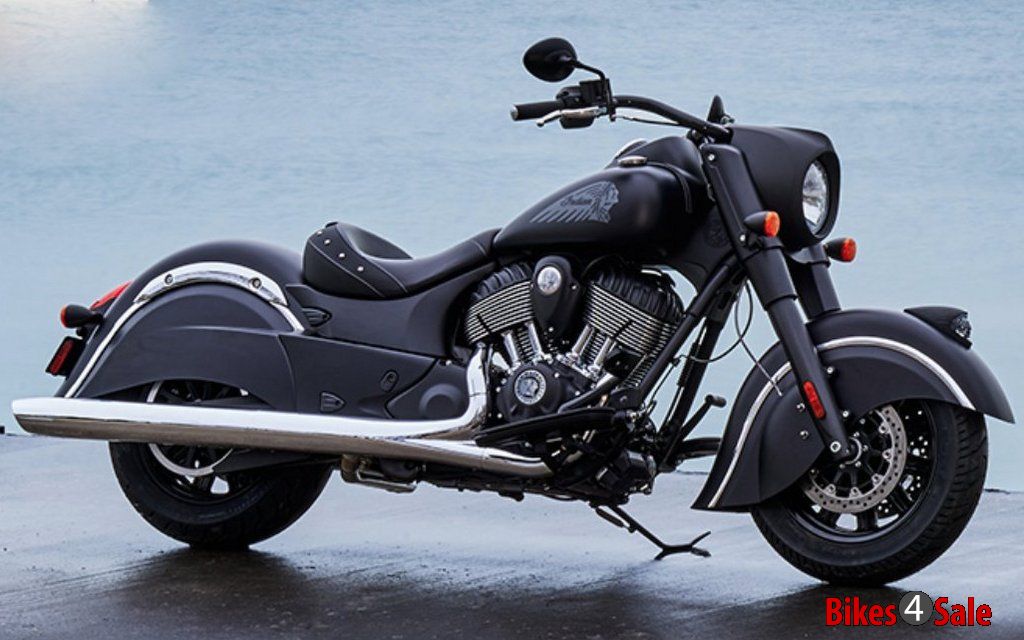 The headlight housing is distinctive from other Indian motorcycles while the LED tail light gets a touch of the Indian logo in it. The rider seat is wide and gives a good feel with the chrome buttons stitched on it. Moreover the fuel tank gets two chrome-finished caps out of which one is real and the other dummy is added by Indian just to complete the remaining one percent of the coolness, portraying how Indian pays attention to the finest details. The Indian Chief Dark Horse also gets the iconic war bonnet on the front fender, which lights up every time the motorcycle comes to life. There is a pinch of chrome added to the Dark Horse as well. The long dual-exhaust system gets chrome finish along with the Indian badge on it. 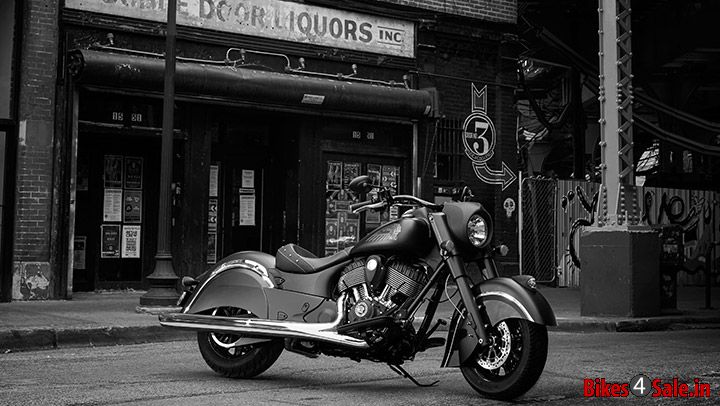 Turn on the ignition and the war bonnet on the front fender lights up. This would certainly remind you of the Spirit of Ecstasy found on the Rolls Royce bonnet. The massive Thunder Stroke 111, 1,811cc engine has keyless start. You do have a computer-like ignition button on the tank, but don’t really need to press it. All you need to do is keep the key on your person, and press the starter button on the sublime switchgear. The 49 degree V-Twin, coupled with the proportionally designed exhaust pipes, roars to life. The Dark Horse doesn’t disappoint in the performance department either. The engine is fuel-injected, and uses a pushrod system to control its valves. As a result, a bucket load of torque, which goes up all the way to 14.1kgm at a low 2,600rpm, is delivered instantly. 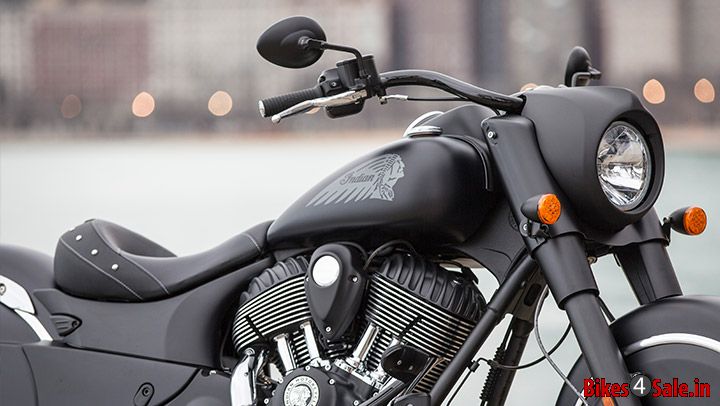 Coupled to the engine of the Indian Chief Dark Horse is a smooth-shifting, six-speed gearbox. Power to the rear wheels is transmitted via a belt drive. As expected, the powerful cruiser pulls strongly in each gear, and can cruise with ease at speeds over 160km. Finding a comfortable position is super easy. The low seat lets you easily plant both feet firmly on the ground. The pulled back handlebars let you sit straight and comfortably. Even the footrests are placed close enough to keep slightly smaller riders in comfort. The Indian Chief Dark Horse weighs 357kg, and has a super-long wheelbase, which make this motorcycle quite a challenge to manoeuvre in our riding conditions. It takes a considerable amount of time and mental resources to dodge potholes and errant traffic on our city roads. Thankfully, the bike gets Dunlop Elite tyres which are grippy, and the safety net of ABS brakes, which work together to slow down this mammoth motorcycle quickly. 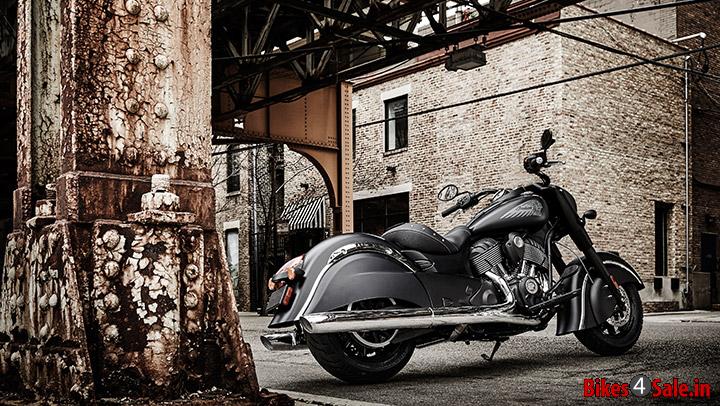 Although the Indian Chief Dark Horse is so large, it is not ponderous. The tight chassis, with the wheel covers acting like a part of it, and the well-tuned suspension perfectly balance cornering and pothole absorbing duties really well. The seating position and weight distribution of the motorcycle are both quite neutral, and make it easy to ride. The Indian Chief Dark Horse is a motorcycle where art, modernity and thoughtful design come together in a sublime way. Indian has managed to make it look and feel like the original cruisers it made in 1901, but has seamlessly managed to add fuel-injection, ABS, cruise control, digital readouts, and even a power button on the tank. 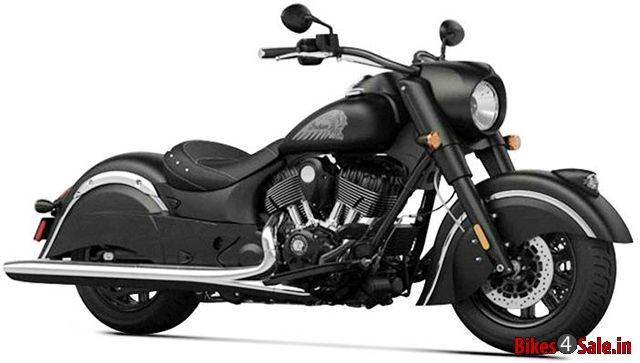 Overall, the Indian Chief Dark Horse being the lightest and one of the youngest of Indian’s motorcycle line-up, has a combination of both, a classic vintage and bold dark looks that is well capable of turning heads easily. With top notch quality components and excellent riding dynamics, the Dark Horse proves itself to be well capable of standing head to head with other top of the line cruisers out there. At ₹23.30 Lakhs this cruiser would be loved by enthusiasts who are passionate about travelling.
Written by Deryl Cherian.
Last updated on 03-11-2015. Published on 03-11-2015.