A high torque adventure tourer, perfect for the rider who doesn’t stop where the tarmac ends, with power to lead you exactly where you want to go.

The standard operating procedure while approaching a corner is to slow down, keep the motor churning in the middle of the rev range, lean in and whack the throttle open for maximum exit speed. We do it all the time, but this time around the tail wagged a bit. And it was enough for us to go easy on the gas. The Benelli Trek Amazonas 1130 is one torquey motorcycle, and it puts its power down in a savage manner. You won’t mistake the Amazonas for any other motorcycle. Italian design flair is evident all over, and this is one of its strong points. The styling takes its cues from the rest of the TNT family, and that’s a good place to start. The three-way adjustable windscreen merges nicely with the front fairing on the lowest setting, while the rear view mirror-mounted turn indicators are a neat touch. Completing the adventure-tourer package is the alloy bash plate that protects the engine from debris while off-roading, hand-guard and spoke wheels. The dated instrument cluster design is a tad disappointing, and while it’s easy to read and throws up info that can be ingested at a glance, it does look out of place.

The Amazonas shares its 1131cc in-line- triple cylinder motor with the TNT 1130 R. The engine has been detuned and makes 123bhp and 112Nm of torque. Mid-range performance has been given emphasis, and peak torque is available halfway through the rev range. A 6-speed transmission carries power to the rear wheel, and the Amazonas’ performance figures are comparable to its rivals. Once fully loaded, the Amazonas tips the scale at 240 kilos, which is again similar to the competition. 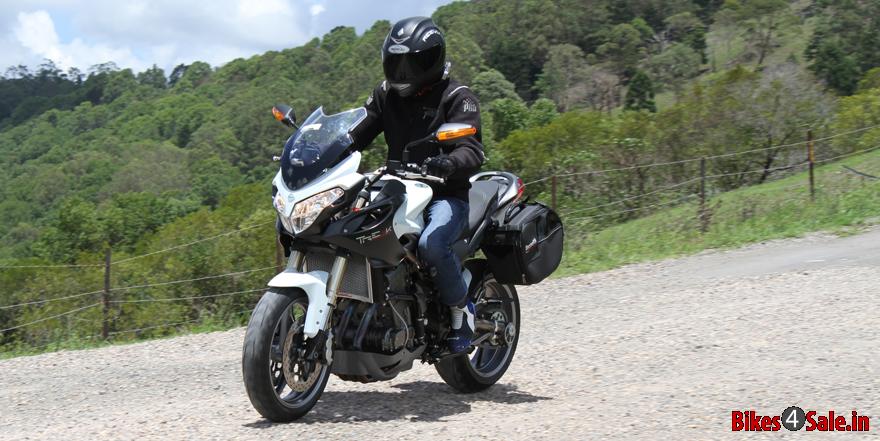 What sets the bike apart is the lack of electronic aid. The usual traction control, power modes and, for that matter, even ABS have been given the skip. This means you save a precious few minutes and get straight to the riding bit. If you do want to manipulate power going to the rear wheel, there’s a power control button that can be switched on the fly. In normal mode it smoothens acceleration, while power mode sharpens throttle response. It does not affect the power rating in anyway, but blunting the throttle helps while trail riding. The engine is noisy and sounds unrefined, but is unapologetic about it. Power is hammered down to the asphalt from the word go. The Amazonas feels untamed unlike a lot of modern day bikes, which, thanks to their electronic aids, tend to deliver a watered-down riding experience. With the Trek you have to manage all that power coming from the in-line triple without the help of electronic nannies. This adds a lot more fun to the riding experience. But we did long for a slipper clutch that would have aided aggressive downshifting. 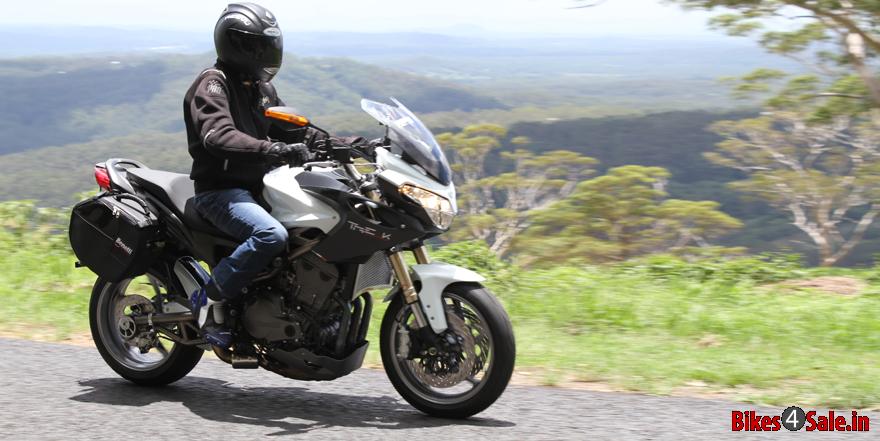 Taking a series of bends is never a problem, but you would find the turning radius to be a bit wide. This can be tricky if you are on a narrow road in the city, or trail-riding. Speaking of trails, the Amazonas does feel more at home off the road than most Japanese bikes we have ridden in this segment. The Metzeler Tourance on-off road tyres provide ample grip on dirt. Though it is not a complete off-roader, the extra traction is helpful while riding on dusty trails or back roads. The bike is easy to ride around in traffic, too. The narrow seat means riders 5.7-ish can place their feet firmly on the ground. This is especially helpful while managing the bike in stop-and-go traffic. On the flip side the shape of the saddle means you don’t have enough room to move around, which can be discomforting on long rides. To tackle diverse environments, the bike is equipped with adjustable 48mm upside down forks up front, while the Sachs monoshock at the rear can be adjusted for rebound and preload with the twist of a dial. Though we put the rear suspension at its softest setting, the ride was still a bit bumpy on slow speeds. At higher speeds the Amazonas moves over potholes with tank-like composure. 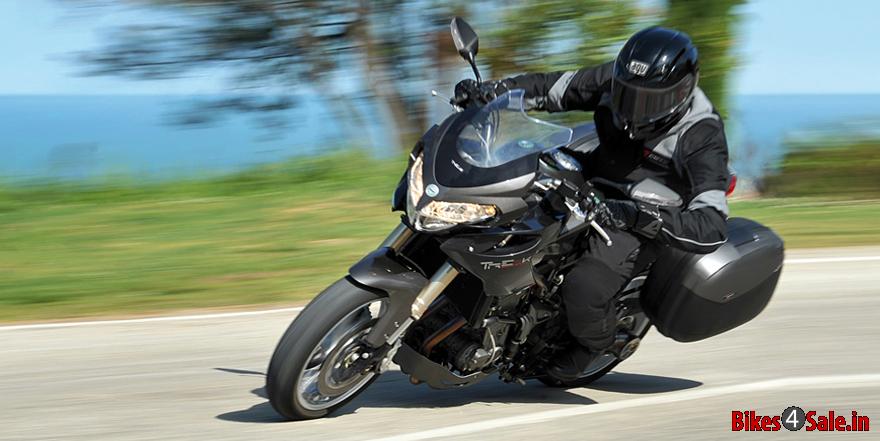 For something that has so much brute force, we did find the brakes to be a bit lethargic. The Brembo 320mm dual disc upfront and the 240mm disc at the rear lack the urgency that you would expect from a bike that has so much power. While it stops in time, we just wish the brakes had some more feel. To be fair to the Amazonas’ braking capability, the lack of an ABS means the progressive braking helps the bike stop better off-road. The Trek Amazonas 1130 is for people who like their riding experience to be unobstructed by electronic interference, and like it raw. And, the 1130’s raw power can get very addictive once you get used to it. 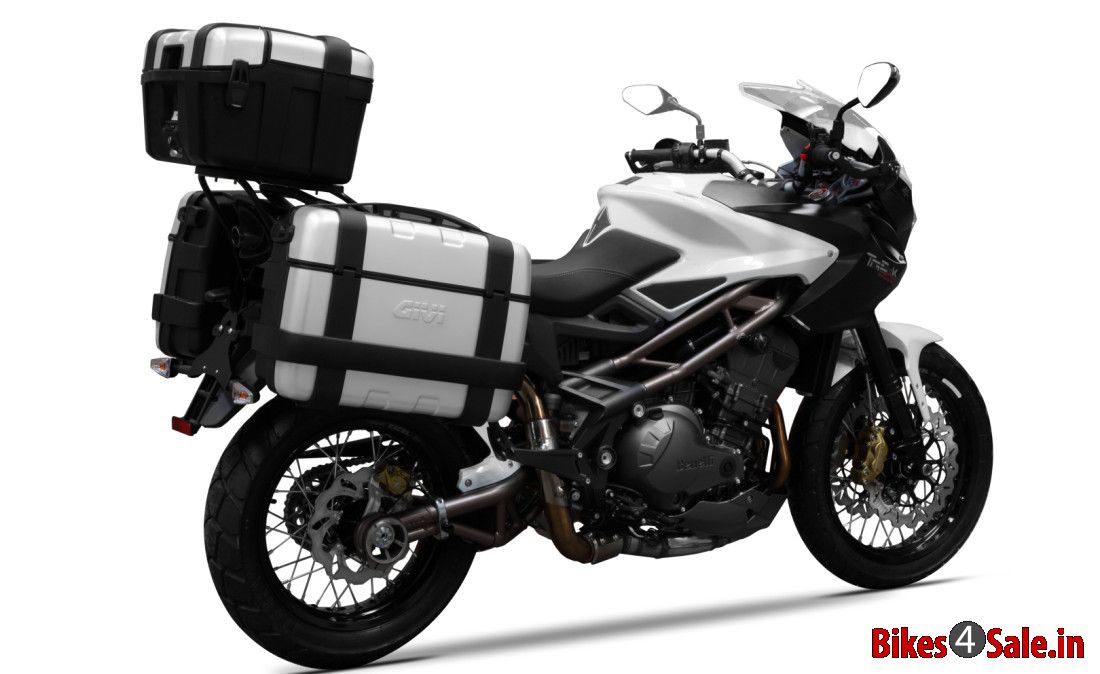 Overall, it’s an adventure tourer without electronic aids, but lots of nice, brute power. The price ₹13 Lakhs that it demands might be shocking, considering what you get with and on the bike. 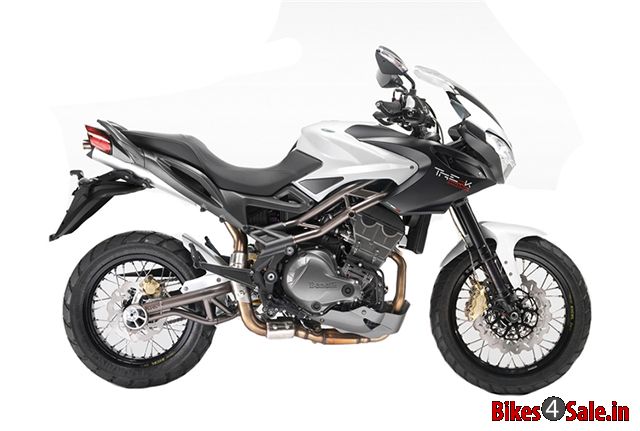