Second generation of the flagship SUV gets leaner, quicker and more efficient.

The official unveiling of the all-new Q7 has finally happened. Audi has launched the new avatar of its popular oversized SUV for a starting price of ₹72 Lakhs, ex-showroom, Delhi for the base Premium Plus, going up to ₹77.5 Lakhs for the fully-loaded Technology trim. Interestingly, the outgoing Q7's top-end model was priced at ₹80 Lakhs. This pits it straight against the recently-launched Volvo XC90 and undercuts any of the other full-size 7-seater luxury SUVs.

First shown at the Detorit Motor Show early this year, the new Q7’s design is a total departure from the model it replaces. Unlike the bulky, curvy older version, designers have emphasized on giving it a leaner, more athletic persona. For example, the grille is more upright and the headlamp more rectangular. Even the wheel arches have a flatter finish than the earlier model. 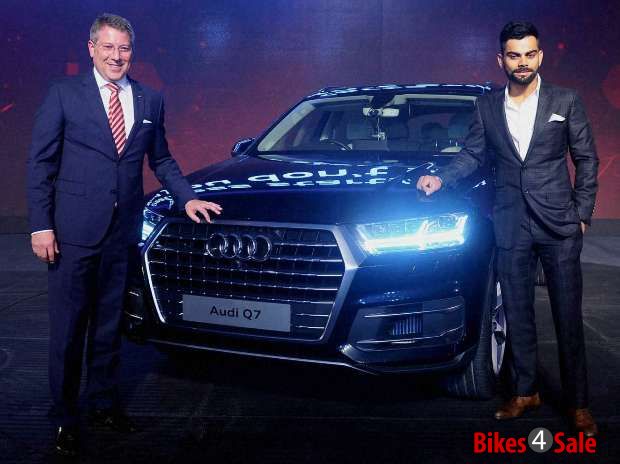 It is tough to say whether the new model has grown or shrunk. The overall length is more but wheelbase has reduced. It is less wider now with the mirrors folded, but is marginally taller. For the passengers though, there is little to worry because both head and shoulder room have gone up. Boot stays a decent 295 litres but can swallow up to 770 litres of cargo if the third row seats are folded. By the way, they fold right into the floor to give a fully-flat loading bay. The spare tyre (space-saver), a must-have as per Indian regulations, is now fixed vertically on the right side. Unlike Merc, Audi isn’t laying out the space saver to allow using the boot space more efficiently. If you have seven passengers, you will have to leave behind the spare wheel in the garage.

While the Q7 started its India innings a few years ago with the option of a petrol and two diesel engines, more recently it was only selling the latter. Not surprisingly, it is sticking to the diesel for the new Q7. Only the 3.0-litre TDI is being offered that’s the 45TDI as per the new engine naming nomenclature. That’s 246hp at the top end. Enough to take the mighty SUV to a max speed of around 234km. Audi engineers have done a spectacular job with the keeping the weight in check. For the record, at just over 2 tonnes, this is 325kg lighter than the older model. All that weight savings, plus 600Nm of tarmac-ripping torque gives the new Q7 a 0-100km time of under 7 seconds.

The engine is mated to an 8-speed Tiptronic gearbox, which may not be as engaging as Audi’s other dual-clutch boxes but helps in keeping the momentum with ease. More importantly, it also aids efficiency. Audi claims the new car is almost 27 per cent more fuel efficient. Our test figures put the fuel efficiency at 10.75kpl on the road, in our driving conditions. Not bad at all. For those with an eye on the environment, Audi puts the reduction of emissions at around 22 per cent, too.

While the Audi Q7 found a reasonable fan following with Bollywood and other bigwigs due to its larger-than-life proportions, it remains to be seen how will they warm up to the new version. But there is no doubt that the new car looks leaner and more modern, albeit if a less intimidating but has more to offer in terms of features such as the brilliant Matrix LED headlamps, a virtual instrument cluster that can morph from a fully speedo/tacho to a navigation screen and Quattro permanent four-wheel drive among others. Also, it adds to the tally with a more spacious cabin and a generally more efficient machine in terms of power, performance and emission.
Written by Deryl Cherian.
Last updated on 14-12-2015. Published on 14-12-2015.