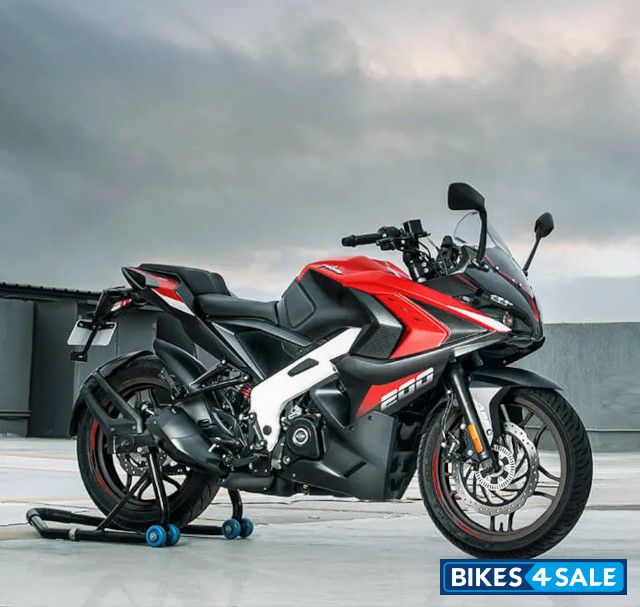 Rolling out from Bajaj's stable is the new Pulsar RS 200, offering stiff competition to its rivals. Sporting a 199.5cc engine, 6-speed gearbox, churning out 24.2 bhp of power and 18.6 Nm of torque, the Pulsar RS 200 has certainly upped the ante and set new heights in the segment. The Pulsar NS 200, its predecessor, was well received by the Indian audience and Bajaj has taken a step further with the RS200 and introduced drastic changes with the overall styling and the engine department. The top speed is 140km/h, 5km more than the NS200 and has optional ABS. Mileage is claimed to be at 54 km to the litre.

2017 Edition
Pulsar RS 200 is the first and only full faired sportsbike of Bajaj. The company has given the second and latest upgrade to this model by fitting the all new BS-IV compliant engine under the new skin. The new set of RS 200 came with a brand new skin. Bajaj calls it as their 2017 Laser Edged Collection. It is offered in two-sets of color formats such as Racing Blue and Graphite Black. Other than the BS-IV engine, it uses electronic fuel injection for enhanced fuel supply. This helps in improving the rated power up to 1 bhp. The engine gets a revised software map with updated Bosch ECU to control the combustion.

Book a Test Drive through Bikes4Sale and we will try to get you the best offer for Bajaj Pulsar RS 200. 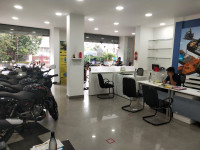 Nitrox Mono Suspension - Invincible balance with super comfort: Carve corners or race ahead, for hours at a stretch.

Liquid Cooling - Optimum engine performance at high temperatures: Ride On, No matter what. 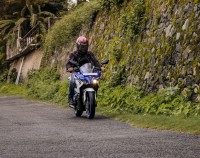 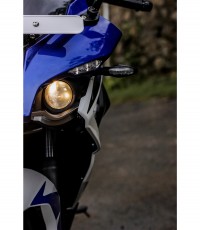 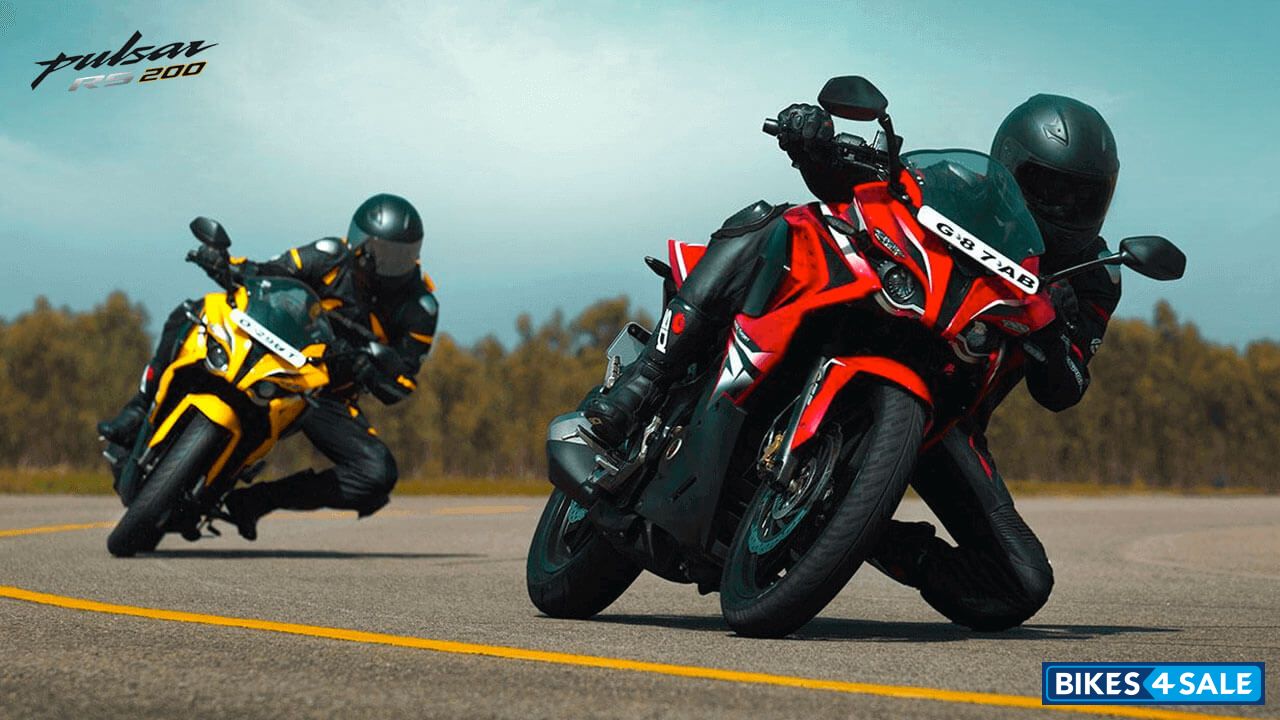 The Bajaj entered the fully fared motorcycle making with the Pulsar RS 200, the bike got launched in India back in March 2015, and now with the strict pollution norms set by the Indian government, and the company has given an upgrade to this model by fitting it with an all-new BS-IV compliant engine with new cosmetic and the Bajaj calls it 2017 Laser Edged Collection, where two-sets of new shades; Racing Blue and Graphite Black are also showcased. At first, look, what we notice in the RS 200 is the twin projector headlamps. This gives the RS 200 a mean sports bike look and stance. 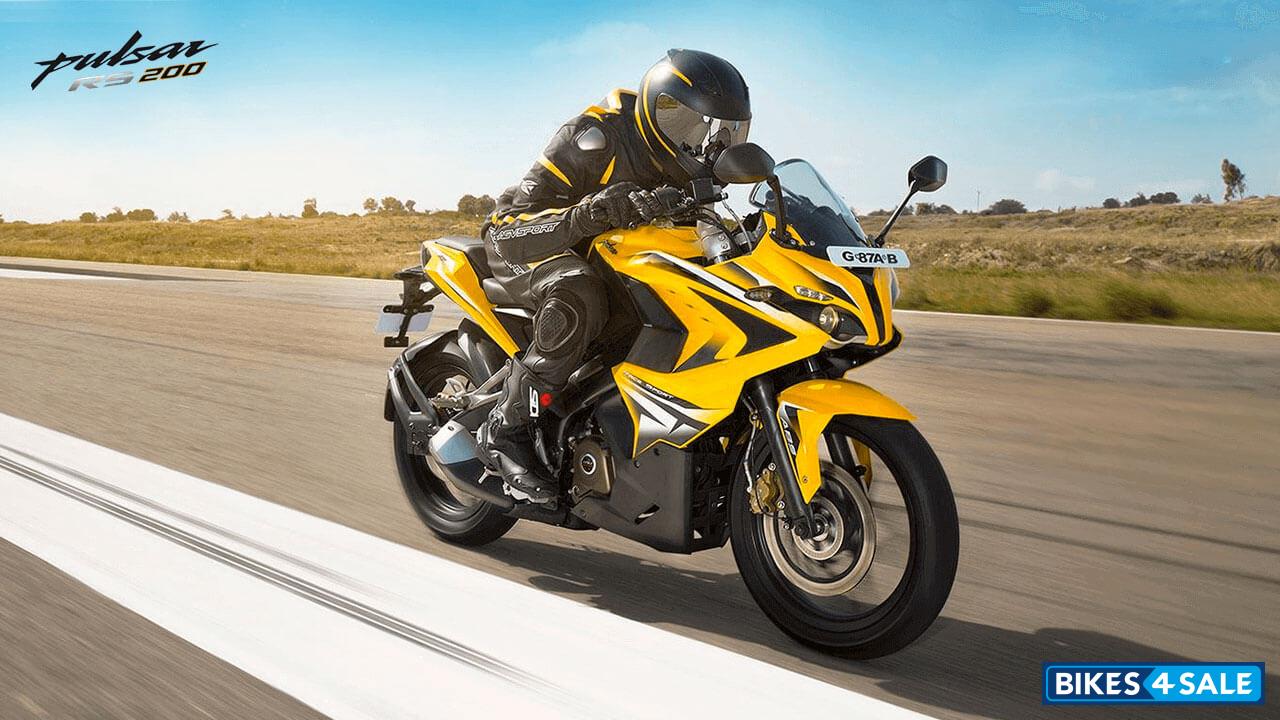 The engine gives out a surprising refined performance and gives the bike ultimate comfort and handing at all gears. The engine is well tuned to provide performance as well as mileage. The company claims a top speed of 140.8 kmph.

The Pulsar RS 200 uses a unique Pressed Steel Perimeter Beam Section Frame. The suspension setup of the bike is done with Telescopic suspension at the front with anti-friction bush and a Nitrox mono shock absorber with Canister at the rear. The suspension setup gives good feedback which gives total control while riding at higher speeds.

Bajaj has included a Single channel ABS, 300 dia disc at the front baking system, while the rear gets the 230 dia disc brakes. The braking system is good added with the ABS technology, but Bajaj should have given two-channel ABS system instead of on one in this powerful bike. The RS 200 has a kerb weight of 164kg. which is very lightweight when considering other rivals, and this light weightedness ensures good power to weight ratio and makes the bikes to accelerate to higher speeds with very less time.

The Pulsar RS 200 is a good race inspired motorcycle from Bajaj that could serve the Indian youths vert well. The RS 200 is built to be a very purposeful sportbike that has the ability to scale triple digits very easy as well as equally good for local commutes with good fuel efficiency also. The RS 200 can be used as a sports bike as well as a city bike depending on the preference of the users and can also be used for long rides due to the good mileage and power that comes with it.
Test drive reports, reviews and news
User Reviews of Pulsar RS 200. Write Your Review
Pulsar 200 rs is a wrost bike

I purchased on last year after 11 months since purchasing it start starting problem every time.

Visit service centre & they advise me purchased new battery than I purchased it. But problem not resolved. My battery cost gon waist.

Thanks
Mustaqeem
By Mustaqeem on 16-07-2018
There's too much distance between the handle and the console, so I feel it will be difficult to turn this bike. A friend of mine failed his driving test because he had attempted to clear it with his Pulsar RS 200. He should have also given the test on an M80 like others.
By Sunil Madhav on 19-07-2017
The gearbox crumbled down after 20000km. What's wrong with the Bajaj gearbox? They should develop a new gearbox for their entire range of bikes.
By Arif Muhammed on 19-07-2017
My Name is Rizwan Shafqat I am from pakistan I need a new bike Bajaj Pulsar RS200 My email ID is rizwanshafqat555@gmail.com contact me any delar
By Rizwan Shafqat on 17-02-2017
Because it very smart and then the top speed is 140
By Ranjith De Remo on 25-09-2016
My Pulsar RS 200 d legend gives 38 as it's original miliage. last week I took my bike from Bangalore to goa a road trip. it's totally 600kms from here. I reached within 5 hrs even after taking 40min brake here n der. it's really a legend. a best frnd for a real racer
By Vishal on 04-10-2015
I like both color with full specification red and yellow. Is better and good than karizma zmr bike. It is too much strong. Im exciting for new modification with new color . Bajaj pulsars bike too much good
By Kingraj on 15-09-2015
Can i get this bike direct from company bcoz I m getting different -2 prize plse tell me and u can contact to me by mail = paulsachinpaul@gmail.com
By Mr. Paul on 21-07-2015
If the rear seat would be at higher altitute like of CBR it would be more dashing and sexy and would beat any bike
By Baiju Karmata on 18-07-2015
When pulsar rs 200 will come in my state,patna or darbhanga please immedieatly lunch there.i am waiting !!
By Faiyaz Khan on 29-04-2015
I luv everything about it. but no confirmed mileage from bajaj up till now. I have booked it. am wait for its delivery now!!!!
By Munnu on 11-04-2015
I didn't knew about this,I was going to buy cbr but i saw it while browsing net.i am in love in first sight.
By Shivam Upadhyay on 29-03-2015
I AM WAITING MAY U GIVE REAL LUXURIOUS COMFORT AND DIFFERENT ATTRACTIVE STYLE ALSO PRICE CAN BE 121 ASSUMED
By Amit Soni Jamnagar on 22-03-2015
Price it below Rs. 1.25 lakh and it will beat each and every bike in the 180 to 225 cc motorcycle category.
By Vikas Sasidharan on 17-03-2015
Tell us why you love or hate Pulsar RS 200