Meet the next generation flagship motorcycle of Hero MotoCorp.

The wait is almost over and we will soon have the upgraded version of the much awaited and anticipated flagship motorcycle of Hero Motorcorp, the Karizma ZMR.

The story was out when Mr. Pawan Munjal, CEO and MD of Hero Motorcorp was snapped and uploaded along with the 2014 Karizma ZMR. Within no time, the news got virally seen in different blogs. Since it's just a leak, the specifications and stuffs related to the engine is still uncertain. And for that we have to be patient even further. 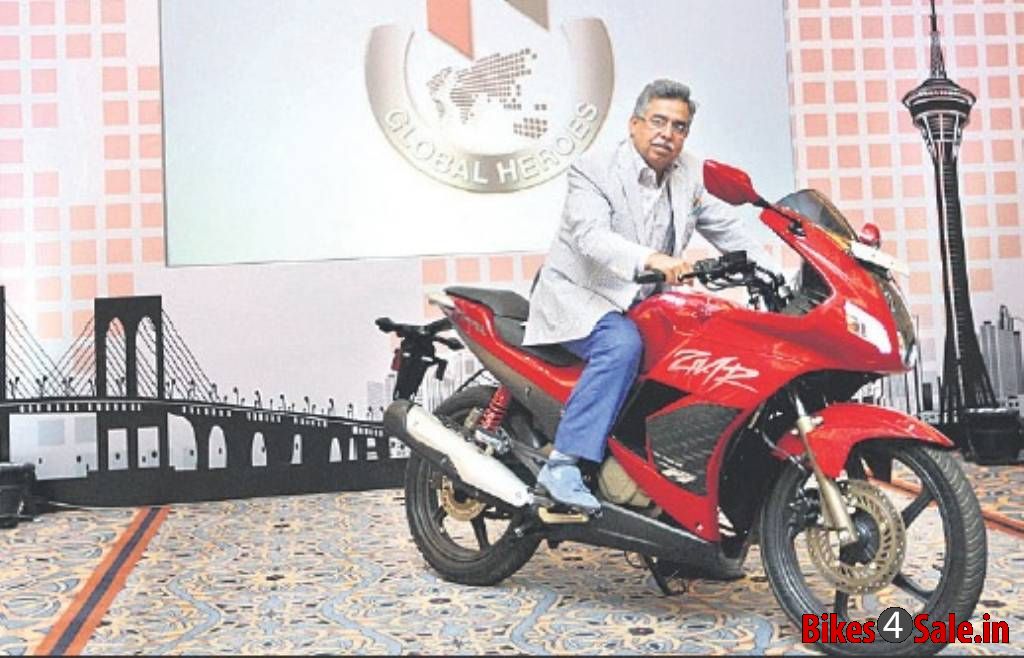 What is new in the 2014 Hero Karizma ZMR V2.0?
The 2014 Karizma ZMR is total updated machine rather than few alterations for the name sake. The only thing we are yet to be known is about its engine whether the heart gets any power or size changes or not. Whatever, this time it might not be the engine to look out but of course the new design!

Following are the major updates seen on 2014 Karizma ZMR
1. Headlight and Turn Indicators: As indicated, it's a total upgrade. The all new vertical dual projector headlamps certainly ensure the dashing presence of the bike on the road. One in the low beam and the other in a parabolic high beam setup enriches the appearance of the machine. 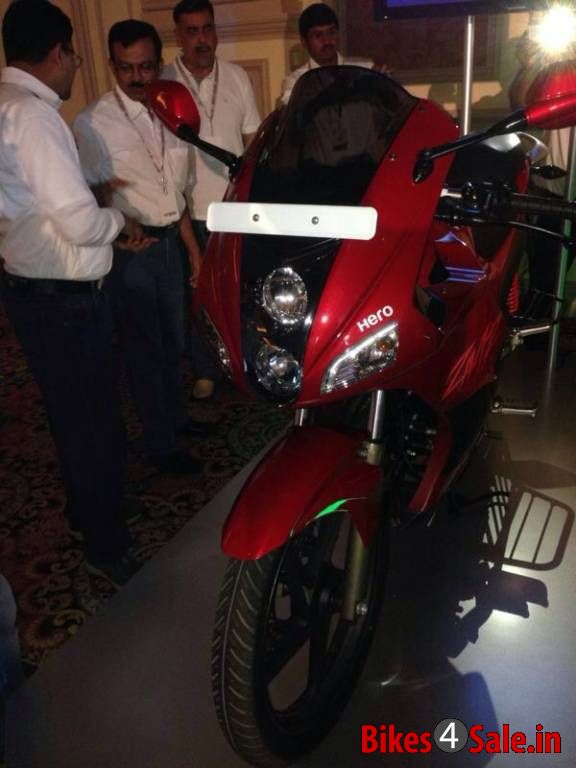 Meanwhile, the front turn indicators got promoted just beside the low beam light. That is the low beam projected is in between the two turn indicators. Well, the rear turn indicators have also given significant modifications. And more interestingly and attractively, day time running pilot headlamps are seen along with the turn indicators, which provides a lively effect to the arrival of the new Karizma ZMR.

2. Graphics and Paint Scheme:The shade structure is never the same. The new stuff looks whooping and brings the eyes of any motorcycle enthusiast to look on it at least for a couple of minutes.

3. Body Kits: Yup! There are significant changes with the kits, cowls and all. The new design is sportier and even takes cues from racing and high-end superbikes, especially the air-vents attached to the front fairings.

4. Seat: Now the machine gets a split-seat, which extremely suits the Karizma ZMR, which seems compulsory for this class motorcycles in the present generation. 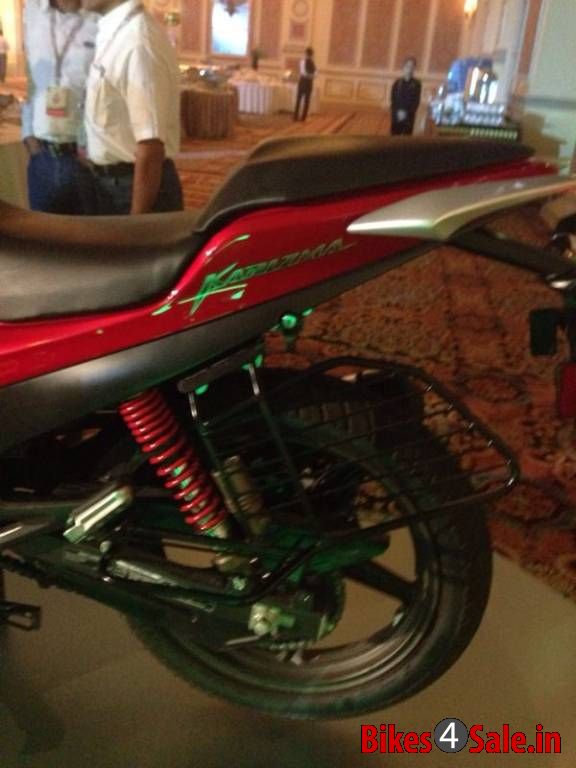 5. Exhaust: The current Karizma ZMR holds an outdated model silencer, which attracts no rider to ride it. Well, the new exhaust is different. It's impressive and will grab many buyers into Hero stores across the world.

6. Tail Light: The newly designed LED tail lamps are even more impressive than the previous. It certainly makes the Karizma ZMR deserved to have tons of visitors to Hero outlets. 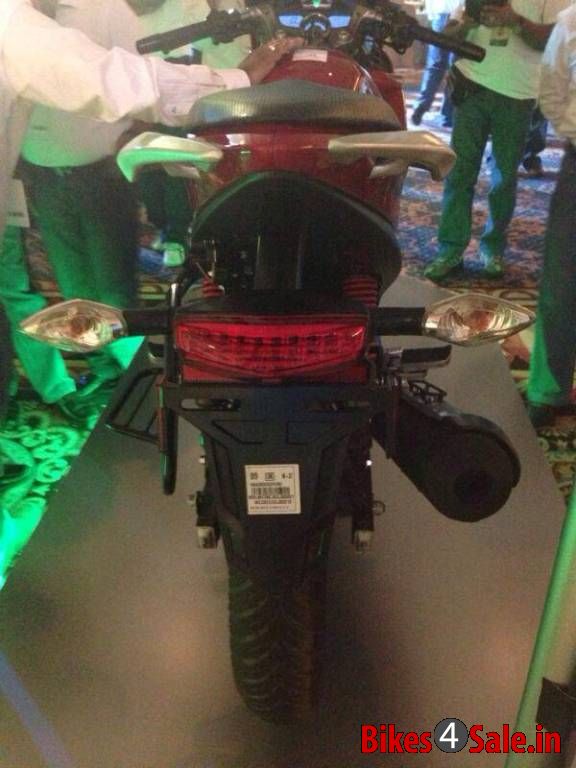 What are untouched in the all new Karizma ZMR V2.0?
As the machine gets major design upgrades, some highlighted parts are unchanged yet. And the stuffs are instrument console, wheels, and disc brakes.

What are yet to be known?
There is no official revelation apart from the firm. Rumours say that the all new Karizma ZMR is equipped with the engine developed by Hero's new partition, Erik Buell Racing (EBR). Bloggers also predict that the machine will have certain features powered by EBR. More importantly, no solid proofs are available to claim whether the new generation Karizma ZMR will have engine, power updates or not.

You have got enough money from HERO for sure, for such a waste article. This upgrade and design sucks big time, and even a kid of 5th class can draw better motorcycle design than this. Highly disappointing cheap work by HERO designers... You know, nakal mai bhi akal chahiye hoti hai... God save HERO...
By Viky on 01-10-2013
launching date plz
By Charan on 07-10-2013
Hi i am Rahul from Kanpur and i have ducuti and Suzuki GXR600 bike and i want to purchase new Karizma in 2013
By Rahul Arora on 07-10-2013
this is my reply to mr vicky on his comment SO Mr Vicky before you say any thing about any body i openly challange you to design a better bike then what has been in the pipeline & by the way reading at your article i can clearly make out that u don't know anything about Automobie engineering & designing So just keep your mouth shut ...............
By Nishant Paliwal on 09-10-2013
agree with mr nishant paliwal...vicky is an idiot...
By Jack Mack Hack on 02-11-2013
hero want to rethink about head lamp and shock absorber‎.
By Akhil on 15-11-2013
Plz donot copy making atleast something new
Is se phele wali better thi
By Bond 007 on 15-05-2014
copiey of 220F but it takes 220F omit is not so bad
By Kevalagravat on 06-07-2014
New zmr handle bar is shorter and inclined abit.....can we fit that in the old zmr???
By Neel on 08-08-2014
As a engine quality zmr is cool. But not of style. I think 220f is better looks then zmr.and also big difference also price .
By Freedom King on 24-11-2014