A total of 5 motorcycles have been sketched.

Glynn Kerr, the one of the finest motorcycle designers in the world, who has earned name in contriving machines for world class two-wheeler brands such as BMW, Triumph, Honda, Yamaha, Kawasaki, Harley-Davidson, Ducati, Kymco, and Fisher, sketches prototypes which have possibilities to come alive in the garage of Royal Enfield. The prediction is based on the Eicher-Polaris tie-up. Recently, there have been reports about the talks of Eicher-Polaris Industries collaboration. Royal Enfield is a wholly subsidiary group of Eicher Motors.

Polaris Industries is an American manufacturer of snowmobiles, ATV (All Terrain Vehicle), and neighborhood electric vehicles, which is also the parent group of ultra premium motorcycle brands-Victory Motorcycles and Indian Motorcycle. And Glynn foresees a lot with this and has sketched the possible prototypes, which he calls ' Royal Enfield Cannon'. 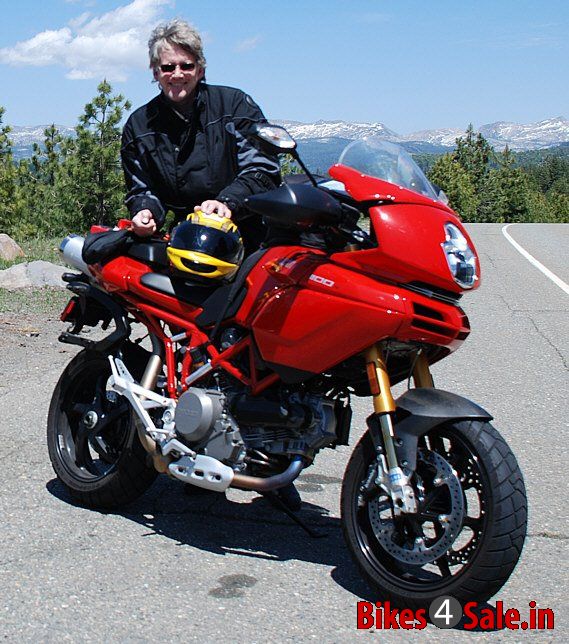 Royal Enfield is known for its traditional Bullets, which stays hard towards the heritage it is built up, designed, and manufactured. The Thunderbird series, and the upcoming Cafe Racer aka (also known as) Continental GT are only the exceptions, which give RE a refreshing look. Well, the artistic structures of Glynn are further forward to the present and the future generation. At the same time it slightly sledges away the all-time design of RE that is living through out ages and generations. It makes him to be showered by the unfavourable judgments of critics who still believe in the traditional beauty of RE. They argue that the sketches of Glynn are too sporty, which are a mixture of sportiness and classy. They find that these designs are awful and will kill the legendary brand name of the world's oldest motorcycle manufacturer which is in continuous production.

Thinking along with the critics we may think that we're right. It certainly affects the heritage of RE. But, when we stand along with Glynn we certainly think that he is absolutely right. Because, introduction of new and innovative machines will only hype the fame. It has also been framed that the machines drawn by Glynn carrry V-Twin engines, which will be first in RE motorcycles. If this is gonna happen, dear I tell you it is out of words.

Now lets checkout the motorcycles he has sketched from his artistry. 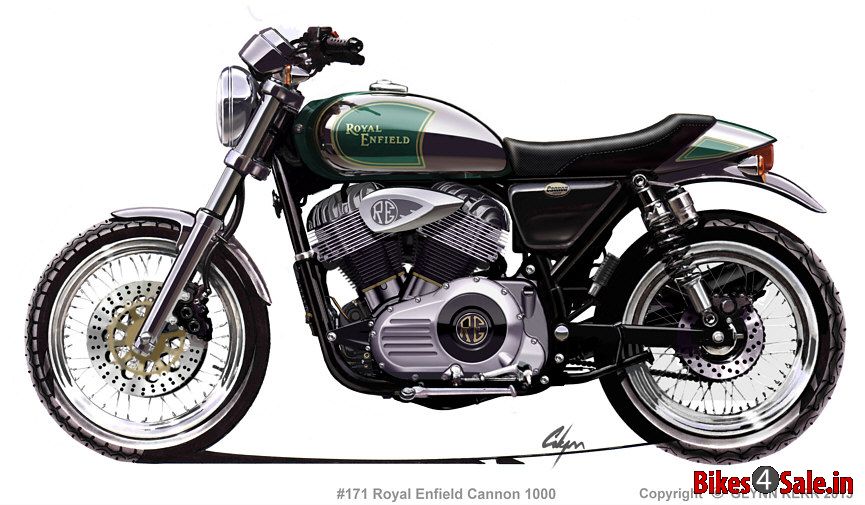 Comes with a V-Twin engine. Gets tagged under the Classics' label. The rear portion is its highlight. The fly mud-guard, and the tail lamp look cool. Its Royal Enfield tag on the gas tank is taken from Classic machines. Well, the RE branding on the V-Twin engine is simply awesome and unique. 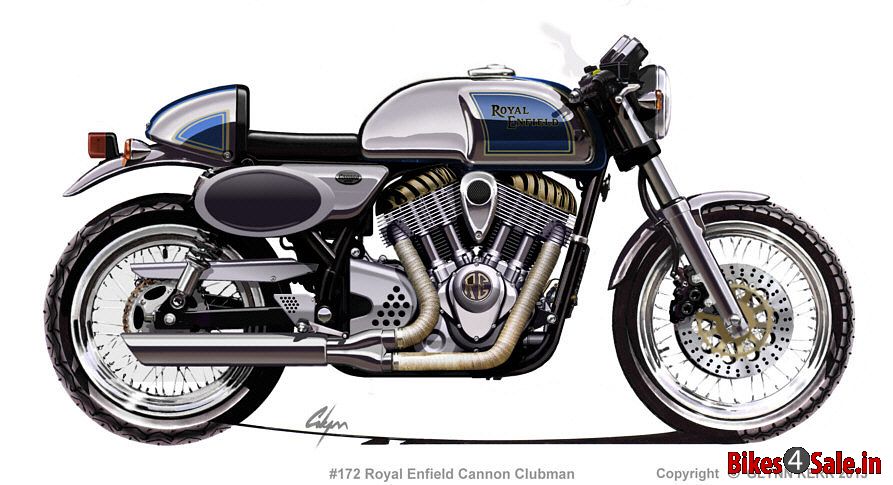 It's the same Cafe Racer in looks. But, it has got a V-Twin engine, and an extra box just at right side beneath the seat of the motorbike. 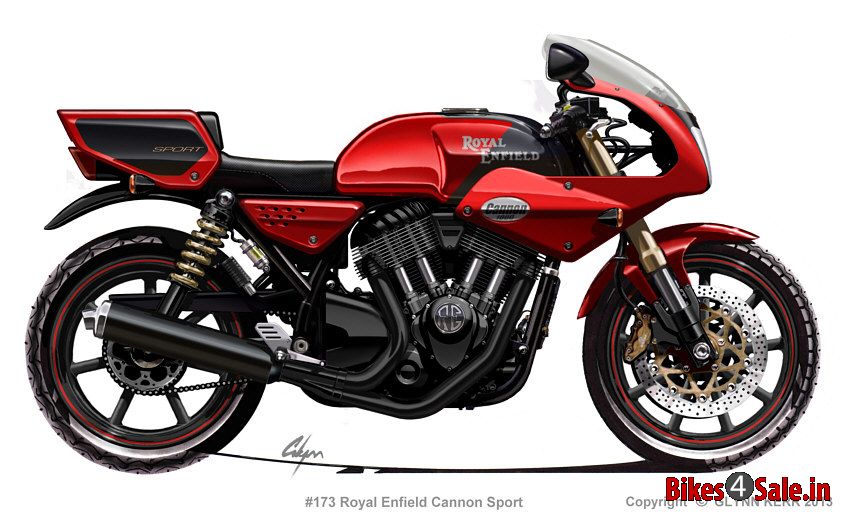 It looks like a mixed up of sports and Cafe Racer. The headlamp gets fairing. Its engine, and exhaust get black finish. A 7 spoke black alloy wheel is also seen at both sides. 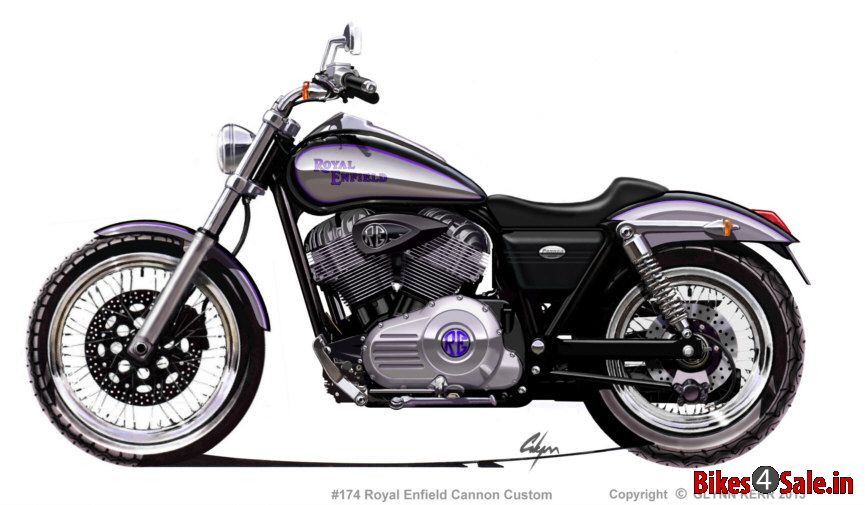 This machines reminds us the entry level machines of Harley Davidson such as the Superlow, and Iron 883. And it's in the cruiser class. 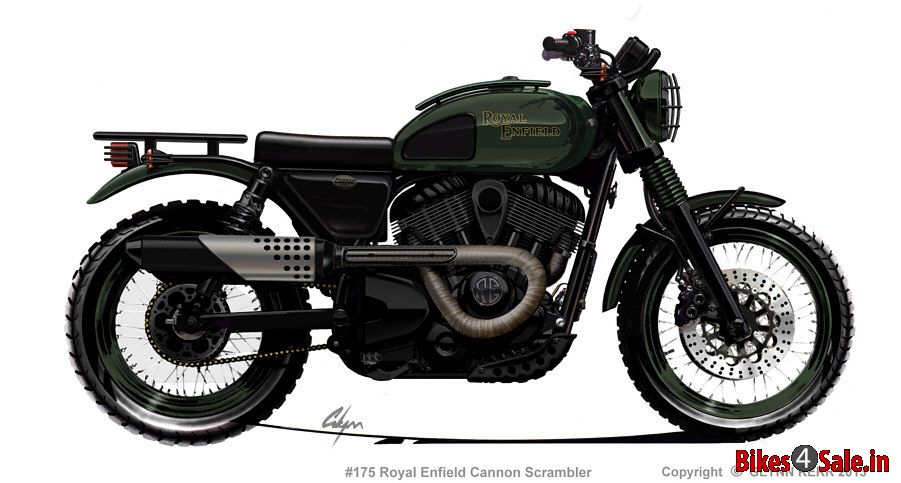 It carries a Triumph Scrambler cut. The exhaust, carrier, headlamp, tail lamp, and fuel tank covers, gripper tyres make the machine to look like a rear cannon in the war field.
Written by Jose Gonsalo Garshya.
Last updated on 14-08-2013. Published on 14-08-2013.

If you like these, you may be interested to see more of my work - check out "Glynn Kerr" under coroflot dot com, and "Glynn Kerr Motorcycle Design" on Facebook (sorry I can't give the links directly - this website won't allow it).
By Glynn Kerr on 08-12-2014
RE should go for these, if wanna really compete market, even now RE is just 5% of 2 wheeler share, but with these, it can take 10% share and can double it's sale, I am keen for Cannon and model similar to Superlow, and Iron 88. If they can get v-twin engines in black color then charm will be doubled
By Yogesh Puri on 12-02-2014
It will be a real treat for Royal Enfield fans. Will Indian Motorcycles be sold through Royal Enfield or will they be launched independently.
By Richard Rozario on 12-11-2013
I LOVE THIS BAIK OSHAM TO HOT TO SEXY BRING IT FAST IN INDIA BILLIONS OF BUYER IN INDIA IT'S CALLD A PERFECT BAIK.
By Mushtaque Ahmed on 01-09-2013
Lov the desine . Its all no royal enfield
By Hiren Kothari on 27-08-2013
Awesome machines. Really liked the design of Glynn. Hats of old man.
By Karan on 15-08-2013
I'm waiting for these bikes. C'mon RE engineers make things fast. We're really looking forward for newly designed motorcycles from you.
By Mark on 14-08-2013
Let the tie-up come true first. Then lets think about it.
By Paulson on 14-08-2013
It's a mind blowing work by Glynn Kerr. Harley Davidson watch out. I think the entire RE fans across the world are paying for these prototypes to come true.
By Aravind on 14-08-2013
Yeah definitely Mr. Shaji Chacko. And the V-Twin engine as shown in the figures will surely give a confusion to HD fanatics. Moreover, these prototypes are expected to be manufactured in RE plant. So the pricing will be very competitive to tempt the customers.
By Jose Gonsalo Garshya on 14-08-2013
RE Cannon 1000 & Cannon Custom look great compared to other bikes, If RE-Polaris launches this bike then Harley will certainly feel the heat because the only other bike besides RE {if launched in India} which challenge Harley openly is Victory Motorcycles. How good if this piece of art in paper becomes a reality, the other thing which concern me personally is pricing, it should not be overrated like Harley.
By Shaji Chacko on 14-08-2013