The Chief will be unveiled at the Sturgis Motorcycle Rally.

Indian Motorcycle, a wholly subsidiary venture of Polaris Industries is likely to foray into Indian and Chinese motorcycle market very soon. The news got disclosed when the company teased the all new 2014 Chief on their official website, it was stated that the Chief was coming soon. China is the other market along with India. If they could keep the words, it would be the Chief the first machine of Indian Motorcycle to hit Indian roads.

According to the sources, the much anticipated motorcycle of Indian, the 2014 Chief will be unveiled at the Sturgis Motorcycle Rally this August. This is the biggest moment of Indian since Polaris acquired the firm. Instead of normal advertisements, Indian Motorcycle is carrying out something unique to impress the maximum who care to ride cruising bi-wheelers. In the teaser video, the company describes the history of its and showcases somewhat of manufacturing procedures and body parts of the machine.

By introducing the 2014 Chief in very 2013, Indian aims only matter and that is to chop off the stake of Harley Davidson in the premium cruiser motorcycle market. So the expectation regarding the 2014 Chief is higher for both manufacturer and manics around the world.

The highlight of the 2014 Chief id its heart itself. The Chief is equipped with a newly developed Thunderstroke 111 cubic inches (1819cc) V-twin engine, which is built at the Osceola, Wisconsin at the Polaris Industries engine assembly plant. The all new 1819cc 49 degree V-Twin engine is powerful enough to ensure maximum torque of 155Nm. 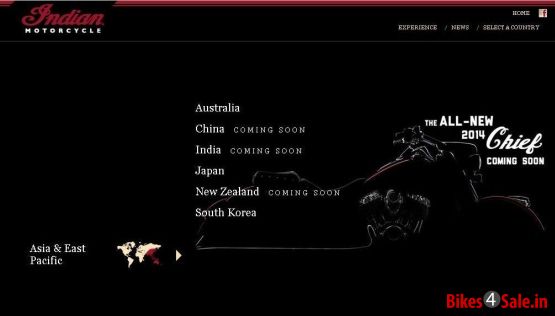 More interestingly, the bike starts at a whooping price range of $18,999. However, the firm hasn't disclosed much stuffs regarding both the machine and the dealerships in India ans China. Well, the parent firm of Indian Motorcycle, Polaris Industries has dealerships across India. So, this will certainly give advantage to Indian to link the whole country. It has been rumoured the the company plans to sell out motorcycles through Polaris stores as well.

"All of us at Indian Motorcycle are very proud to offer the 2014 Indian Chief at a starting price of $18,999. We set out to make the power and heritage of this beautiful new bike available at a price point that is competitive and more accessible to people who are looking for authenticity and choice in American motorcycles," said Steve Menneto, Vice President of Polaris Industries.
Written by Jose Gonsalo Garshya.
Last updated on 15-05-2013. Published on 15-05-2013.