The Three Wheeled Scooter Revolution On The Horizon

Wheels are considered to be one of the phenomenal inventions of mankind. From there onwards, it has taken the human lifestyle to a whole new dimension. The different forms of modern transportation systems that we see today have been evolved after the invention of wheels. The automobiles are even categorized by the number of wheels they have. Among which, the two, three and four-wheeled vehicles are very common and popular. In this article section, we will discuss the influence of three-wheeled vehicles in our transportation system. Especially the two front wheel vehicles.

Three wheelers are considered as one of the convenient and cheapest means of public transports in India. Moreover, the first purpose-built automobile was a three-wheeler, which was Benz Patent Motorwagen made in 1885. However, it was a two rear vehicle. It is the usual form of three-wheeled vehicle from which motorized and manual rickshaws were evolved. 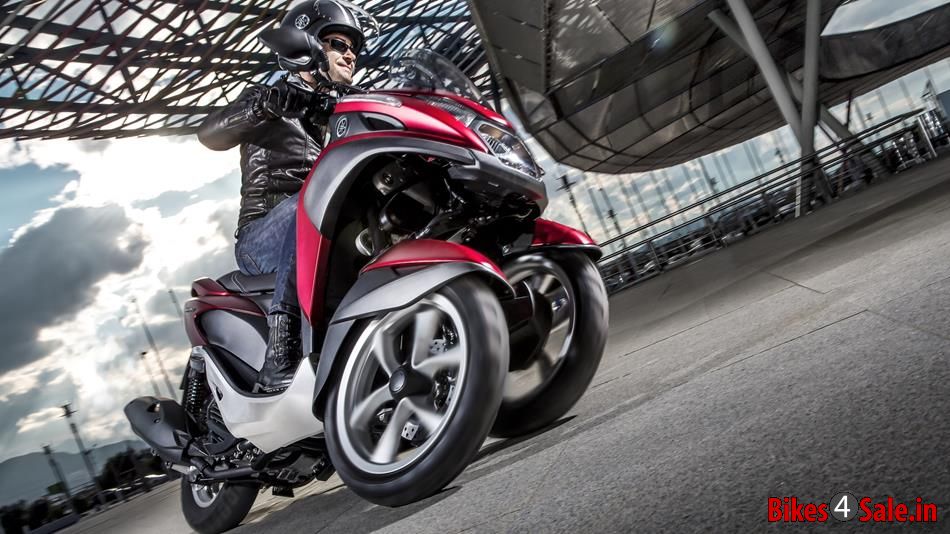 India is often referred to as a country with "Unity in Diversity". Therefore, one can find rickshaws buzzing in and around almost every streets and roads of India. To some extent, it is the cheapest form of public transportation. As India is a developing country, some people might feel it difficult to afford a car. This had elevated the preference of motorcycle in the country. Altogether, three-wheeled rickshaws and motorcycles are the two inevitable automobiles for the Indians.

The Front Two three-wheeled vehicles have a configuration of two wheels at the front and a single wheel at the back. The 'Voiturette' built by Léon Bollée Automobiles of France in 1895 is considered as the first front two-wheeled vehicle of its kind. Later, various forms of such vehicles were made featuring different types of engine. However, these were primarily based on four-wheeled vehicles, featuring the chassis, suspension and steering system similar to cars. Such front two vehicles have improved aerodynamics and it requires only a lightweight engine to drive the rear wheels.

Tilting three-wheeler is the scooter representation of the three-wheeled vehicle. This unique scooter was developed in order to undergo the motorcycle riding experience in three wheelers. Unlike other three-wheelers, their body or wheels can be tilted in the direction of the turn. Such tilted vehicles can corner safely even in a narrow track. 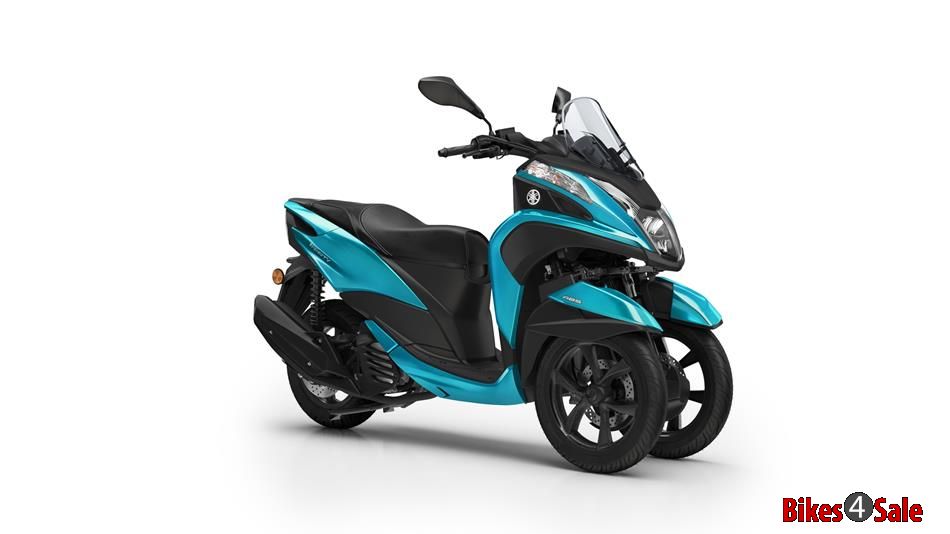 The tadpole configuration of these vehicles claims both stability and traction control. The front two wheels of the vehicle create wide round surface of the vehicle, while the rear wheel enables the vehicle to taper at the back. One of the safety features of this sort of vehicles is its stability in braking turns. However, they are also prone to overturning in normal speeds when compared to normal four-wheelers.

Yamaha Tricity is one of the advanced tilting three-wheeled scooters developed by joining hands with the race engineer Kazuhisa Takano. It was introduced in the year 2014, for the much lively Thailand market. The Yamaha Tricity targets people who prefer to experience the motorcycle rides with maximum safety of a four-wheeled car. The critical reception of Piaggio MP3 has encouraged the Yamaha to develop such an innovative scooter. After the launch, it scored positive reviews all around. Especially the stability, grip and braking of the Tricity were too good and even better than other basic motorcycles of the market. 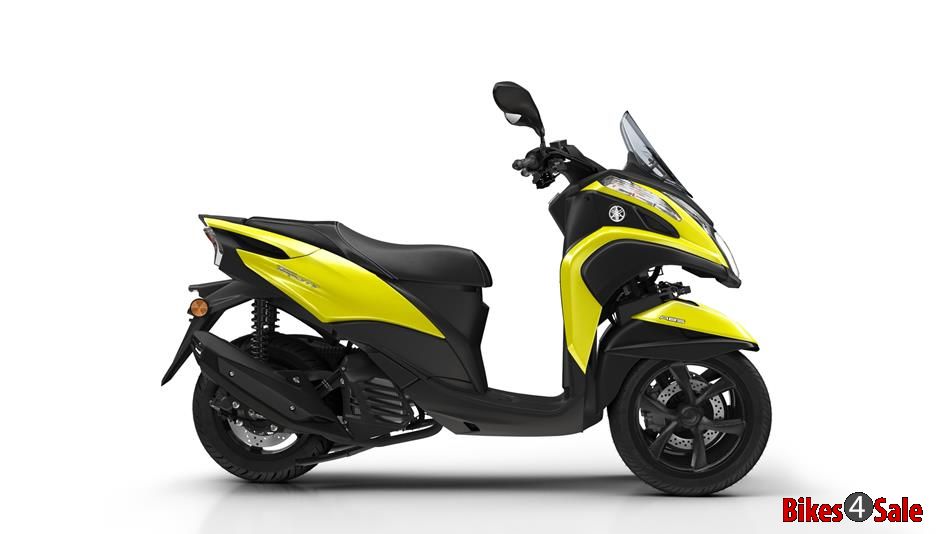 Tricity is powered by 125cc, single cylinder, liquid cooled engine delivering a maximum power of 12 bhp and peak torque of 11.7 Nm. This fuel injected engine uses V-Belt automatic transmission system. It gets a pair of 14-inch tyres at the front and 13-inch at the rear which is fitted with hydraulic 220 and 230 mm disc brakes at front and back respectively. Like the conventional automatic scooter, it features telescopic forks at the front and unit swing suspension at the rear. 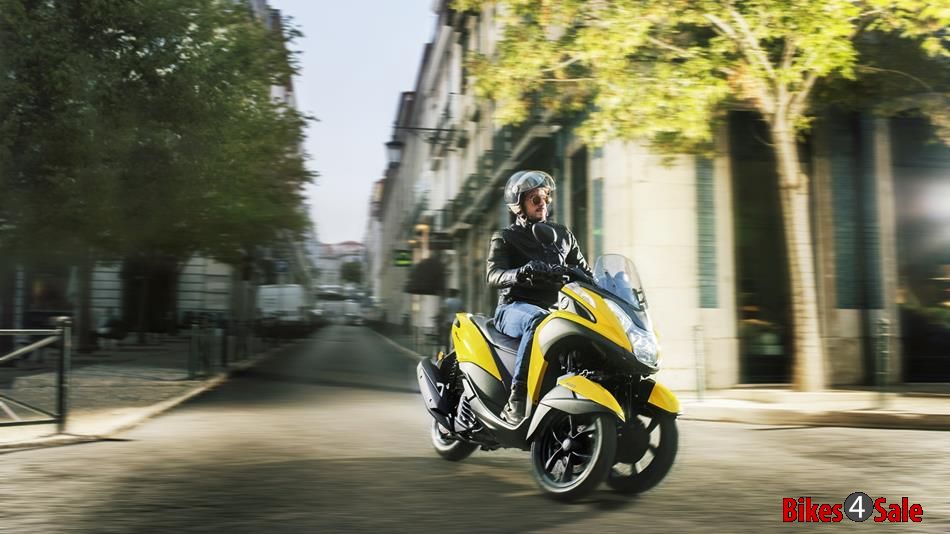 Basically, except for the man-powered and motorized rickshaws, other forms of three wheeled vehicles are not usually found on the Indian roads. Therefore, the front two-wheeled three wheelers like Yamaha Tricity and Piaggio MP3 might have a highly speculated market in the country. According to the recent studies, India has now become the World's largest two wheeler market and this particular fact has to be exploited by the makers of three wheelers. The wide acceptance of automatic scooters, Indian road conditions, dangerous drivers and unmatched terrains best suits three-wheeled vehicles in our country a lot.

As I mentioned earlier, India is a diversified country of land, people and culture. For the majority of millions, it is hard to own a car. Therefore two-wheelers have become their only resort for private transportation. Meanwhile, most of them do not prefer motorcycles for their own kids or ladies in India due to the safety concerns. The number of road accidents in India is the finest example for that. As a matter of safety concern, front two-wheeled three-wheelers could solve this problem to some extent.
Written by Arjun Thambi.
Last updated on 18-12-2017. Published on 28-06-2017.

Pls price bd tk three Wheel bike yamaha 1 pice bangladesh export possible pls mssg
By Md Kamal Uddin on 23-08-2020
hi, really nice scooter specially ladies like me who is short heighted and fear to ride, though i ride two wheeler but this would be more safer. Cross my finger so that the bike should launch as early as possible
By Jyoti Deb on 15-07-2020
We do not have any Transport Authority law in India for such 3 wheeled scooters as they will neither fall in as commercial 3 wheeler scooter nor as a 2 wheeler. That is why Yamaha and Piaggio are still waiting for such laws to be amended by India so that such vehicles can be officially registered. Can anyone please raise a PIL in court to push govt. for such amendment, so that this can solve many safety problems for those who feel 2 wheelers are risky......
By Manav Sharma on 31-05-2020
iwantthis bike9597877145
By Saravanan on 21-03-2020
I need 3 wheels
By Danish on 17-02-2020
I don't understand why the 2 wheel scooter/motor cycle manufacturers in India are not making 3 wheel scooters/motor cycles which are more safe and comfortably used by ladies/aged/handicapped persons. Is there any restriction on the part of Govt. of India in this regard. If so, I request our Govt. to consider this matter.
By N Sivan Pillai on 03-02-2020
Why are Brands not introducing 3-wheeled scooters in India? Like tricity 125 cc. Am requesting to all suzuki, tvs, hero, Honda, Bajaj pls go through it and help India women to raid a scooter a safely make it and launch as soon as possible in India at 2020. Because it creates a revolution. I will waiting who will start first...?
By Umesh on 23-12-2019
I have been looking for a 3 wheeled scooter for my dad who is 70years old. I don't know why none of these 2 wheeler manufacturers are seeing this as an opportunity to provide a safe , cheap and comfortable mode of transport for all especially elderly citizens and ladies...
By Srikanth on 10-12-2019
Why are Brands not introducing 3-wheeled scooters in India?
By Meeta Agarwal on 13-06-2019
I am a handi caped person .I am walking with artficial limb .I am useing TVS WEGO .is trycity suits me .tell me the pricek
By Ssubrahmanyam on 24-02-2019
i would like to know when this bike is launching in india.
By Dr . Ammajirao on 03-02-2019
I want 2 of these, if launched. I will sell my car and buy 1 for me and 1 for my wife :) .... I will ride this, just dont care if some one says its a ladies scooter. All I want is to go from 1 place to another, comfortably.
By Srini S on 30-11-2018
Can i import this scooter?
By Manoj on 17-09-2018
Hi dear Sir/madam,

I am a lady lawyer by profession.

I have a two wheeler ungeared scooter for local commutes. I used to commute by scooter for long distances previously. Now due to growing heavy traffic I feel riding 2wheeler is a risky Himalayan task. It could be seen that many ladies and gentlemen are risking their precious life and limb on everyday commutes. It may not only be due to rash and negligent driving but also because of other bigger vehicles like cars etc... Its obvious that two wheeler is vulnerable to falling on the ground which is not only due to losing balance out of lack of driving skills but also because of bad roads, oil spilled roads, sand and slush ridden roads, flooded road during rainy days.

It's well understood that 4wheeler I.e a car is safer than 2wheeler. But all people cannot afford to buy a car basically costing about rs.2Lakhs and odd where as the two wheeler costs between rs.35 to 55k. Moreover even assuming that they can afford the 2Lakh rupees or rs.1 to 1.5 for a used car, still there is a problem of parking space, inability manouvour in heavy traffic prone roads. Therefore inorder to avoid the unsafe 2wheeler riding and a costly and cumbersome car driving, an alternate way of transport being a 3 wheeler or 4 wheeler scooter with a roof could be designed, manufactured and sold commercially as it would certainly attract more and more customers especially women folk who mostly use 2wheeler to commute for work, picking up children from school and various other travelling tasks. They need not wear helmet. They can wear seat belt if required.

This alternate vehicle being a hybrid of car and scooter will come as a boon to car and twowheeler traffic prone Indian unsafe roads. Most people would graduate from two wheeler to 3 or 4 wheeled scooter

Kindly consider the aspect of people dying due to 2wheeler accidents and develop the hybrid scootcar for the welfare of middle class folks.

9025312142
By Shwethasri on 30-07-2018
When it's going to launch in India and what will be the price?
By Xyz on 14-07-2018
I am finding it difficult to ride my two wheeler as my parents saw it as very risky and force me to use the car every day. petrol rates are going high and commuting will be easy with a scooter like this. I hope these three wheeled scooters will solve the issue.
By Srishti Raj on 27-07-2017
No official statements from Yamaha or Piaggio. Let's wait for the 2018 Auto Expo.
By Arjun Thambi on 26-07-2017
The bike looks superb, and i guess this bikes will decrease many accidents in India, but when it will be launched?
By Uday Shankar on 20-07-2017
Let's not be sexist by saying this vehicle is for ladies. This scooter is for all those who value comfort and safety irrespective of gender. Also, I feel this is a good option for the elderly as they usually find it difficult to balance two-wheelers.
By Karnan Menon on 20-07-2017
Vikram, What you even mean by that? Accidents are increasing day by day and you are here swooning about your motorcycle community? Get a real life brother.
And about the Tricity, i think this bike will make the street more safer for women and children alike.
By Subhadra Varma on 03-07-2017
Well, the lady scooters are a disgrace to the motorcycle community and now this too.. where is this world going.
By Vikram on 03-07-2017
Nice bike this model ladys useful and safty
By Rafil on 01-07-2017
when Yamaha gonna launch this scooter.???
By Edwin Varghese on 29-06-2017
Is it going to launch in India? A perfect scooter for ladies and young boys. Fingers crossed for Tricity
By Mansoor Ali on 29-06-2017