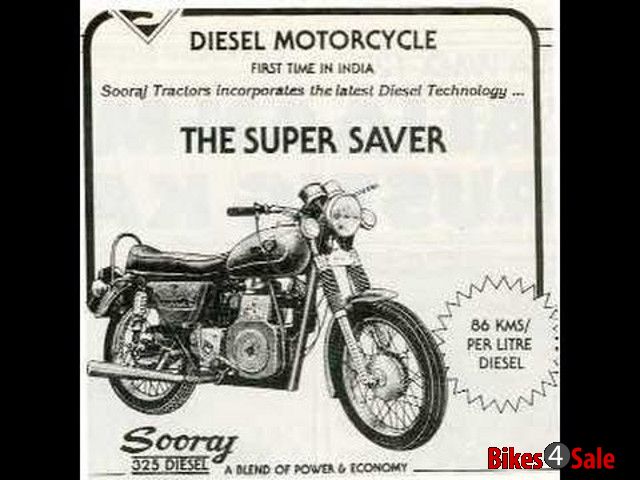 Sooraj Diesel is not in production now.

Sooraj Automobiles of Saharanpur was the only company to built and supply Diesel motorcycles in India, other than Royal Enfield. Like Enfield, they too used the very famous and reliable Greaves Lombardini Diesel engine from Italy. Lombardini used to built Diesel engines from 1980, when NATO urges to use Diesel governed automobiles in European union.

There existed a wrong thought that Sooraj Motorcycles are re-badged Royal Enfield Bullet with a Diesel engine. Many Enfield owners even replaced their gasoline power train from the motorcycle and replaced it with Greaves Lombardini engine. But Sooraj is entirely a different motorcycle but it does features the forks and wheels of an Enfield. The chassis on which engine is mounted looks completely different. Moreover, the Enfield Albion 4-speed gearbox used in this motorcycle is not mated along with the engine like the Royal Enfield models, rather it sits separately.

Sooraj's 325cc, Diesel engine is best known for its mouth watering mileage. It has an average fuel efficiency of over 86 kmpl and it do reaches 100kmpl in some models. In those times, it happens to be the cheapest mode of transportation (Diesel prices where very low). Cruising at 30 to 50 kmph is said to be most convenient and comfortable for this bike. Being a diesel engine, vibrations are common and high speed cruising often leads to tenderness.