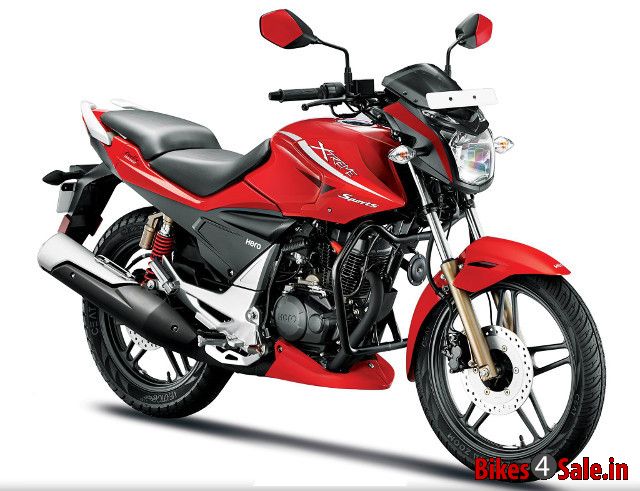 Xtreme Sports is the upgraded version of Hero Xtreme, which was launched back in 2008. The new Xtreme Sports and the Xtreme bears the DNA of the all time favorite, the Hero Honda CBZ. Like the first flagship model (CBZ), this one also targets young customers, looking for a stylish motorcycle for day to day commuting. This motorcycle was launched in the year 2014, just before the Indian Auto Expo 2014.

This 150cc class motorbike has many cosmetic and mechanical upgrades from its predecessor, the Xtreme. Many of the notable modifications are, the new revised headlamp unit with LED position lights, new instrument cluster, split seats, new handle bar, front and rear fenders and a redesigned cowl near the fuel tank and underneath the engine. It has a wider tubeless tyre for more grip and superior handling.

As we move to the mechanical section, Xtreme Sports is powered by the same 149.2cc engine, that powers the earlier version. It can delivers 15.2 bhp of maximum power @ 8500 rpm and a peak torque of 12.8 Nm @ 6500 rpm. Then this engine is mated to a 5-speed constant mesh manual gearbox, which is similar to the 150cc Hero bikes. Rear suspension has a 5 level adjustable twin-shock absorbers and a telescopic front suspension completes the new suspension system of this bike. The base model features front 240 mm disc brakes and a 130 mm rear drum brakes. An additional 220 mm rear disc brake is featured in higher versions.

Hero uses a new painting scheme for this new generation CBZ. The new colors with decals are featured in 5 different variants, which gave customers a wide range to choose from. Not only that, the graphics used in Xtreme Sports gives a street fighter looks to this motorcycle.

Book a Test Drive through Bikes4Sale and we will try to get you the best offer for Hero Xtreme Sports. 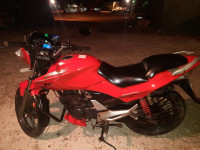 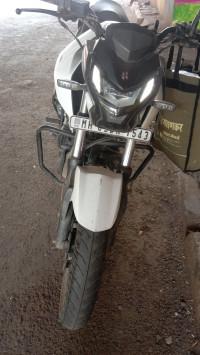 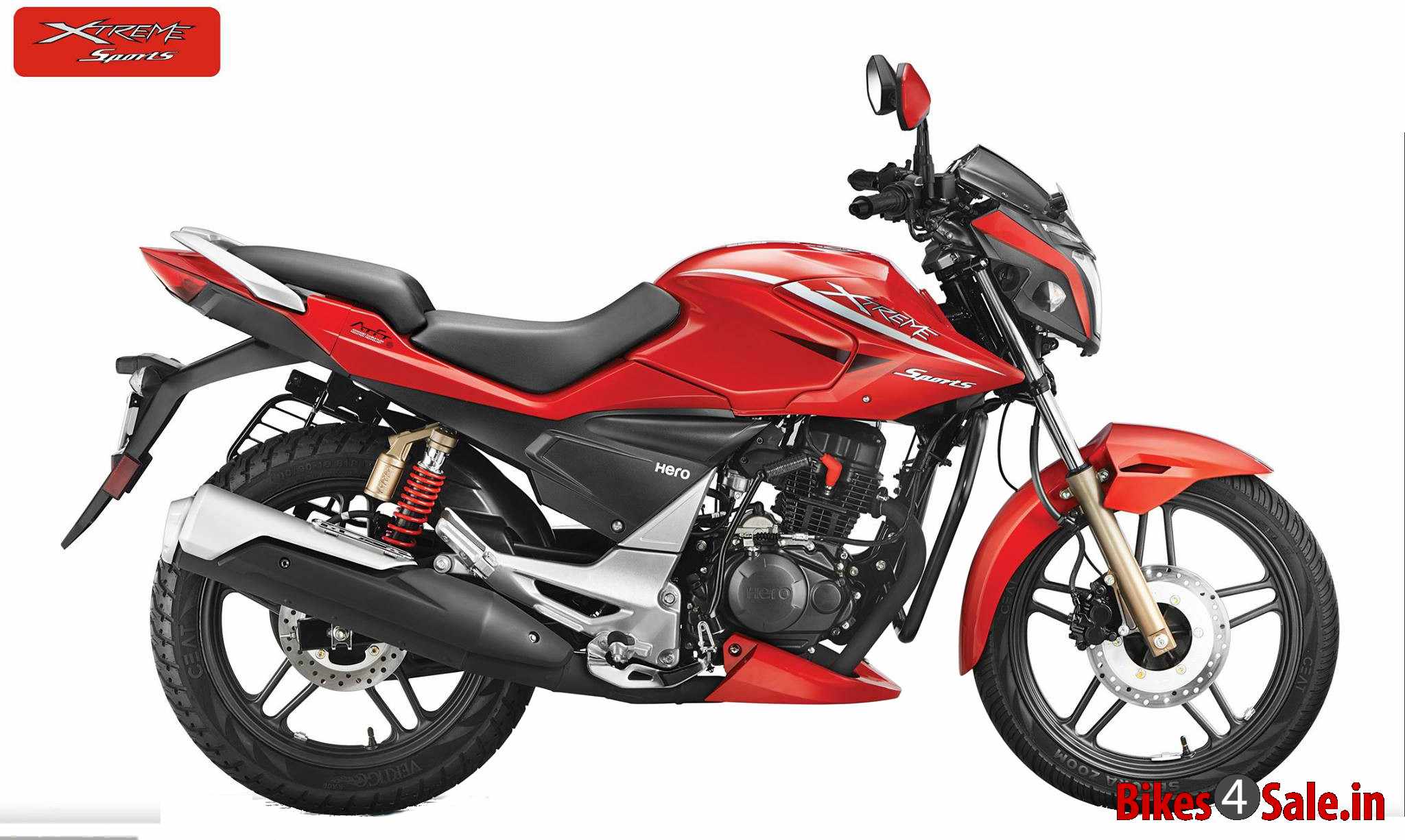 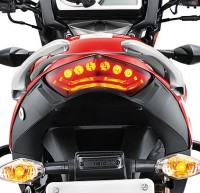 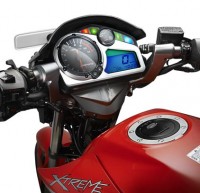 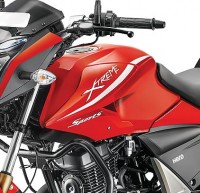 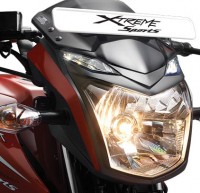 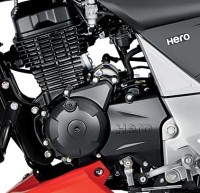 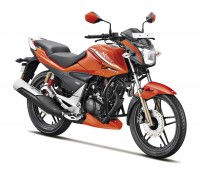 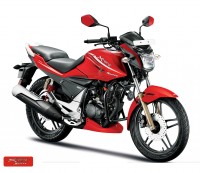 The 150cc class is the most popular and most remunerative class in Indian motorcycle industry. It is one particular segment which has players from all major brands. Hero has been one of the leading bike maker in this segment along with the likes of Honda, Bajaj and TVS. Hero Xtreme Sports is the latest and much refined version of the older CBZ Xtreme. Hero has imposed many mechanical and cosmetic updates to this machine in order to put out a real fight with other giants in the market.

The Engine Side
One of the desired feature of this bike is its powerful 150cc engine, which is more powerful than ever before. The 149.2cc, single cylinder, air-cooled engine delivers out a maximum power of 15.7 PS @ 8500 rpm and 13.5 Nm @ 7000 rpm, which is 1.5 PS more than Xtreme. So far, Xtreme Sports is the most powerful 150cc motorcycle available in the market. It can go from 0 to 60 kmph in 4.7 seconds. Hero uses advanced microprocessor ignition system for efficient performance and mileage. Hero engineers have worked a bit to improve the NVH levels of the Xtreme Sports. Engine is then mated with a 5-speed gearbox to transmit the power to rear wheels. 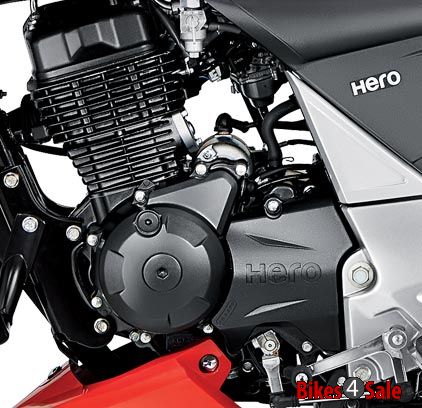 Design and Features
Hero Xtreme is one good looking 150cc bike with a masculine nature. After all, it is entirely a new bike but has a basic design structure from the Hero Xtreme, but this bike is cosmetically rich as compared to other bikes. Starting from the front, the wolf eyed headlamp profile steals away the first glance. 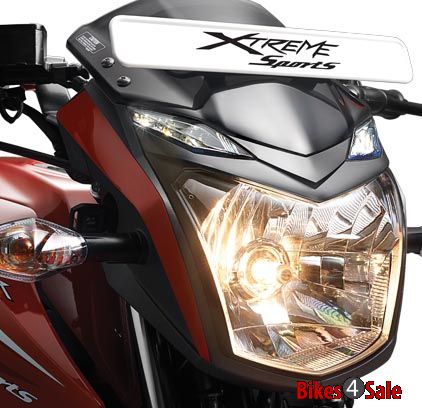 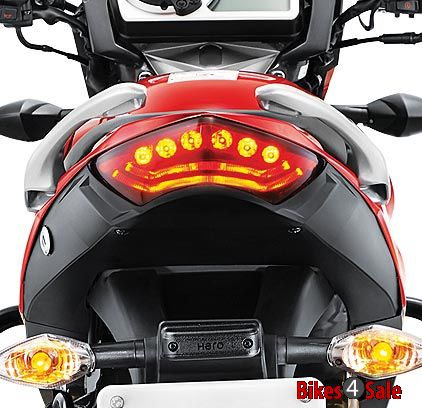 It has a LED pilot lamp that looks splendid along with the smoked windscreen. In the Xtreme Sports version fuel tank gets an extra shrouds to enhance its cosmetic appeal. Hero has used a newer graphics to give a street fighter looks to this motorcycle.

Other features includes split seats, rear grab rails, belly pan, exhaust muffler, wider handle bar and new stylish instrument cluster. A rugged sporty looking LED tail lamps are also featured in this model. The advanced instrument console displays features like service reminders and side stand indicators. Moreover, illuminated key hole and engine immobilizer too are present in this model. Sadly, this one doesn't have an engine kill switch and also an under seat mobile charging socket, which is featured in the elder sibling. The switch gear and hand grips of the bike is extremely good. 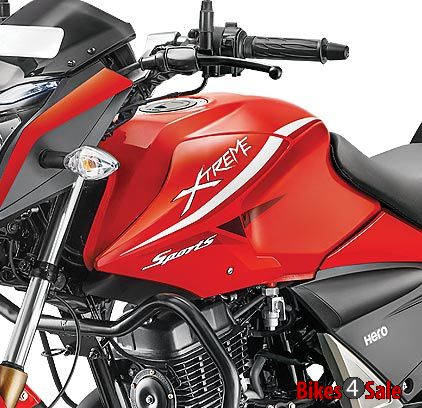 Suspension, Braking and Performance
This bike features telescopic hydraulic shock absorbers upfront and rectangular swing arm with 5 step adjustable gas reservoir suspension is used at the rear. It provides excellent ride quality as it absorbs impacts from bumps and potholes on the run. The stopping force of the bike relies on 240mm disc brake at the front and 130mm internally expanding shoe brake at the rear. An optional 220mm disc brake is also used at the rear. The diamond type frame endows the motorcycle with decent handling and dynamics. One of the main drawbacks on riding this vehicle is, it seems bit heavier and shedding down of weight should have improved the performance of the bike in streets and crowded lanes. 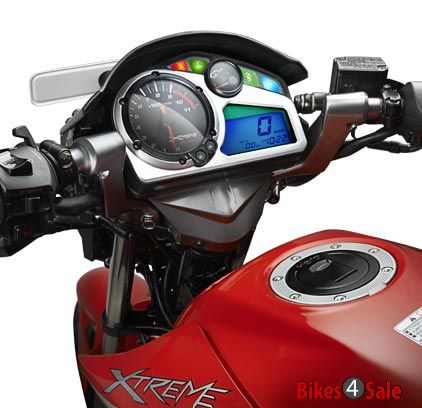 Verdict
Hero Xtreme Sports is one of the mot advanced model from the country's largest two-wheeler maker. The Xtreme Sports has the DNA of the famous and legendary Hero Honda CBZ. From the elder sibling Hero Xtreme, it has more power and refinement, but the kerb weight blocks the bike from exploring power gains. Styling of the bike is disappointing in some areas. The headlamp cluster along with LED pilot lamps has benefited the bike to enhance its looks, but it too sticks to their own odd looking trapezoidal format. One of the major drawback of high end Hero motorcycles are their design and styling principles. They hadn't evolved much in terms of designing their vehicle like othe brands. The Xtreme Sports has mash up of old and new, which has resulted in flawed ergonomics and cannot be tagged as a modern motorcycle. To be precise, its much improved and much refined Hero motorcycle, but it is not as good as its rivals in terms of styling and performance.
Test drive reports, reviews and news
User Reviews of Xtreme Sports. Write Your Review
This is very osm bike because it is very good looking bike and look is fantastic
By Rahul Verma on 24-02-2021
I love this bike. I am bought this bike in June 2015 and my bike milage is awesome bike ride is awesome handling superb top speed of my bike almost 120. I m loving it.
By Sandeep Kumar Rajput on 11-09-2020
Bike is smooth riding. But front look and key is not acceptable.some irritable sound from the front side.
By Sunil on 29-10-2016
I purchasing bike I like this bike
By Maruti Bhajantri on 25-10-2016
Hero xtreme sports rocking bike.but bike " start key option don't liked. " Bike key option senter very good
By Anil Meena on 07-02-2016
A'm Also Awaiting for Release. Hero CBZ Xtrem Sports bike Lunching for Globally thats why Late for Release. by the way Milage for CBZ Xtrem Sports 49 per KMPL(City) & Highway 57 KMPL Arrival Soon.
By A.santhosh Varma on 25-04-2015
I want this bike.
Iam waiting for this.
When launches in telangana?
Plz contact my nomber9948184701
By Mahesh on 08-03-2015
Why hero moto corp put the lock on the neck instead of top near the speedometer?
What are the pros & cons of this features?
By Amrish on 26-02-2015
Pls launce soon in assam coz m waiting 4 ds. m vry hpy 4 ds bike.its vry hndsm i like it.
But i need the coffe coloure. ply inf4m me plz
By Praban Kr. on 21-02-2015
PLEASE LAUNCH IN CHENNAIIIIIIIIIIIIIIIIIIIIIIIIIIIIIIIIIIIIIIIIIIIIIIIIIIIIIIIIIIIIIIIIIIIIIIIIIIIIIIIIIIIIIIIIIIIIIIIIIIIIIIIIIIIIIIIIIIIIIIIIIIIIIIIIIIIIIIIIIIIIIIIIIIIIIIIIIIIIIIIIIIIIIII
By Mmmm on 15-02-2015
i am waiting to buy the xtreme sports. When it will launching in Chennai.Out look is good but front i like previous xtreme.
By B.logesh on 15-02-2015
When will this shit launches??????? i tried all the available internet sites and called most of the dealers. no one has answer!!!@!
By Anand on 31-01-2015
Hey i want to purchase the all new hero xtreme sports so please when launched in gaya bihar please say.
By Shubham Singh on 17-01-2015
Its good bike but depends on the price it should be around 70000 otherwise there r many bikes like cbz which costs about 60000
By Pratham on 03-01-2015
Guys i'm also waiting for this bike from june but i lost patience. It will be released between Jan to march 2015.
By Prasad on 19-12-2014
I m exciting about this bike. I m not a user of any bike of hero family. But definately I will buy it for its engine output. In Bangladesh more than155cc bike is restricted. So its my best option & when it launch in Bangladesh.
By Khayrul Alam on 24-11-2014
Kya angle sail ayegi 2016 me.hero why u are sleeping? Wake up n let's hit this bike in market on 25 th Nov 2014
By Raj on 23-11-2014
when it will lunch in nepal . i have heard that it will launch in nepal first then after it will launch in india is it true.i have also heard that it will launch in december 2014 1st week. is it true
By Sushil on 19-11-2014
Sir please immediately ise launch kariye. .
Cz I waiting many time n my best n best bike hero xtreme series. .
Ho sake th aap is bike ka actual launching date bata dijiye
By Nimai Saha on 08-11-2014
hey guys those who r waiting for launch good news its on his way till november ending this bike will b in showrooms its hero strategy to capture its sales but it is getting worst n now the people r goin crazy. so plz launch the SHOW STOPPER soon its non other then THE XTREME SPORTS . PLzzzzzzzzzz
By Om on 20-10-2014
I love this bike. I'm waiting for launch in Durgapur, WB to own this bike. Please tell someone when this bike is going to launch.
By Sandip Chakraborty on 13-10-2014
When it is launched can any one know exactly?? dusshehra festival also gone but till now there is no announcement officially.
By Prasad on 10-10-2014
hero xtreme sports bike to bahut achha hai par thoda mera pasand se thoda sa agar age ka numbar pelait agar niche de ta to aur achha hota
By Pappu Jamshepur on 22-09-2014
hero xtreme sports is coool but compare to fz or fazer is it good or bad. can any bdy tl me plz?????
By Arnab Paul on 22-09-2014
Everything is excellent but only the front look is not like the previous xtreme. this is the only mistake. except this everthing is Fantabulous.
By Md Danish Ali on 14-09-2014
WAITING WAITING AND JUST WAITING :( :(
PLEASE LAUNCH BEFORE DASSERA, PLEASE
By Atul on 28-08-2014
this is Xtreme no limits in speed and design awesome same engine of CBZ with new technology good looking design
thank you hero for this bike
By Nazeeruddin on 20-08-2014
I love this bike. I'm waiting for launch in Bangalore to own this bike. Please tell someone when this bike is going to launch.
By Rajeev on 16-07-2014