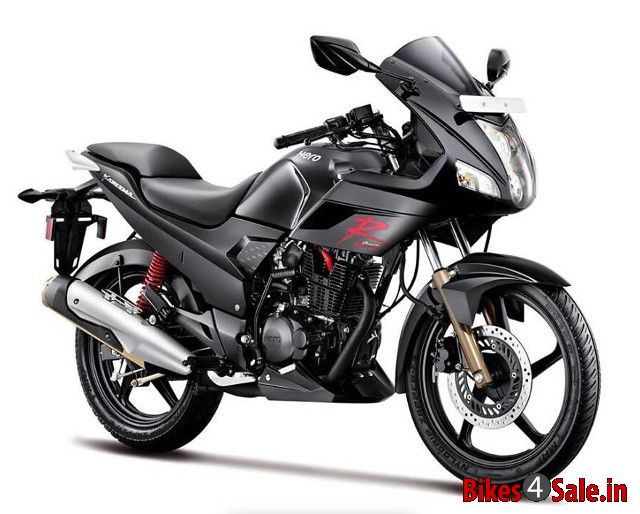 Launched in India in May 2003. Karizma R is not in production now. Discontinued in 2017.

Hero Honda Karizma R is the first generation Karizma bike. The bike was launched in May, 2003. The motorcycle was intentionally built to rival against the Pulsar brand. At first, the machine was named, the Karizma. Later, the name go modified to 'Karizma R' when the bike was slightly altered in 2007. In fact, the Karizma R is not in production now. The bike was gradually stopped and succeeded by the Karizma when Hero MotoCorp completely took in charge the firm. Later in October, 2013, Hero MotoCorp relaunched the Karizma R facelift replacing the old Karizma. The Karizma R is mated with a 223cc, 4 Stroke, Single Cylinder, Air Cooled engine. It generates a max power of 17 Bhp @ 7000 rpm and a max torque of 18.35 Nm @ 6000 rpm. It's coupled with a 5 speed gear transmission.

Hero has stopped the production of its motorcycle Karizma R and hence the given price is not relevant. If you want to check the price of second hand Karizma R, try our Bike Valuation Tool. 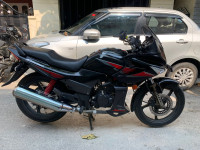 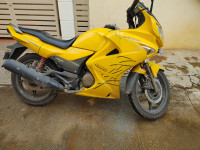 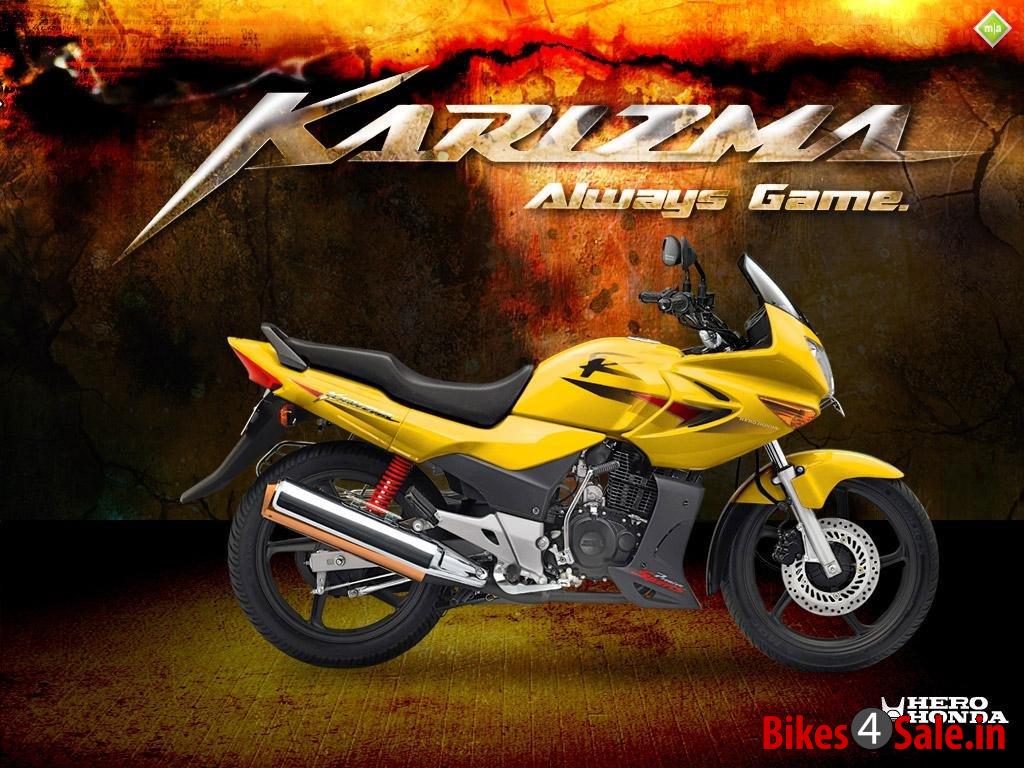 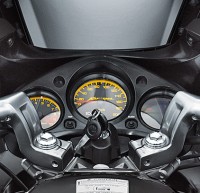 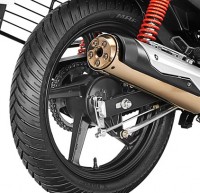 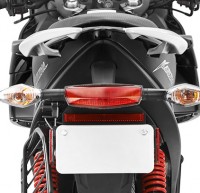 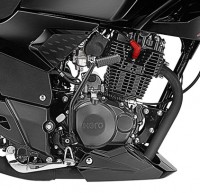 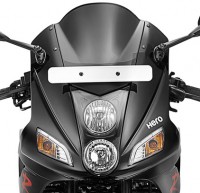 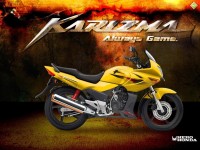 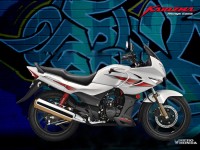 The World's leading two-wheeler manufacturer Hero, launched their flagship model Karizma in the year 2003. This 223cc, motorbike was born as joint effort of Hero and Honda. During that period it was the most powerful and torquiest bike with an appealing visual beauty and standout performance. And for the past 11 years, Hero continues to produce this bike without any refinements. The present ongoing Karizma was launched in the late 2013 as new Karizma R. 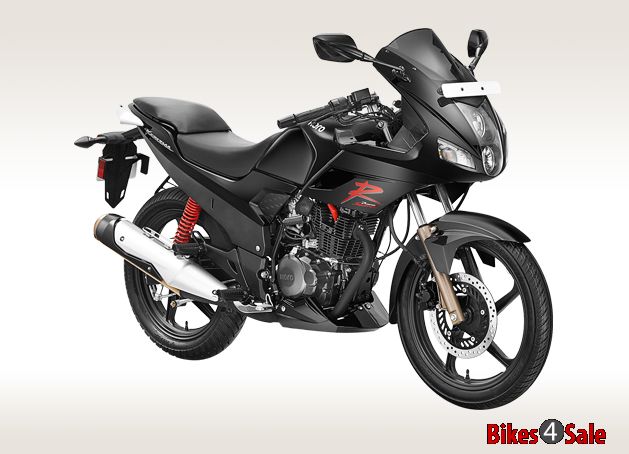 Design and Features
The present Karizma looks like a new bike from all the angles. From head to tail, everything about this bike has changed. Starting from the front, the new headlamp cluster features vertical dual dynamic lamps with LED position lamps. The turn indicators are also imposed within the headlamp casing. Windscreen size of the bike has been enlarged a bit and rear view mirrors are imposed on this single unit. Semi fairing covers the frontal portion of the fuel tank. Minimal design and graphics has been used on the fuel tank, which is pretty decent. From front to back, the whole body of the bike narrows towards the end tail and split grab rails completes the finishing touches of the bike. LED tail lamps and winkers are placed along a same piece. 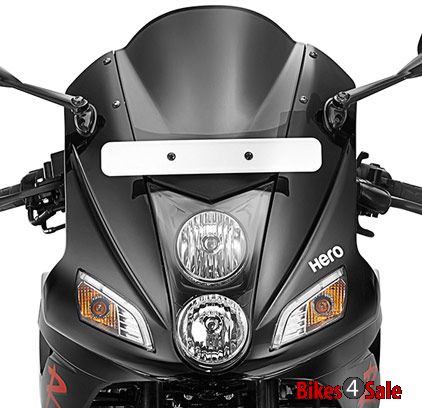 On coming to the instrument console, same three-pod cluster is again used in the second version of Karizma. In addition to the usual features like speedometer, tacho, tripmeter and fuel gauge, side stand indicator is also added. Despite the long term waiting for kill switch in Hero bikes, it continues here in this model as well. Meanwhile, a new set of clip-ons are used in grey colour. Hero used split seats for this Karizma, with a lower seat height for the rider to gives a sporty riding position with the new clip-on handlebar. No change for the exhaust kits, but the tyre size has been increased a bit. 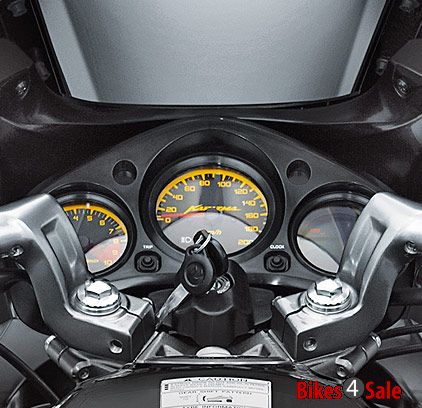 Engine
The engine of Karizma R remains to be the same. The very same 223cc, single cylinder, four stroke, air-cooled engine is used. The mill churns out a maximum power of 19.47 Ps @ 7500 rpm and a peak torque of 19.35 Nm @ 6000 rpm. Engine is mated with 5-speed constant mesh gearbox for power transmission to rear wheels. In standard conditions, the bike is capable of doing 126kmph of speed and it could goes upto 130kmph. 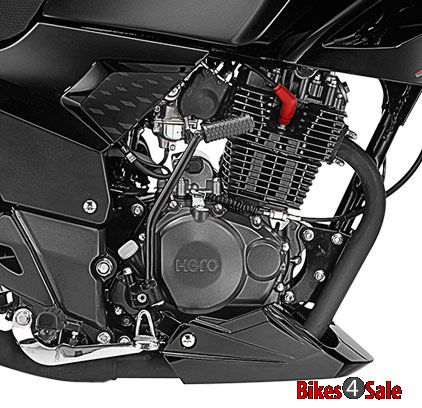 Hero is yet to make some refinements in the engine department, as the latest model have some minor problems related with the engine and noise. Exhaust is still producing those rattling sound like the older Karizma.

The whole bike is built on a diamond type tube frame chassis. Hero has been using this type of frame for most of their models. Suspension department of the bike consists of telescopic hydraulic shock absorbers at the front and swing arm with 5 step adjustable type hydraulic shock absorbers are used at the rear. Stopping force of the bike depends on 276mm front disc brake and 130mm conventional drum brakes. Hero should have feature disc brakes at both ends as it is a 225cc bike with fair amount of power and torque. 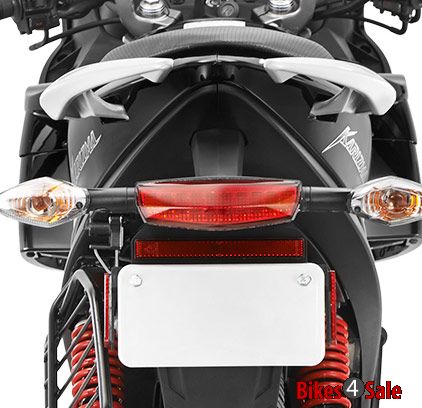 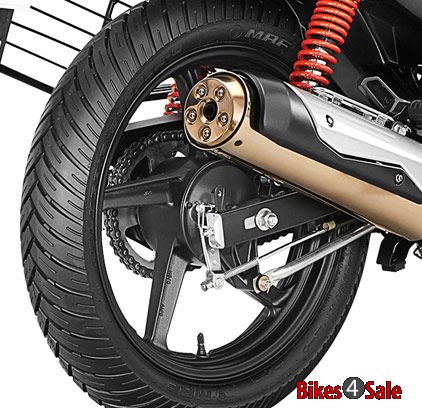 Conclusion
The first generation Karizma was said to be the best and most desired Hero bike. That particular model is still going a good business at the second hand sale market. The updated version lacks the crowd pulling factor from the older one, still it is bit powerful and torquier than previous model. Ever since Bajaj launched their Pulsar 220, Karizma is facing a tight competition as Pulsar tops this bike in Speed and design aspects. The new wider rear tyres and new improved seating position gives a sporty feels to the bike. But, Hero is yet to improve in designing a modern and advanced chassis for their bikes.
Test drive reports, reviews and news
User Reviews of Karizma R. Write Your Review
Old model karizmaR is soo nice and perfect for youth I love that bike plz start production of old type karizmaR bikes
By Sunkara Srinivas on 20-11-2020
Hi Hero motocrop.
Please launch old model karizma R. All are eagerly waiting for that bike.
New model karizma R was worst in design.
Please consider costumer suggestions and launch old karizma R.
By Sai on 15-04-2016
Plz relaunch the old model of karizma R lot of people wants this bike bt no body get so we kindly request to relaunch the bike
By Iliyas on 03-12-2015
I LYKE THE OLD MODEL THAN THE NEW.
I NEED TO BUY AN R. SO FRNDS PLS HLP ME TO FIND A GUD MAINTAINING R
By Eldho on 25-10-2015
The old karizma r model is best of in the world but new karizma r model is third class it's not good I don't like it. .so plzzz relaunched old karizma r.
By Rohan Patil on 28-08-2015
i have got new modle of karizma r, and after 3 service done it is giving me a milage of 30 km/h, which is very less, i was expecting it to be atleast 35kmpl. bt riding is good
By Mayank Chinchwadkar on 12-08-2015
awsome looks than old krizma r.
Excellent bike. Awesome handling. Top mileage upto 40kmpl. Stunning performance. Over its great. Hats off to hero motocorp.
By Rohan Ghode on 09-07-2015
Person sitting at the back faces problem to kneel down on d driver.????or can sit straight widout kneeling down on drivers back????
By Saif on 11-06-2015
It was NYC bike looking good condition the karizma R bike was juz looking for show nt rood grip nt stunts juz look.
By Thouseef Khan on 20-05-2015
Old model is better then new model continue old bt change the width of back tyre plzzz continue old model
By Raj on 27-03-2015
i owned karizma r 2014. superb bike. igot milage around 45[HW].39 at normal road. but back portion is not so gud[design].handling good.braking good.performence superb
By Ajith Mohan on 30-11-2014
I like old karizma R. 2011 model. New model is not gud .req.you keep same model if u wanna change the comfort zone. like suspension, milage ect. pls
By Dipak Pune on 22-11-2014
it is value for money bike with less maintanence compared to bajaj pulsars and good comfort and also having mileage betn 35-40
By Smartutkarsh on 09-10-2014
when it was hero-honda it was the heart of indians but now worst. i think hero don't have a brilliant engineers that's why thye are launch bad models. hero it is a global era please don't think to become indian bike. go beyond the world company.
By Rounak on 05-10-2014
I brought dis bike month & i completed 1300kms. Im getting 37km/lit. Bike has some vibrations in da front section. Rear braking is not good. Sitting postion was nice.
By Surya on 20-09-2014
Hi BHARAT, hero karizma is not polished bike, pulsar all bikes are shading color well after one year, and engine also if u want to sell after 1 year it costs 20 to 26000. other than this pusars all brands are good
By Suresh on 06-09-2014
What is this,u r showing both the models on website,which is avalable now,i think recent model is good compare to this new model.
By Hari Kumar on 29-08-2014
what is this? ,look like polish bike,
vibration, tyre looks funny, making big bikes but not change tyre size. exahuast looks old type. better go for pulsar180.
By Bharat on 26-08-2014
Excellent bike. Awesome handling. Top mileage upto 40kmpl. Stunning performance. Over its great. Hats off to hero motocorp.
By Brayan on 21-07-2014
I have bought this bicke 4 days back . it was soo amazing riding new kaizma r . and minus is back it look not much aggressive . mileage wise it is better . before 1 service I got 38 kilometers . ithink it is better
By Bhanu on 26-06-2014
Karizma R look was awesome compare to previous version. But i want to know exact value of karizma R mileage /lit ????????
plz tell me guyzz :|
By Naveen Kumar on 22-06-2014