If you would ask a commoner, which is the best scooter in the town and he/she would chant old-fashioned Honda Activa's name for sure and why not? The Activa has been ruling the roost for a very long time now and the sole reason for its stupendous success is its reliability, conventional design, quality and of course easy maintenance. Notwithstanding is the not-so-good competition at present to dent popularity the scooter enjoys amongst the masses, however, Activa makers will have to buck up sure for they can't enjoy this position for long.

There are other brands in the segment that are relatively new but have been having their share of success but have not been able to touch the pinnacle that the Activa has been maintaining for years now. Nevertheless, Suzuki with its Access 125 did make an impact and impression but with the evolving transition in the scooter segment the demand for stylish design teamed with healthy performance has become the priority for the scooter makers and thus, Suzuki has rolled out its new scooter Suzuki Swish into the market, let us see what this scooter has got to offer to the Indian consumers...

Style, design and appearance
While Suzuki Access 125 appealed to the older section of scooter consumers the new Swish is all set to grab the attention of a younger buyer; rather it might well be the choice for first-time scooter riders. And that is because of the sheer style that the Swish exudes and the new generation rider will surely be impressed with the lines and fit and finish of the scooter. The contributing factors to the design and looks department are basically its dual-tone color scheme, new body color, funky decals on the panels and the chic rear design which complete the 'Swish' image. In comparison to Suzuki's predecessor scooter Access, the Swish weighs almost 5% lesser due to usage of ABS plastic and fiber body panels, which also means maintaining/repairing them would be cheaper than going for scooter with metal panels; I personally despise the look of excess plastic., nevertheless good features such as decent palm grips, crisp switches and good leg space compensate for the excess plastic looks. 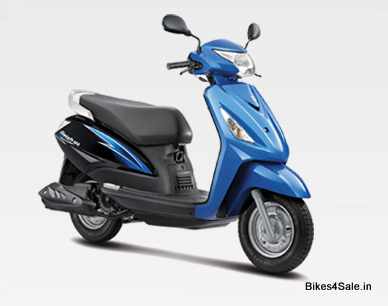 The other fittings are just in place rather they remain the same; the grab rail is made of aluminum, alloy foot pegs, the silencer cover gets a matte-finish while the instrument cluster is blue-backlit and the rear side of the scooter is uniquely designed well-combined with the tail lamp. The nicely scooped front panel and turn-on indicators give a sporty look. The Swish in many ways has all the features to attract the customers especially when talking of looks but if I have to pick one disappointing feature of the scooter then that would be the electrical & knobs that seem to be very similar to the existing scooters in the market and the other one is the under seat storage space, which can hardly fit your helmet inside. Foot pegs for the pillion rider comes as optional that you see them as standard fitments on the Access.

Engine, performance and mileage
Speaking of the engine, well there is nothing new here; Swish has borrowed the same 124 cc, 4-stroke, single cylinder engine from its older sibling Access and even the CVT gearbox has been shared. Nevertheless, the engine generates a power of 8.5 bhp @ 7000 rpm and maximum torque of 9.8 Nm at 5000 rpm and these are definitely handsome numbers to boast of a good performance more so considering the fact that Swish belongs to the 125cc segment. The major draw in Swish is its low weight feature, which in turn gives an edgy performance to the vehicle in comparison to its predecessor. And the same fact ensures quicker acceleration from stand still mode and also generates sufficient torque at mid-range when compared to Activa and Dio. The riding position in Swish is similar to that of Access and Honda Activa although the ride could get a little bumpy on bad stretches. Swish is a tailor made scooter for swift commuting in the city traffic and thanks to the telescopic suspension ride on bumpy ride too can be bearable.

As the handlebar, brake holders and the throttle are slim manoeuvring the scooter is easy and comfortable along with the light-weight factor. In all the ride quality in Swish seems to be better than its contemporaries. The CVT gearbox is pretty smooth and the vehicle gives you a mileage of around 42-45 kmpl.

Colors
The Suzuki Swish retails at an ex-showroom price (Delhi) of Rs. 46,257 and comes available in the following colors: pearl white, black, red, grey and blue.

Final Verdict
The Suzuki Swish in the company's perspective is a good move and it has quite a lot to turn on the heat for its competitors in the market. Not only that with good looks and reliability teamed with performance, the scooter has a huge ability to pull the younger crowd. But with being an under the 125cc segment scooter the Swish seems to be a little expensive, which might be a hurdle in its way to success, still the makers have targeted this to the up market youth that wont mind shelling more for its impressive style and decent performance.