New Mahindra Duro DZ 125 - Why you can count on her

The Mahindra Duro has seemed to have redefined the scooter concept in India and its introduction in the market has given cold feet to the reigning Activa but will the Romba Solid Duro DZ give these guys a tough ride in the coming days has to be seen, as the new Honda Activa has so far been the darling of Indian middle class families opting for a motoscooter. And will the new Mahindra Duro DZ usurp the place of Activa, is a big question mark on the face of Duro designers and makers.

As for the resemblance of the new Duro DZ with the older version, it takes many similarities to its predecessor, the Mahindra Duro DX especially in the looks department but with very few modifications here and there. Yet the Mahindra's re-introduction of the Duro DZ 125cc scooter clearly indicates the heated competition against arch rival Honda Activa, which has been a star-performer eversince its launch in 2000 with very simple yet dependable mechanicals. The following technical details and review of the same from the rider of the new Duro DZ might help at least some readers take informed decision. Let me talk Duro DZ!

Looks aint everything
The new Mahindra Duro DZ is a product of conventional designing school. What does it imply? Simple - it would appeal to many Indian families, so bang on target there by Mahindra! The perfect blend of technology, utility and performance prompts me unbiased to give the new Duro DZ full marks, almost.

The apparent feature in comparison to the old Duro DX is the distinctive horn-rimmed headlamp in the DZ version and of course it upholds the physicality of the vehicle and also the clear lens enables better illumination. The wider headlamp enhances depth and width of visibility during nights. The front mud guard has been modified a bit to integrate the telescopic suspension. The eye-shaped turn on indicators and the graphics are decent enough if not very much eye-catching. The rear view mirrors are in black while the grab rail takes body color. One might frown at the conventional analogue instrument cluster though. Come on folks at Mahindra, its time to outgrow the conventional stuff. As for the under-seat storage space, you ask her to swallow, she is ready to accept and hold much more than just your helmet, about 20 L of it and it becomes the scooter with largest under seat space in the segment. There is also decent storage compartment in the front to store petty stuff including tool kit and some paper. But the bad is here, Mahindra Duro Dz still wants you to lift her seat up for fuel refill, another oh-so-huh feature I can say.
The broader seat saddle offers good comfort for the rider and the pillion and as the scooter is light in weight with saddle height being low it is quite easy to manoeuvre the Duro DZ through even tight traffic. But one might complain of the absence of a mobile charger, which has become an integral feature of many contemporary moto scooters. 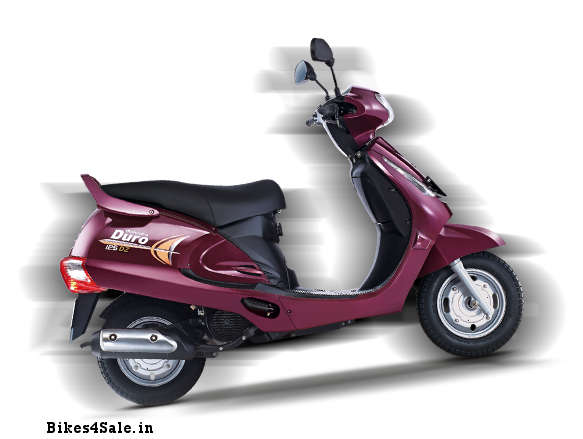 Engine, performance and mileage
The Duro DZ is powered by a 4-stroke, 125cc engine that delivers max power of 6.0 KW at 7000 rpm and torque of 9.0 Nm at 5500 rpm, so that explains the Duro's superb pick-up & multi-terrain acceleration which makes ride good even on tough terrains and terrible roads. And do not have doubts whether the scooter will offer a smooth ride or not, as the telescopic suspension just does that with utmost ease. While the top notch ground clearance offers great balance over speed breakers and bad roads. Do not worry about safety and stability, as the scooter's long wheelbase and good ground clearance coupled with broad headlamps and decent braking system ensure very stable and safe ride and thus, you can ride along happily with your family even on bad roads at nights.

The new Duro DZ has a big fuel tank that can hold 6 litres petrol, also you can expect a fuel economy of 42-47 kmpl even in city traffic. I kind of hit the 45 kmpl mark several times while not compromising with the speed, so feels at steady speed one can achieve even 50 kmpl economy, Mahindra Duro DZ deserves a pat at this.

Colors
You can choose Duro DZ from a range of exciting colors; pearl white, mystique gray, fiery black, supreme silver, royal purple, derby red and cappuccino brown. I drove the supreme silver colored Duro and fell in love with the color instantly. It kind of absorbs lot of dust and dirt without actually looking dirty (good for a lazy bone like me).

Final verdict
Mahindra has done a good job with the new, improvized Duro and the new Duro DZ 125cc is for those people who are looking to handle an all-new machine with more power and more fuel economy. I wont say that the Duro DZ is the best choice but it certainly is a refreshing change in the scooters stable. The Duro DZ is also for beginners who want to be different and it comes at a special introductory price which prompted me to go for her. If all the reasons aren't enough to prompt, then let me add this, Mahindra offered 6 free services for the scooter. The scooter was launched after extensive testing on roads and should be add a feather in the cap of Mahindra automobile engineers. Have no doubts, but go take a test ride to believe what I said. You may not regret for buying her.

I want to know how many service centers available for Duro DZ and spare part is easily available or not for Duro DZ.

Thanks,
Kedar
By Kedar Bhandare on 27-04-2012
Add Your Comment
Low Interest Bike Loan