The 'Bharat bike' new Bajaj Boxer 150 seems to knock out many of its contemporaries with its launch. And no it is no mere old wine packed in a new bottle by any stretch of your imagination. If you don't appreciate this workhorse I don't know what else will you.....read on!

The first version of the Boxer was launched way back in 1997, and it was under the entry-level segment. Nevertheless, it became a super success story in the history of Indian bikes, and with wonderful marketing strategy Bajaj Auto eventually extended Boxer success with launch of new variants such as AT, CT and AR . And the next obvious step by the Bajaj was expansion and so the company stopped making Boxer in the year 2004. It was substituted later by CT Boxer 100, which again witnessed humungous success in the market.

Now with the launch of Boxer 150cc bike the Indian two-wheeler major is sure to make a huge difference in comparison to its predecessors as well as competitors in Hero, TVS, Yamaha, Honda and Suzuki stables. And the new Bajaj Boxer 150 is mainly targeted at the semi-rural as well as the rural riders, and rightly so because this is where the actual "Bharat" resides. The city dwellers don't have to be disappointed at all, as the new Boxer 150cc will be available here too and the electric start model of the bike will cost you just a little above 40k. Just imagine owning a 150cc for a take away price of 40K when 100cc bikes in the market bear a similar price tag? You will be in for a celebration in this regard.

Looks aren't everything.....
Do not harbor great expectations with regard to the looks of the new Boxer, as it is not people who fall for physical appearances. I will put it straight, Bajaj Boxer 150 is a simplicity personified bike with absolutely no frills and fancy graphics or for that matter has anything that would grab second glance from eyeballs. As Rajiv Bajaj puts, the company has tried to build a tractor on two wheels, overrated statement though yet Boxer 150 is a sturdy machine, which can put all the gaudy plastic machines that do no work other than some muscle here or there to shame. And the generous use of metal for the body panels testifies the fact that the bike is undoubtedly a solid vehicle and the "boys can have all the fun" with so many jazzy bikes out there. The rear twin spring SNS suspension along with a solid chassis and the swing arm offer an efficient riding quality in the rigorous rural conditions. The seat, headlight and tyres are bigger, which overall ensures a comfortable riding experience. The Boxer 150 is based on the traditional principle and is a basic bike with practicality and simplicity being the two important factors in building the bike.

Engine, performance and mileage
The new Boxer is equipped with a single cylinder, air-cooled, 144.8cc motor that produces peak power of 12.01PS @ 7500 rpm and a maximum torque of12.6Nm @ 5000 rpm. The 4-speed transmission comes with all-down shift pattern and the electric start is a standard feature. The conventional gear shift pattern is not very pleasing though nevertheless it is precise.

Riding on potholes is comfortable with a wide seat, big tyres and the tall handlebars give the rider all the stability. Remember this a budget motorcycle and expecting too much from the bike is simply unfair but what I would like to mention here is, performance and of the bike handling might surprise you, as they are reasonably good just that you should not compare it with a racer bike. It is perfect for daily commuting with comfort and that too with a little gas in the tank that is it. And the bike gives a good mileage of 55 kmpl, which is very good in the scenario of petrol price revision once every two months. 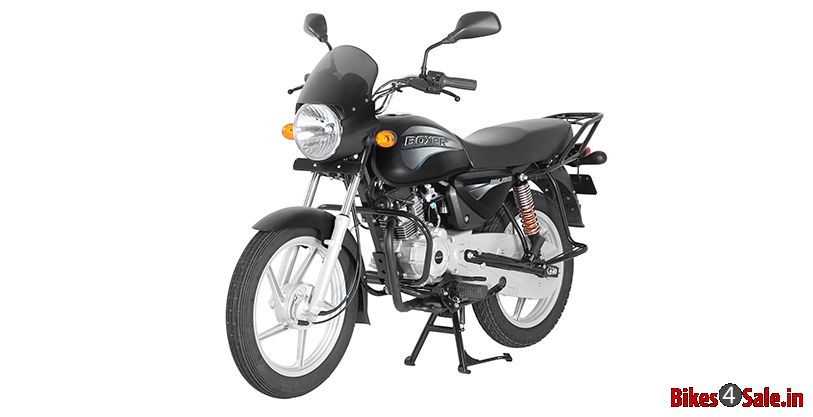 Final verdict
The Bajaj Boxer 150 is surely a common man's bike and its major plus point is its sheer simplicity be it in terms of looks, power or performance. The bike does not boast of any over-the-top features or qualities. So it is definitely not for plastic-loving people rather people who look for fancy graphics loaded bikes that make huge holes in the pocket and might entertain eyeballs for a while yet Boxer 150 sure will make a working long-term companion. Do not look for oh-so-good technicalities in the Boxer 150 but this surely is good enough and comes at oh-so great price.