The term power cruiser is too unfamiliar in the Indian market. However, when Bajaj showcased their model Pulsar CS 400 in the 2014 Auto Expo one thing was pretty sure, they are gonna take the competition to a whole new level. It is true that 300cc+ two-wheeler market is dominated by the undisputed king, Royal Enfiled. Like every two-wheeler maker, Bajaj too eyed this market from the very long days itself. Therefore, rather developing a classic motorcycle, they decided to bring out a new model on their much popular and highly rated motorcycle platform, the Pulsar. During the early development stage and even at the time of revealing it was tagged under the Pulsar moniker.

It took more than 2 years for the Chakan based two wheeler makers to develop this bike into a mass-produced model. In the meantime, they even changed the name from Pulsar 400 CS to Kratos 400 and finally registered as Dominar 400 before the official launch in India. This bike is regarded as one of the most anticipated and talked bikes in the last few years. Last week we had an opportunity to test ride this flagship model of Bajaj.

How The Dominar 400 Looks 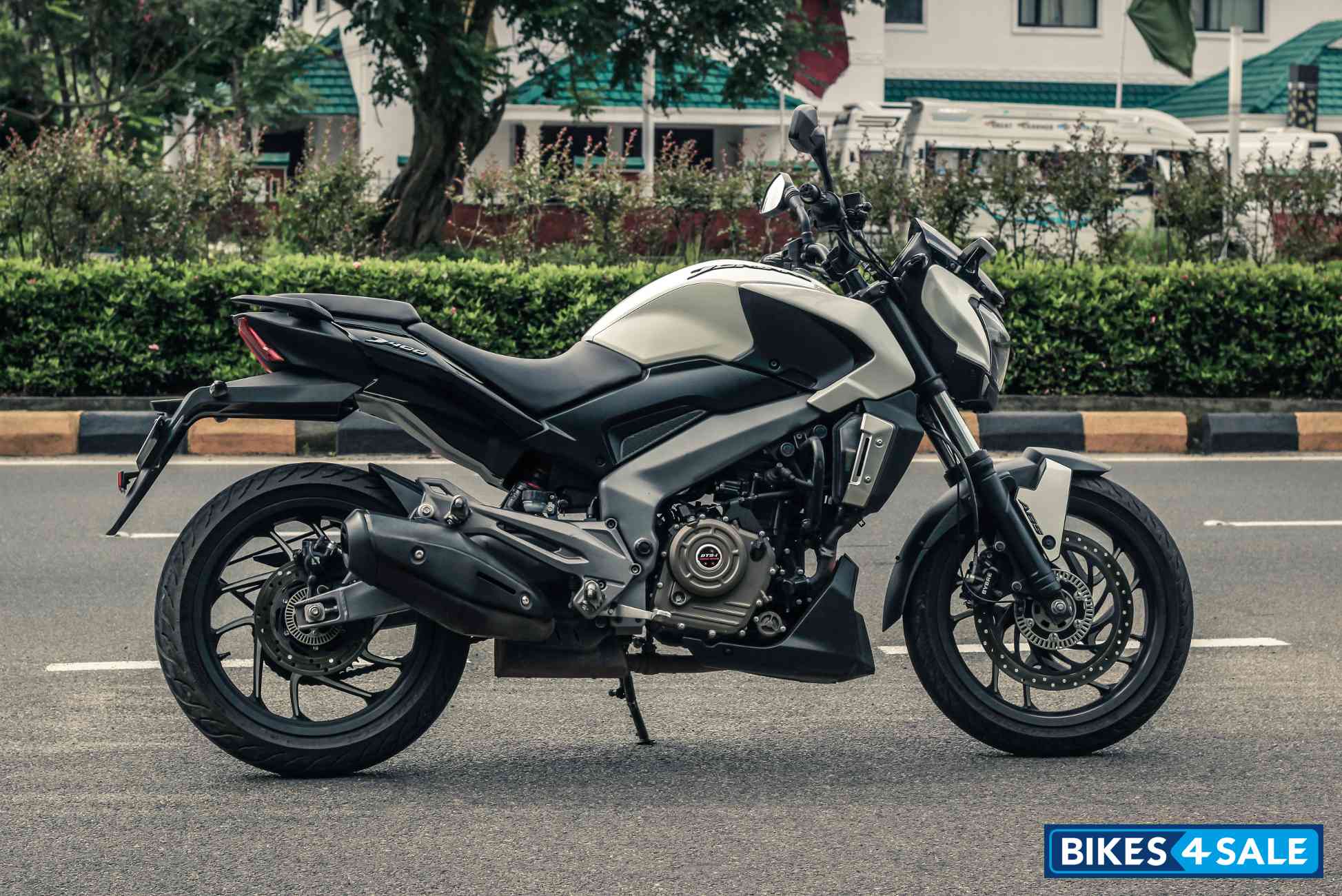 It is clear that Bajaj engineers had developed this bike after getting inspired from the Ducati Diavel range. The Dominar 400 shows off sleek and powerful proportion to the eyes. It has already carved out a distinctive slot in the two-wheeler industry. The first thing you notices is the new full LED headlamp with a whole new aggressive design. This headlight can be used in four different ways including the conventional high and low beam profile. There are two separate switches mounted on either side of the handlebar to control it. However, the illumination of the Dominar is exceptionally good and it also gets AHO feature. 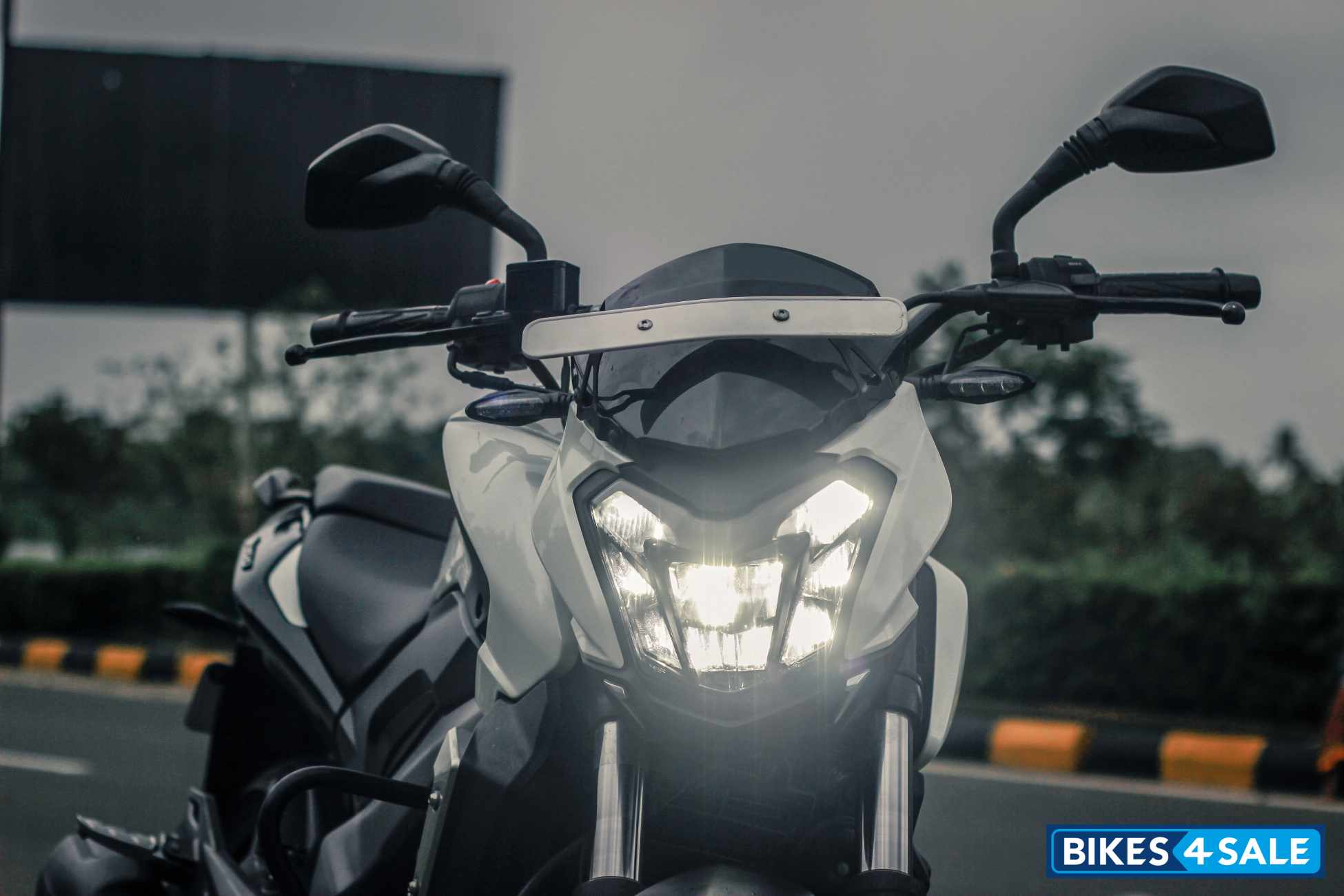 The Bajaj has made only a fewer changes in the Dominar 400 from the concept model Pulsar CS 400, showcased at the Auto Expo 2014. The belly pan, fuel tank extension, radiator shrouds, split seats, split grab rails and the visible steel perimeter frame has been retained in the Dominar 400. 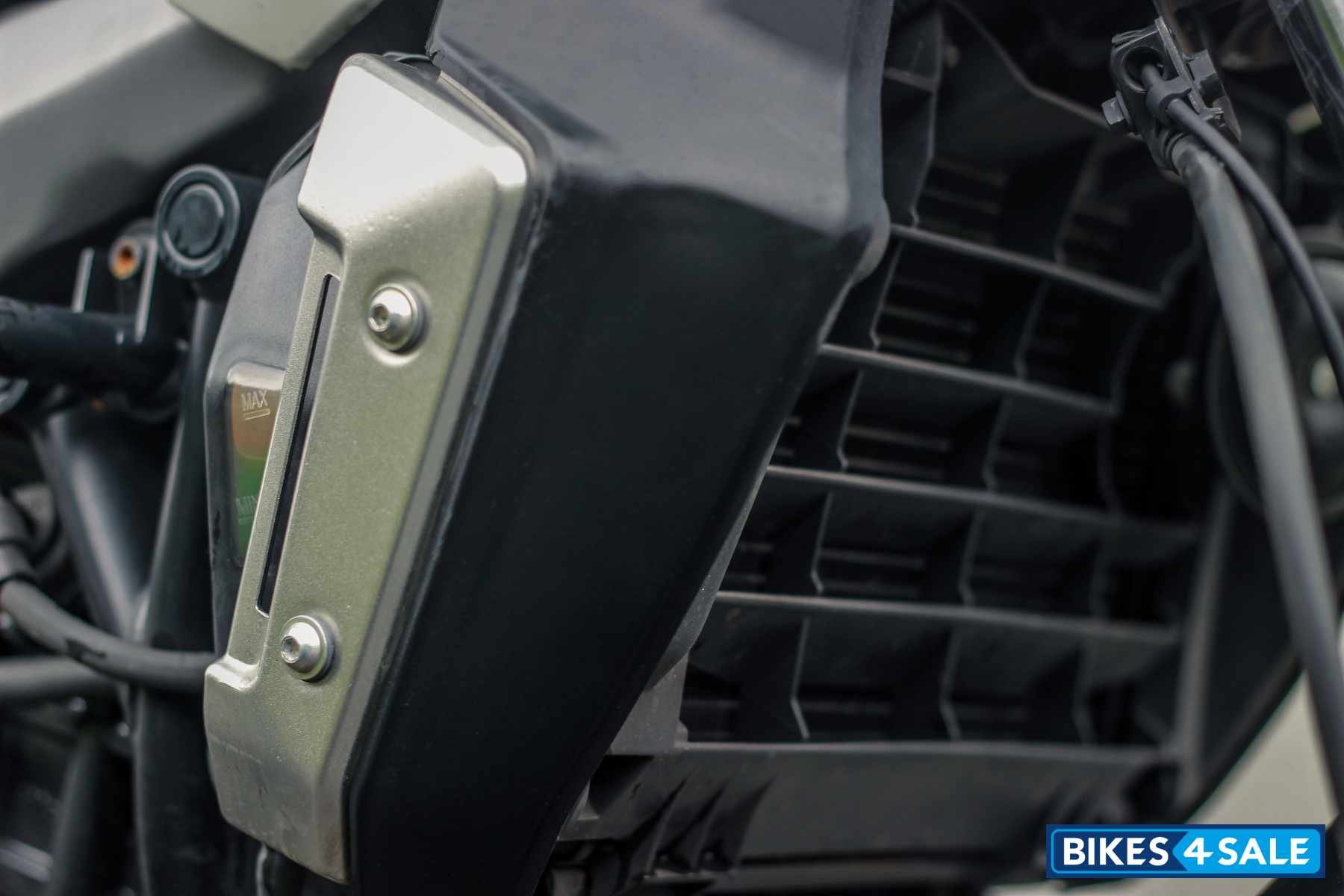 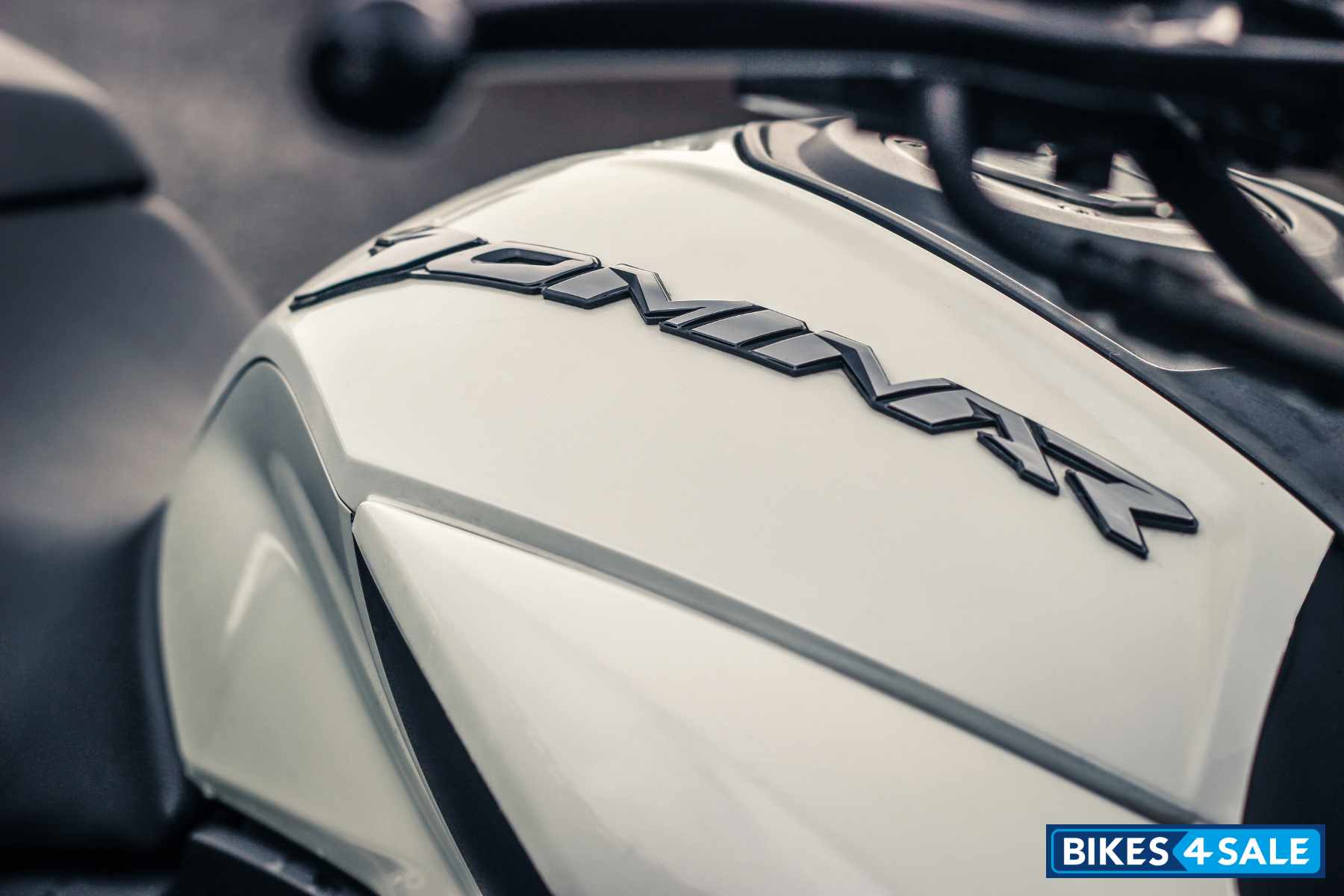 Dominar features a large 13-litre fuel tank which is perfectly shaped to grip the knees and offers a confident riding position. This 400cc Bajaj bike gets split instrument console, which is found in premium bikes (the Ducati Diavel). On moving to the tail section, the split grab rails and LED light has given a mature look to this bike.

The primary unit is fully digital and placed at the conventional position near to the handlebar, while the second unit is positioned over the fuel tank near to the fuel filling cap which displays all the warning lamps such as ABS, side stand, oil and engine. The split console is rather a different feature, but it is difficult to peep into the display with a full faced helmet on. The fully digital instrument console gets rev meter, speedometer, trip meter, fuel gauge and clock. However, the gear position indicator and average fuel economy have been a let off from the makers. 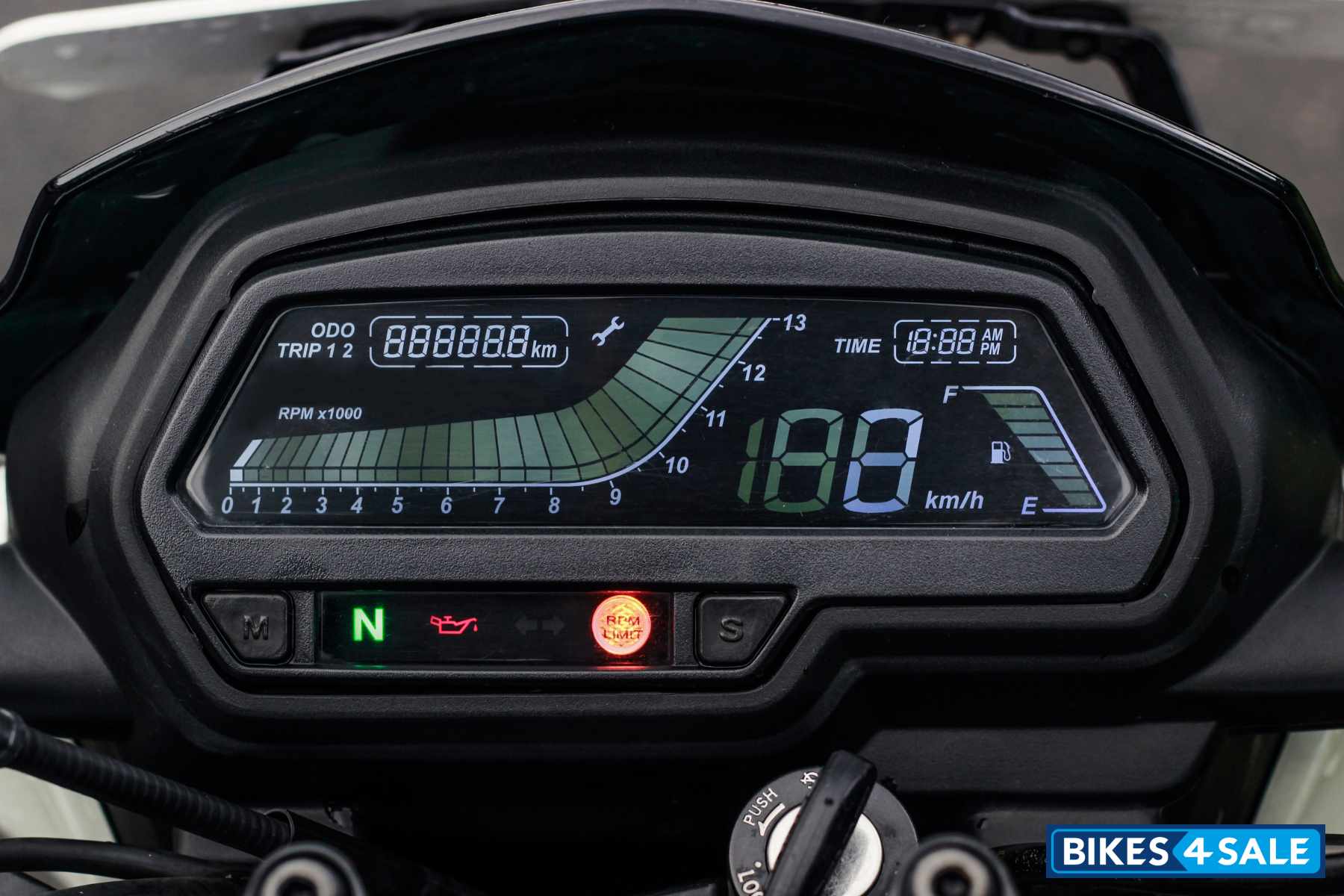 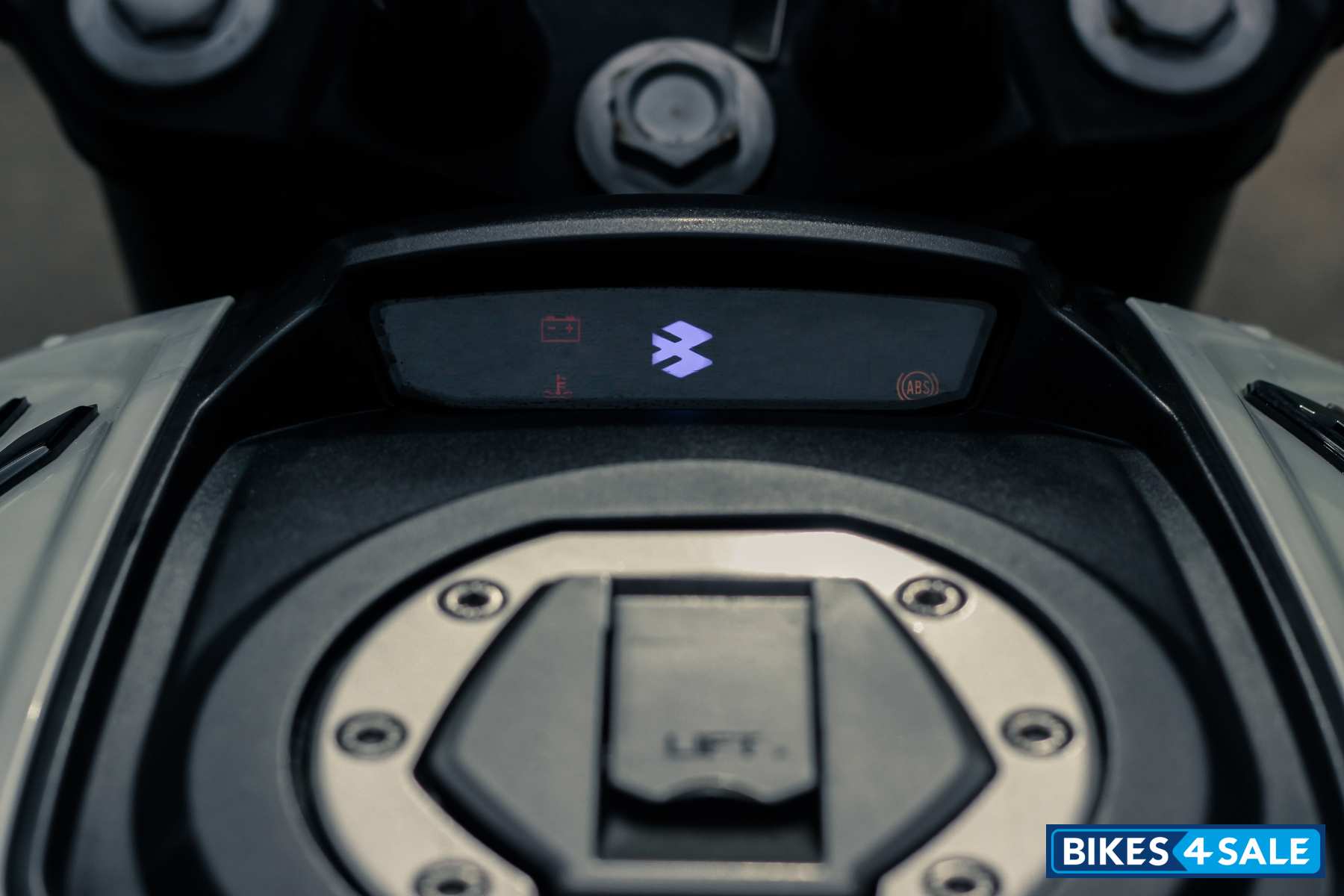 The rider saddle found in the Dominar has been borrowed from the KTM, which offers a bit more comfortable for long rides. Along with that, rear view mirrors are also taken from the Duke 390. On moving to the tail part, it is neat and looks more mature than Pulsar siblings. The split LED tail lamp found in the Pulsar 180, 200 and 220F has retained here in the most convenient way. The machined alloy wheels and the new sleek exhaust kit are other attractive additions of the Dominar. 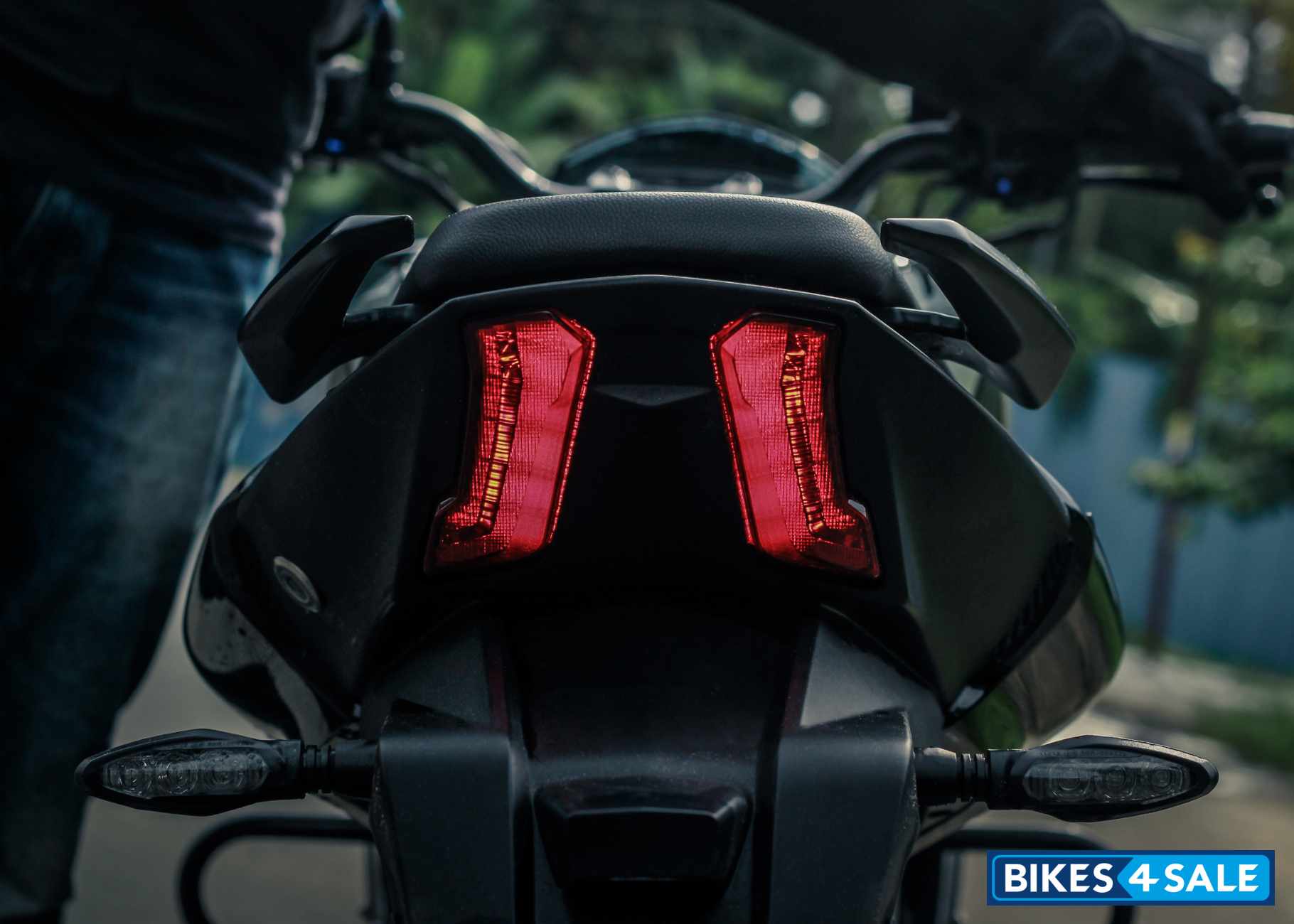 The brilliance of the Dominar lies in the engine department. It uses the tuned version of 373.2cc, a liquid cooled mill with SOHC found in the KTM Duke 390 and RC 390. However, the engineers of Bajaj has treated it with their Triple Spark Technology to suit its urban motoring. It is rather a tamed version of the Duke 390 with power and torque figures that even suits the least experienced riders to give a try. This single cylinder unit houses 4 valves, which uses advanced fuel injection technology for refined power delivery. It churns out a maximum torque of 35Nm @ 6500 rpm and a top power of 35 bhp @ 8000 rpm. The power plant is teamed with 6-speed constant mesh gearbox which is subtle and far better than the younger siblings. Moreover, it gets a slipper clutch which is usually found in the high-performance sports bike helps in effortless engine braking and quick upshifts. 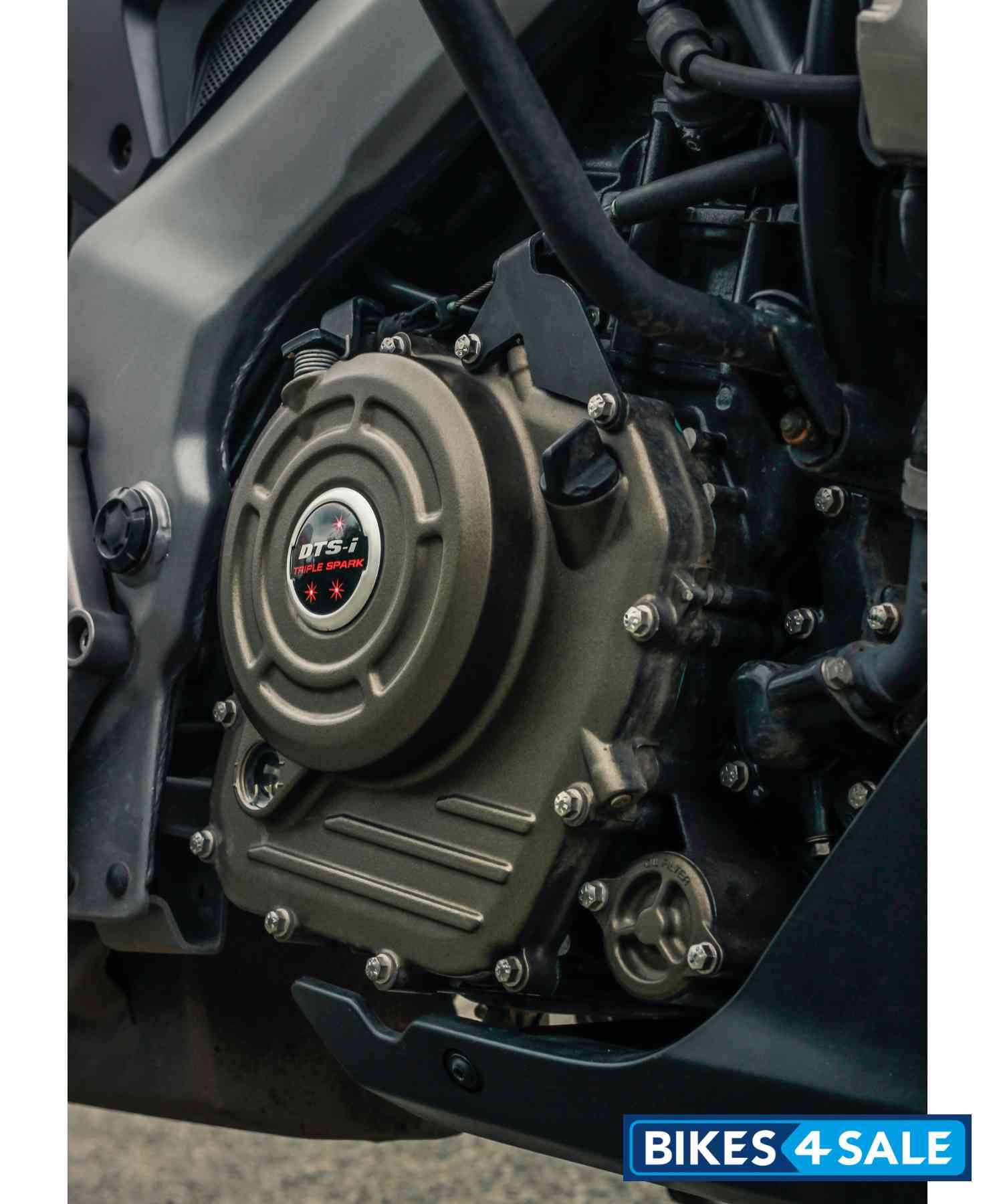 Unlike KTM Duke 390, Bajaj has decided to favour the rideability of its machine rather than performance. Therefore, the engine has been tuned carefully to deliver equal power and torque. It does generate some buzzing at higher speeds, but very low compared to the Enfields. The Bajaj had tried their best to prevent the rider get affected by the engine vibrations to their best. Another striking feature of the Dominar 400 is the heat management. Thanks to the Bajaj's liquid-cooling technology which works brilliantly to dissipate the engine heat effectively.

When compared with the Duke 390, 200 or even the Pulsar NS 200, Dominar 400 feels easy and comfortable to ride. As I mentioned earlier, power comes in smooth and one could get a rich amount of torque even in the lower revs suiting its city rides. Even though the red line of the engine starts from 9000 rpm, the machine feels happy to ride at around 5500 to 6000 range. Anything above 7000 feels bit vibey. The performance of the bike isn't aggressive or fierce like a Duke 390. All it does is supplying a healthy mid-range torque for highway cruising and city rides.

The exhaust note of the Dominar 400 is similar to the NS 200 but in a more mature fashion similar to that of Mahindra Mojo. It is smooth and refined at start-up. The sound alone could separate this motorcycle from other Bajaj siblings. 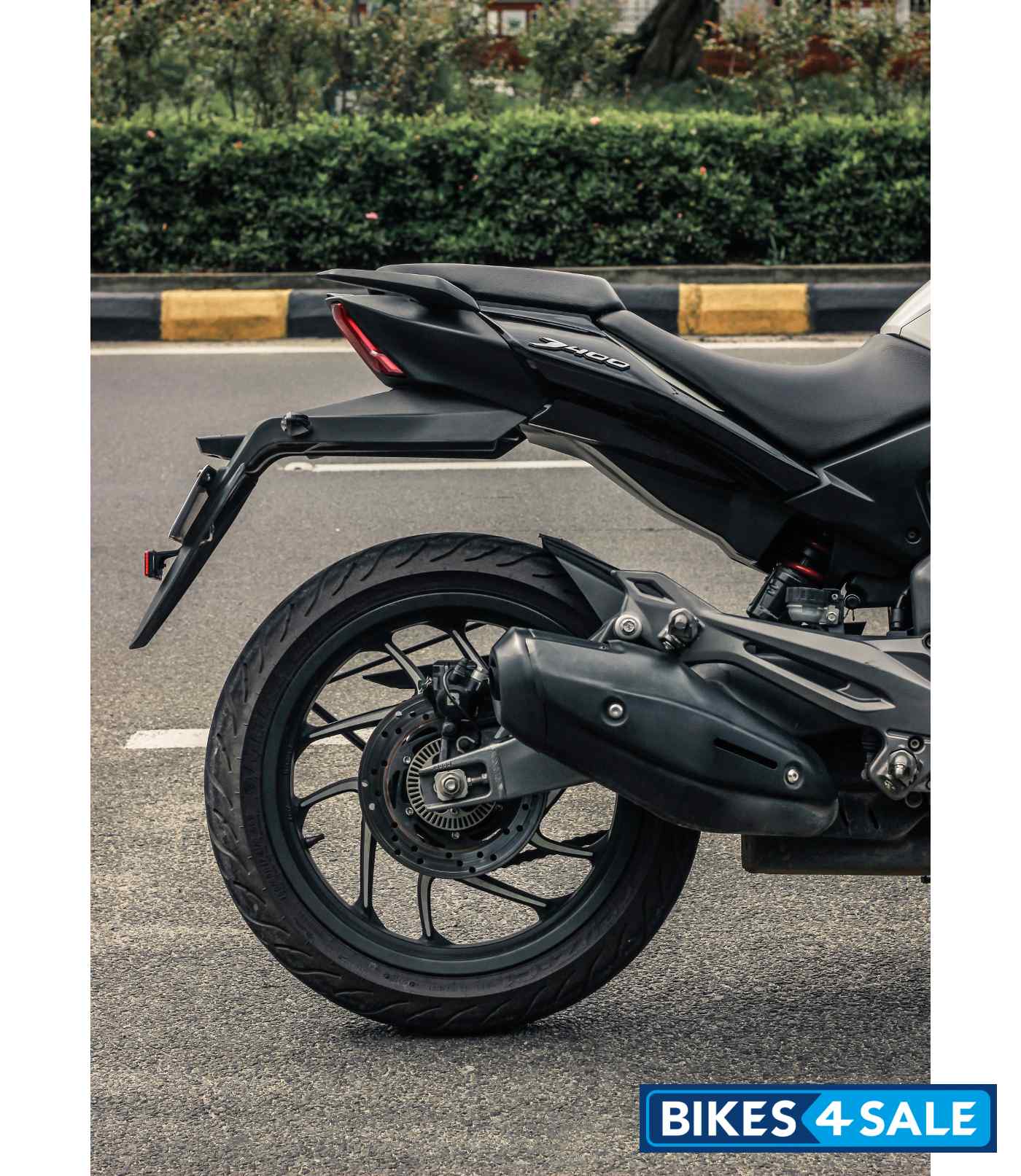 The 373cc, liquid-cooled engine is fitted into the perimeter frame with elastomeric dampers to reduce the vibrations. Bajaj has been using this same beam type perimeter frame in their NS and RS 200 Pulsar siblings. The substantial element of the comfort of Dominar 400 is their 43mm, telescopic fork at the front and multi-step adjustable mono shock suspension at the rear. Braking duties of the Dominar 400 are dealt by 320 mm disc brake at the front and 230 mm disc brake at the rear. Both the front and back get dual channel ABS, which is quite an astonishing feature for a bike priced around 1.5 lakhs. 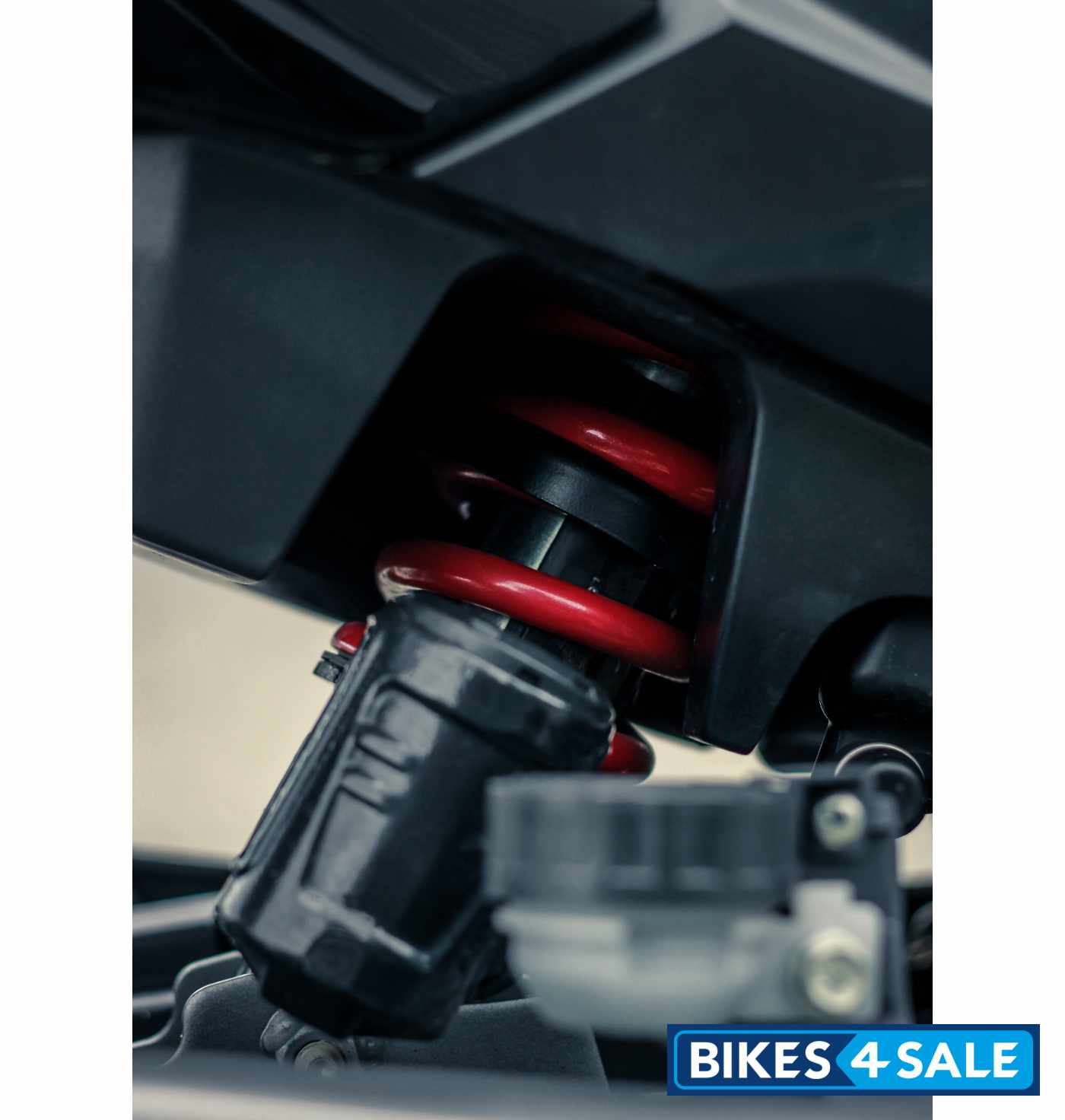 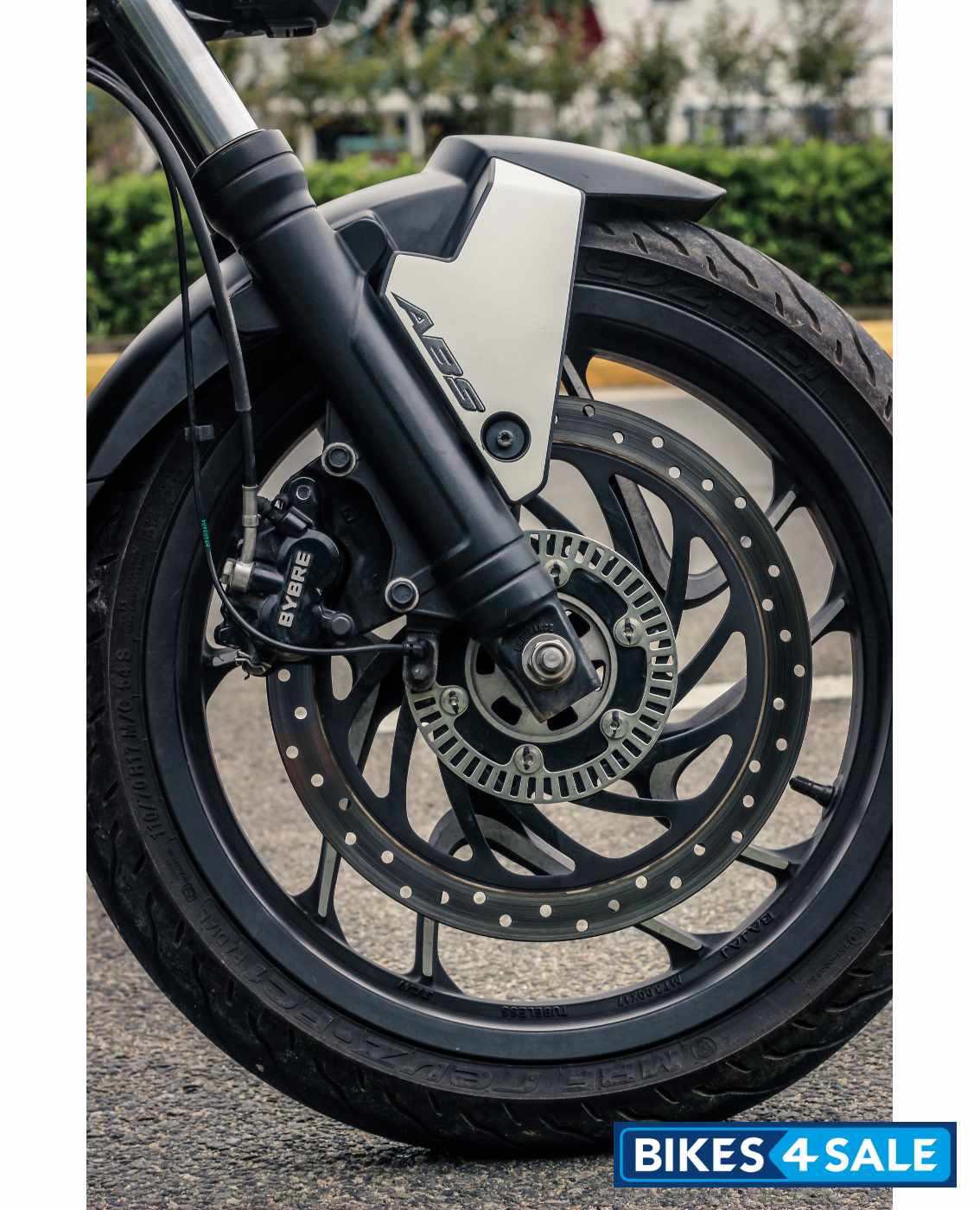 With the launch of Dominar 400, Bajaj has shown their interest in high capacity motorcycles. Their desire for developing high-performance bikes has reached from the 150cc Pulsar to the recently launched Dominar 400. Rather than developing a successor of Pulsar NS 200, they had created something out of the box to target the cruiser market dominated by the Royal Enfield. However, the Dominar 400 may lack the classic looks of a cruiser bike, but it does have the essence to dominate the Enfield market with its advanced engineering. 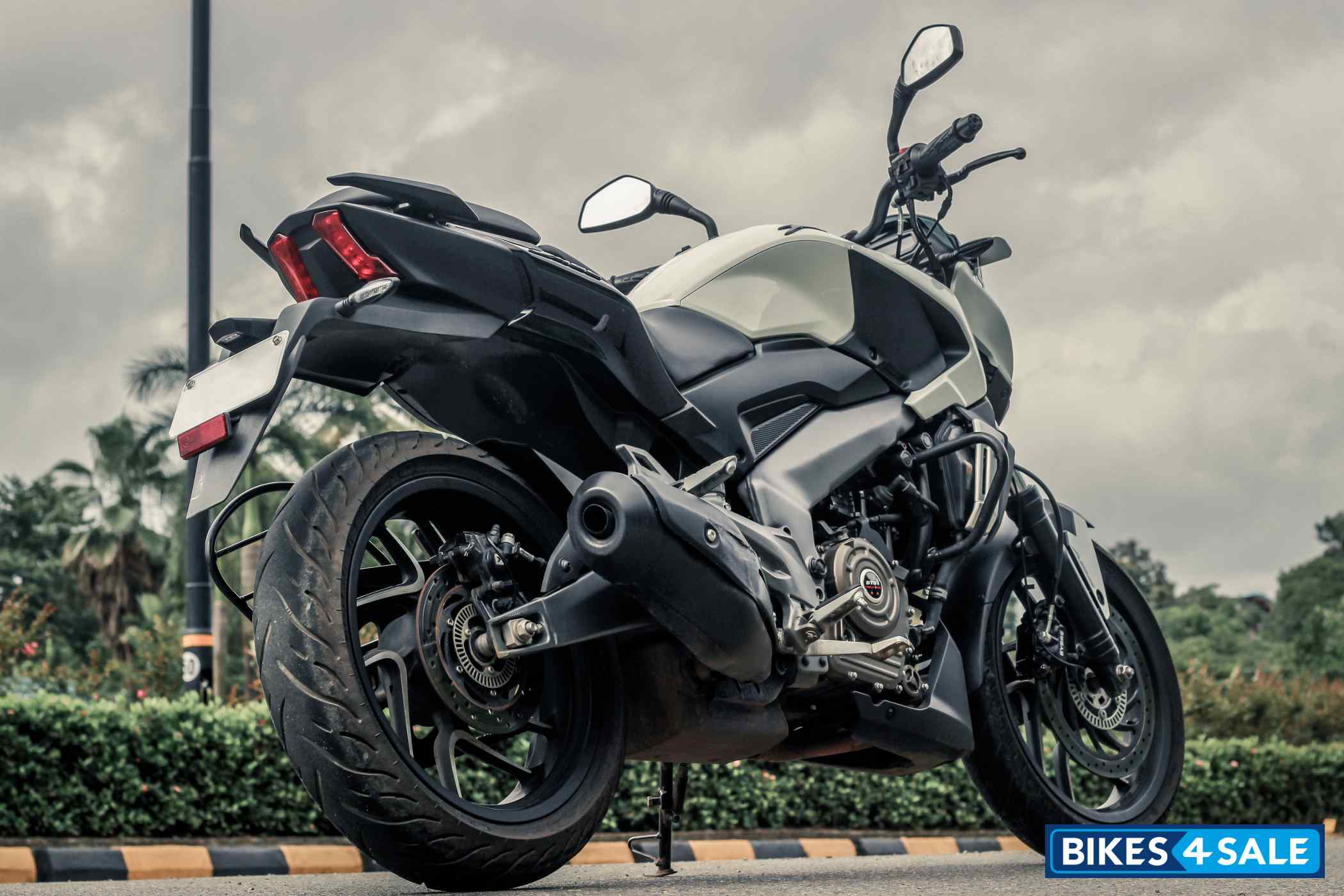 There are few areas on which Dominar has to be tried and tested off, especially the gearbox. The issues with the gearbox have been a major problem that Bajaj has been facing for years. This would be the main obstacle that Dominar has to surpass, in order to stay strong in the market. While test riding the vehicle, I found difficulties to steer the vehicle at idle. The massive 182kgs happens to raise questions at times. Altogether, the new Dominar 400 does things really good. Apart from the unnecessary vibrations, you come across after 115kmph, the bike is smooth and powerful at the same time. The power delivery is always available at a twist of the throttle. According to me, Dominar 400 is one of a kind motorcycle available in the Indian market. Even though it bears the heart of Duke 390, it isn't agile or aggressive as the Duke. The Dominar 400 targets a particular community who prefers a powerful motorcycle with optimum power delivery and long-distance cruising characters. 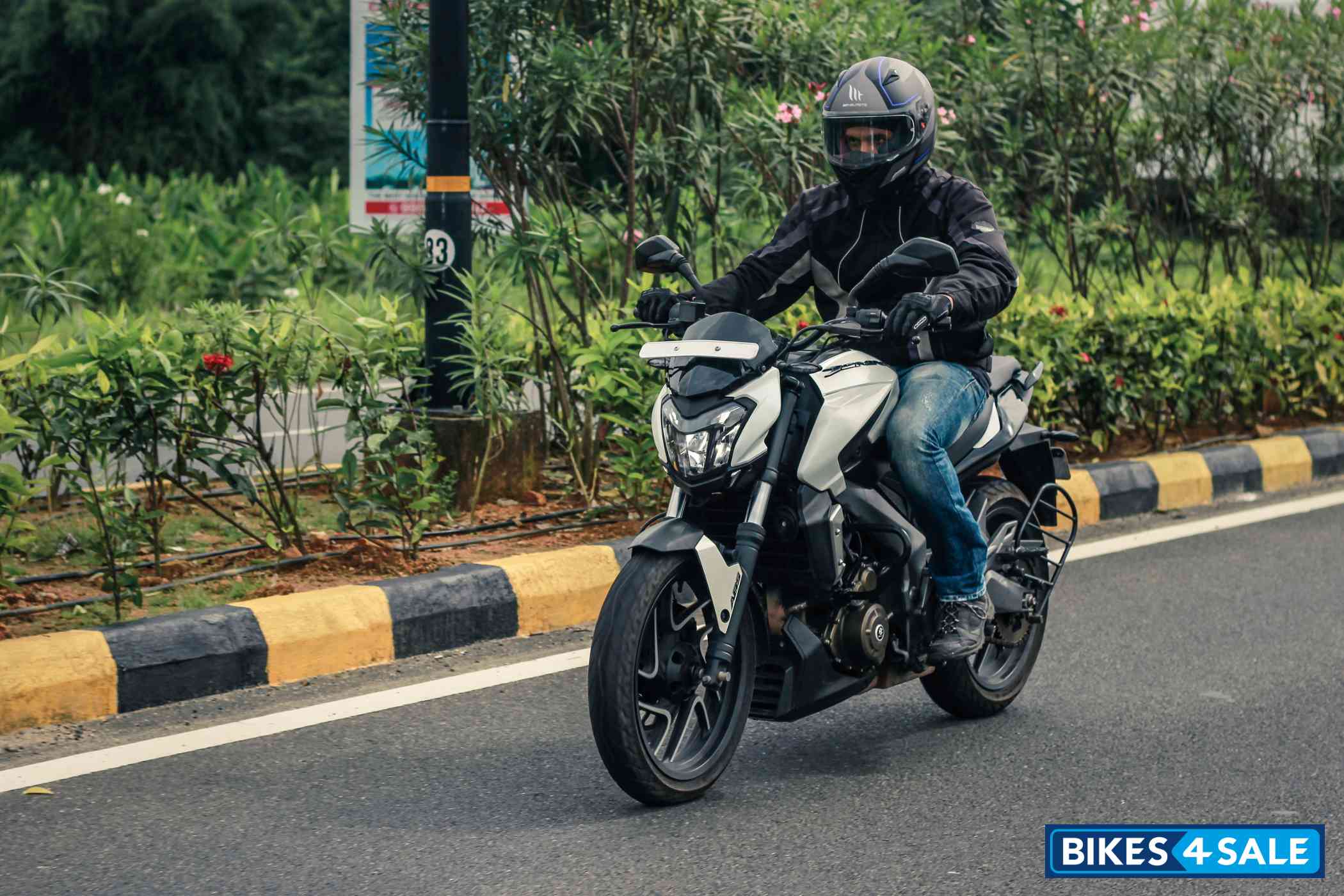 Bajaj introduced Dominar 400 as a perfect replacement for the Royal Enfield as well as for those who cannot afford Duke 390. However, it is rather a different motorcycle which cannot replace the Enfield or the Duke 390 by any means. As we mentioned above, Dominar is a power cruiser with its own unique features and characters. With the launch of this flag bearer, Bajaj has raised their bars for developing high capacity, advanced machines in the Indian market. The future looks well lightened up for the Dominar and Bajaj unless they face any roadblocks within or outside the brand.

Fantastic
By Bidesh Hazra on 10-07-2018
As a tourer, Mojo offers better seating and riding posture. It also delivers more torque. Bajaj calls their Dominar as a power cruiser, a different segment. Therefore, one could not compare the two. However, Mojo is a better vehicle for me after test riding the both.
By Arjun Thambi on 21-08-2017
Is Dominar better than Mahindar Mojo?
By Ashish Mehta on 21-08-2017