Engine Control Unit commonly known as ECU is a digital control unit that controls/adjusts various aspects of an internal combustion engine. The first attempts at developing a control unit was done by BMW on aircraft but the modern ECU development started in the 1980's. With the development of the ECU, maintenance has become easier and engines can be fine tuned to operate according to the desire of the rider/user.

The entire system consists of sensors, actuators, wires and signals. The sensors act as the main receptor units of the ECU, where the ECU acts more like a brain/control centre. Signals from the sensors are transmitted to the ECU and the information is processed and the subsequent signal is sent to the actuators to begin their operation. The feedback from the resultant action is again picked up the sensors and is sent to the ECU to make adjustments if the situation demands. The ECU was primarily used to control/adjust the engine characteristics of any vehicle but with the advancement in technology, the entire unit has become smaller and lighter but can process faster. The engine control unit is able to adjust the amount of fuel and air coming in to the combustion chamber, control the timing of strokes and so on. However, as of today, manufacturers have linked various elements of the bike to the ECU to gain digital control. This includes traction control, launch control, cruise control. These systems can be seen in action in most of the performance bikes such as the new Kawasaki Ninja H2 and H2R and also Yamaha's R1 and R1M.

Therefore, ECU's can also be termed as Electronic Control Units because of its ability to manage several other systems of the bike, hassle free. Manufacturers have set the ECU to perform at a limited rate to ensure that the bike and the rider are safe and that the bike offers optimum usability. However, some ECU systems can be manually overridden by the rider who desires even more from the vehicle he is on. 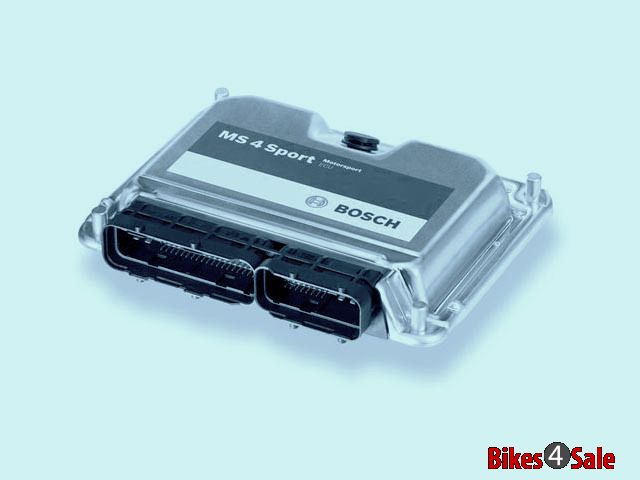 Programmable ECUs on offer are those which can be programmed to set of new values/inputs to suit the needs of the owner. Such ECUs control the same functions of the engine as on other non-programmable ECUs but with the change of inputs, higher performance levels can be achieved.
Some of the actions are:
Ignition timing
Rev.Limit
Transient Fueling
Closed loop lambda - to achieve the ideal stoichiometric ratio of air/fuel
Variable cam timing
Anti-lag

Although most of the above mentioned performance tuning upgrades can be found on turbocharged cars, motorcycle manufacturers are also bringing in supercharged bikes to enable higher upgrades.

This is a product mainly built for motorcycles of all types. The device is user-friendly and can be plugged in to any windows device using the USB cable/port. Power Commander takes control of the bike's Fuel Injection system and varies the operation of the engine components using pre-set maps that can be custom installed into the device. The product offers a large map database and offer impressive performance gains. Adjustments can be made on the device itself or by plugging in to a device to "trim" the adjustments.