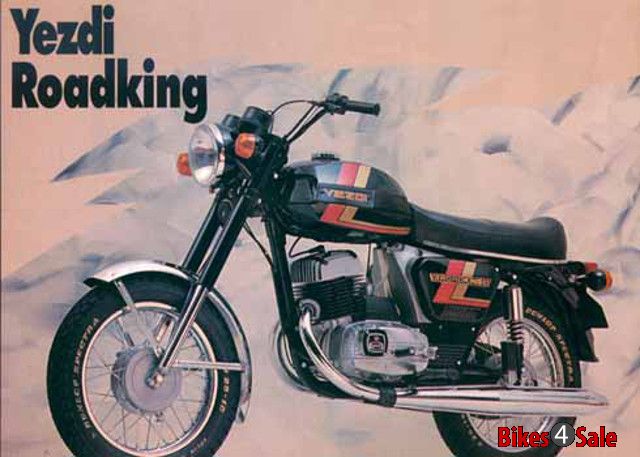 Launched in India in 1978. Yezdi RoadKing is not in production now. Discontinued in 1996.

Yezdi Roadking is considered to be one of the classic 2-stroke motorcycle ever to be built in India. It was produced by Ideal Jawa Ltd, in their facility at Mysore. They used to manufacture this motorcycle from 1978 to 1996. Roadking was the successor of Yezdi OilKing, which was a market failure due to some technical drawbacks. This particular bike was quiet famous in rallies and road races across India. And due to this particular reason, this was one such bike with so many fans and followers.

The bike sits on a 250cc, air-cooled, two stroke single cylinder engine with twin exhaust and uses a kick start for starting the engine. It can draw a maximum torque of 2.43 kgm @ 4250 rpm and cruise to a top speed of 120 kmph. The Yezdi Roadking uses the cylinder block from 1974 CZ. Like all Yezdi models, this one also uses same rod for kick starting and gear shifting. This bike also features semi-automatic clutch.

Like the iconic Ideal Jawa, the Roadking too has the same original Tesla headlight bulb. This 250 cc bike uses twin exhaust ports and makes a good exhaust note, satisfies the rider in all manner. This Czechoslovakian bike has been on Indian roads for over a decade and we can see this bike cruising in and around our neighbourhood. Like all other 2-stroke bikes we had, this one also doing good business in the second-hand sale market. 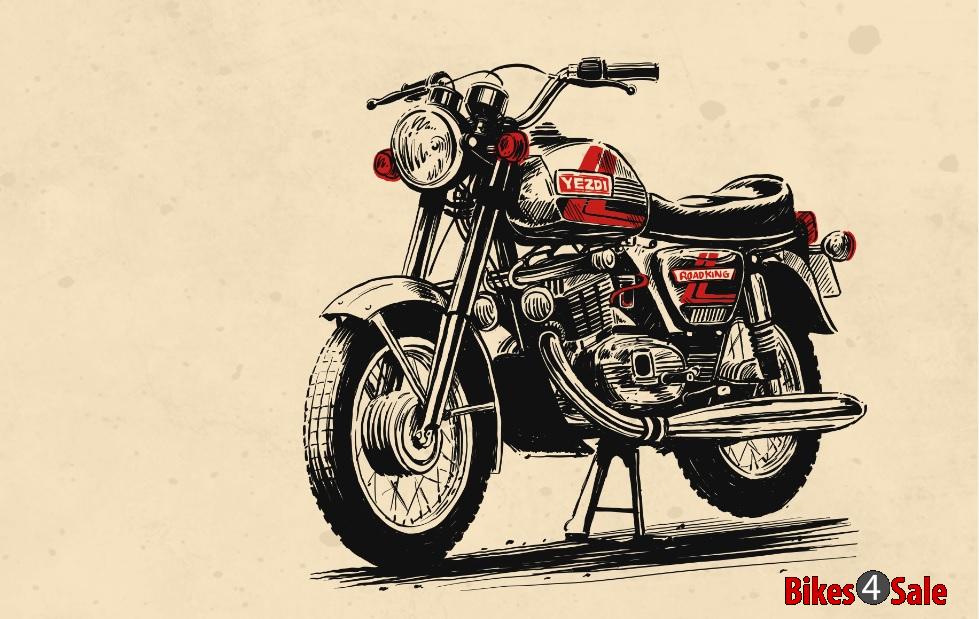 Technical Specifications
Test drive reports, reviews and news
User Reviews of Yezdi RoadKing. Write Your Review
I love yezdi
By Sukumar on 17-06-2020
I Want yezdi movie
By Movi Chan on 25-09-2019
I love this bike
By Sai on 28-07-2019
I had this bike for almost 15 years, I had the best of experience, as I love travelling, this bike has stood with me in adversity and have taken many challenges, which I am sure no bike in India can do.
In one situation while climbing up a peak in a rough terrain, the bike was climbing up in almost 80degrees and pebbled terrain I had the fear that if you I give up the throttle I would go sliding with the bike down to almost 130 feet.
But the power and the unmatched torque of my lovely bike never gave up.
NO BIKE CAN MATCH YEZDI.
THERE IS NO OTHER BIKE FOR MALE LIKE YEZDI
By Madhu Menon on 23-03-2019
Arambram ,po padanilam,vai,kunnamangala,calicut
By Niyasedathil on 09-03-2019
I love jawa
By Pravin Gadhavi on 05-12-2018
yezdi Roadking very interesting bike
its possible to bring back yezdi Roadking from Mahindra ?
By Pranesh D on 12-11-2018
I saw yezudi when I was on 8th standard afterwards I fell in love with that mechanical beast since that day I want to own it
By Akhil Paul on 31-10-2018
I love vintage bike like like yezdi
By Prince Dakala on 16-10-2018
Hard heavy metal in those days for the decades. earlier i had this motor cycle to commute to my office,starting trouble. every day struggled with this old metal to start the machine. it is not wise to have such bikes in these days,i hate this old czechoslovian technology, go for latest upgraded bikes as you like.
By Karate Ravi on 18-08-2018
I own yezdi road king 250 cc 95 model I have used imported R1 bullet KTM etc but the fun and joy in 2 stroke road king is very unique one cannot get that kind of fun In any other bikes according to me
By Ganesh Bharadwaj on 04-06-2018
im love with this legandary weapon .
the mileage is low but for this legend lovers that's enogh . forever bike fore ever value . the yezdi

i want a yezdi road king who have one
By Athul Kdr on 15-05-2018
First of all it is 250 cc bike with excellent beating and gear rod and kick rod is the same for this bike.
By Ramesh Naidu on 05-05-2018
As its name it is a road king That's it
By Chriz Abrahm on 23-04-2018
How much can i pay for a YEZDI ROADKING 1991 MODEL.
By Pravesh on 07-02-2018
I love yezdi .yezdi is the heart beat of boys
By Adithyan Adhi on 03-11-2017
I STILL LOVE MY YEZDI ROADKING BIKES TILL DATE. I AM POSSESSSING 1992 MODEL.
By Ramesh Singh on 02-07-2017
i love yezdi.yezdi bike is king for road.
By Vikraman on 29-12-2016
Starting trouble is there. But still good.
By Loges on 29-11-2016
I love yezdi roadking because,it is a good bike in India.
By Mohammed Sahil on 31-10-2016
It's a 40 years dream to have an Yezdi Road King.Its till not fulfilled as on today. with God grace I have finalized deal with somebody. Tomorrow I will take the delivery of the same. It's little fancy price 1996 modle superbly maintained. A big thanks for my God to get my dream came true
By Ravi Kumar L on 21-10-2016
My Father had a yezdi roadking but he sold it.so I still search my yezdy
By Sachin Thomas on 16-10-2016
Among all those bikes I've rode Yezdi stands first for its performance. The roadgrip it gives, the pickup it has, the sound it exerts everything is nice.....such a wonderful feeling to ride such bikes ...I loved it so much
By Megharaj on 03-09-2016
Gone are the days for solid bikes like Roadking, Yezdi, Classic.... People link only those bike made of fiber and plastic.... The real men need though steel, metallic body of bikes with roaring sound .....Roadking and all the models of JAWA are the best bikes of all the time... Waiting for its restart
By Megharaj on 03-09-2016
I drive many bike but yezdi I some special but I hate the old model design I try to modify new design but I can't install any new gagets so people try to modify new look and yezdi is fist class to long drive the comforts look like a harly .Now the king was born to rule the rods
By Naveen on 02-06-2016
I really loved this bike.Yezdi no. 1
By Harry on 11-05-2016
I love ❤ Yesdi because its really a uneque bike 🚲 and my son Thomas Kottoor also loves yesdi.
By Martin Kottoor on 04-01-2016
THE MORE IT GETS HEATED , THE MORE SMOOTHER IT RUNS,
By Savio on 05-11-2015
Tell us why you love or hate Yezdi RoadKing