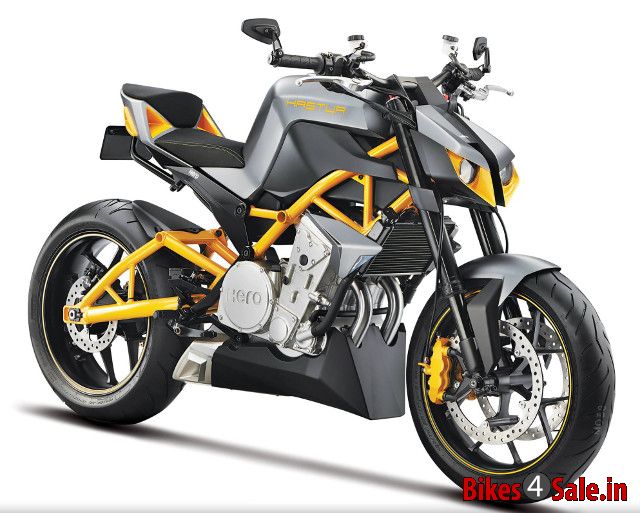 Showcased in India in February 2014.
Hero Hastur is not yet available in India.

With the introduction of Hastur in the Auto Expo 2014, Hero has raised their bars to a whole new level. It is indeed an out of box design and styling culture from the Indian brand. Hero Hastur is the joint effort of Hero Engineers and the designers of Erik Buell Racing (EBR) of USA. This naked street fighter carries many aggressive and rugged features which separate its distinguished styling from other sports bikes.

Upfront, the ferocious twin-pod projector lamp alone could dignify this concept bike. The large muscular fuel tank, velvet finished split seats, alloy finished flat handle bars with bar-end mirrors and many more attractive features make this bike a unique machine. Moreover, the steel Trellis Frame that runs from the head to the rear wheel hub is rather exposed and painted in yellow colour, which is one of the striking features of Hastur. It measures 2015 mm in length and 820 mm wide and weighing around 160 kg. It also features Pirelli Diablo Rosso II tyres at both the ends.

Hastur is powered by 620cc, liquid-cooled, 4-stroke, parallel twin engine with CSI cylinder. The engine is claimed to deliver a maximum power of 78 bhp and peak torque of 72 Nm. According to Hero, the top speed of Hastur is 240 kmph and it can go from 0 to 100 kmph under 4 seconds. 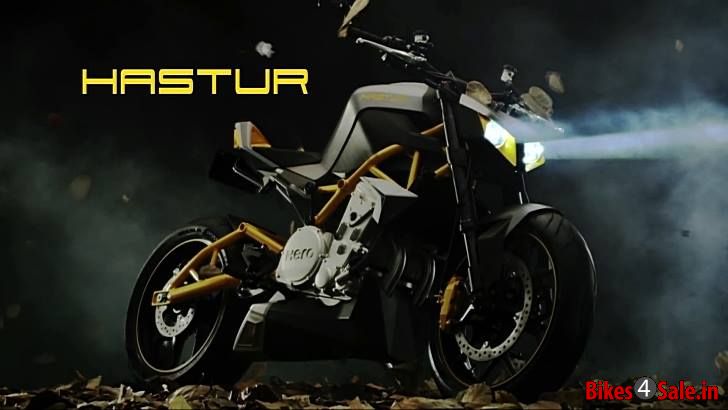 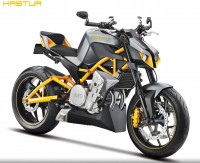 View All Showrooms
Technical Specifications
Test drive reports, reviews and news
User Reviews of Hastur. Write Your Review
Milage
By Sand on 30-10-2020
One of the best ever bike I feel. First India then 72bhp power 72nm torque great muscles
By Prasant Kumar Pradhan on 19-10-2020
Hastur one of the most famous and his fans eagerly waiting for this bike Hastur is so muscular and Hastur called is in nick name as INDIAN BUMBLEBEE And Hastur so power full and so so so so agressive bike Hastur is look like Demon Look and features also So great Hastur is the first bike In 620cc segement of compare of all 600 cc bikes Hastur is so powerful and sudden pickup 😎But hero Was still Not Launched This BeasT oh god Please launched Hastur Love you HastuR My street is waiting for you Miss you so much but one day I will Get u 😘
By Shan Cenæ on 18-07-2019
impulse is a very neat off road motorcycle I wonder why hero discontinued i just want to buy made in India motorcycle which packs a punch like impulse,in motorcycle industry its all about being unique
By Vivek Pj on 25-05-2015
I love this bike very much due to its aggresive design . A true sTrEet figHter.hastur King of street . eagerly waiting for this machine.
By Jabir Ahmed on 27-09-2014
2 years back the FZ ruled the roads, now its the Duje, when this comes out, however the price be, I'm sure every guys dream is to pwn speed, and this would be the closed on thing they can get that relates to that.

Awesome bike, though I doubt I can get one, still would live to wait for its official release!