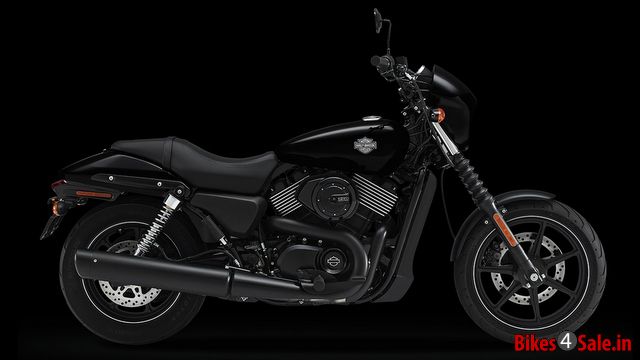 Street 750 is the most affordable Harley available in Indian line up. This motorcycle is part of their market extension program and focuses mainly on young drivers. It comes from their Dark Custom range of motorcycles. This motorcycle is built in Harley's own facility at Haryana, and this enables the company to make available this Harley at such a lower price tag.

The Street 750's power source relies on the new 'Revolution X', 749 cc twin cylinder engine. This engine is capable of producing 58 bhp @ 8000 rpm and 59 Nm torque @ 4000 rpm. The liquid cooled engine is mated with a 6 speed manual gear box and it is belt driven. The suspension department comprises of a telescopic forks for front and gas charged shocks for rear.

The mileage of this motorcycle is around 20-25 kmpl and fuel tank is capable of storing 13.1 litre which is pretty good figures for this class of cruiser bike. Unlike other Harley Davidson, the broad handlebar allows the vehicle to maneuver over busy streets and turns rather easily and more confidently.

Book a Test Drive through Bikes4Sale and we will try to get you the best offer for Harley Davidson Street 750. 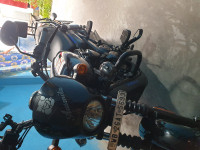 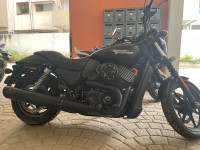 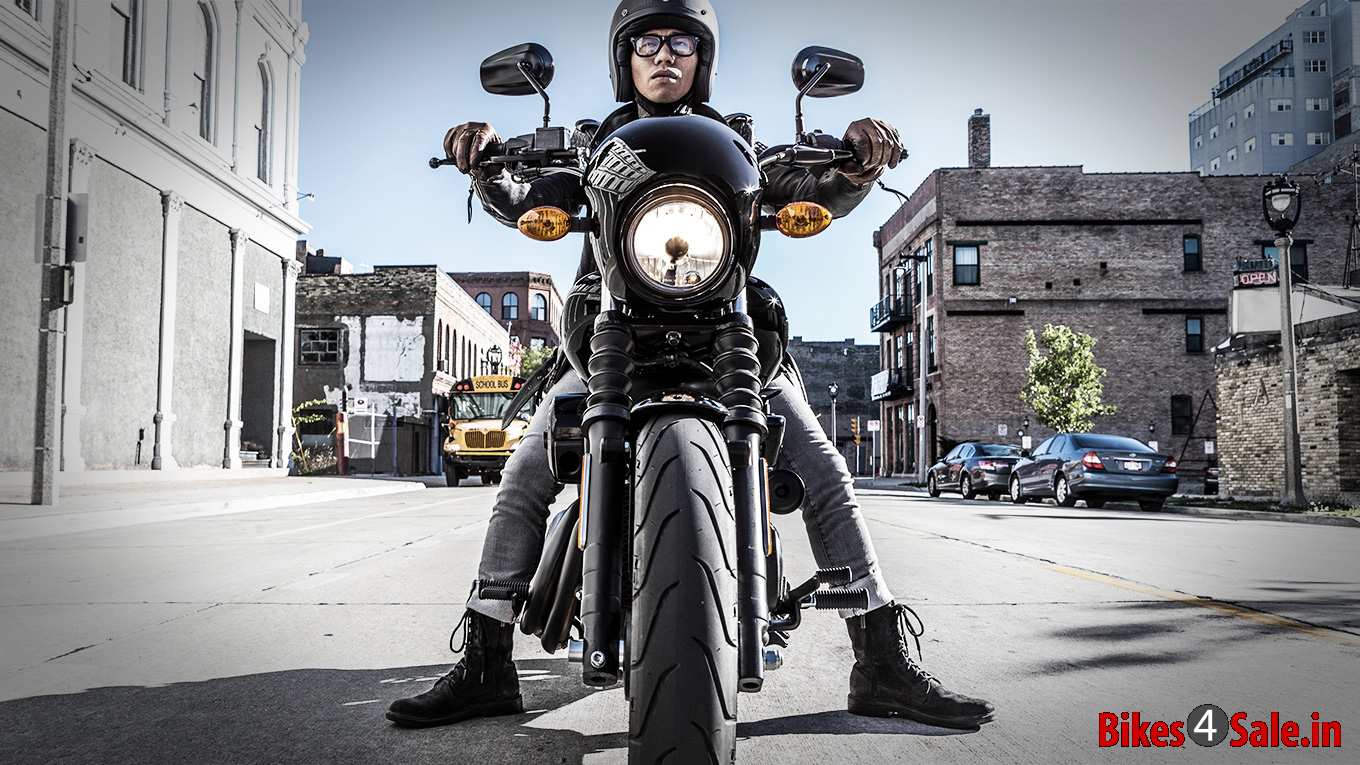 When Harley Davidson rolled their Street 750 on the Indian roads, the whole country was shocked. It was because of the two factors like price tag and it is being manufactured in India. And with the official launch on 2014, it has become the cheapest Harley Davidson in India with a price tag under 5 lakhs. From their onwards, it has become the fast selling premium motorcycle in India. This Street 750 is the first HD motorcycle to be manufactured in India. And the bike is based on a new engine and new chassis completely developed for this single model. Manufacturing in India was one of the cost reduction method followed by the makers. Harley even started exporting this model to some European and other Asian markets as well. 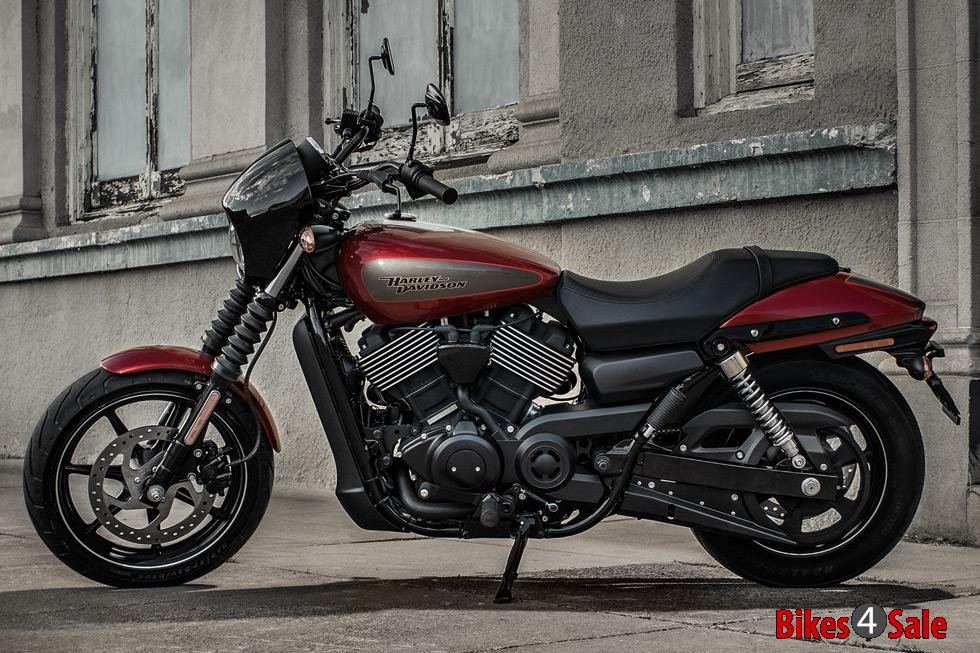 The Engine
Street 750 is introduced as Urban commuter rather than a classic cruiser. Therefore, it is powered by the lightest engine Harley has ever made. It is powered by 749cc, liquid-cooled, Revolution X V-twin engine. The mill churns out a maximum power of 47 bhp and peak torque of 59 Nm. Engineers had tuned this motorcycle to generate low torque and power by considering the fuel economy factor. Cheapest Harley means, it has to be affordable throughout it's journey. Not only that, Indians really cares about these figures. Therefore, this newly developed engine targets economy and feasibility rather than performance figures. Engine is mated with a constant mesh 5-speed gearbox for optimum power transmission to the rear wheels. Coming on to the exhaust, it is not at all a performance oriented kit, but the makers had fine tuned the exhaust note to the perfection at their facility in USA. Once you fire up the engine, you could hear the pure signature rumble of Harley Davidson V-Twin engine. 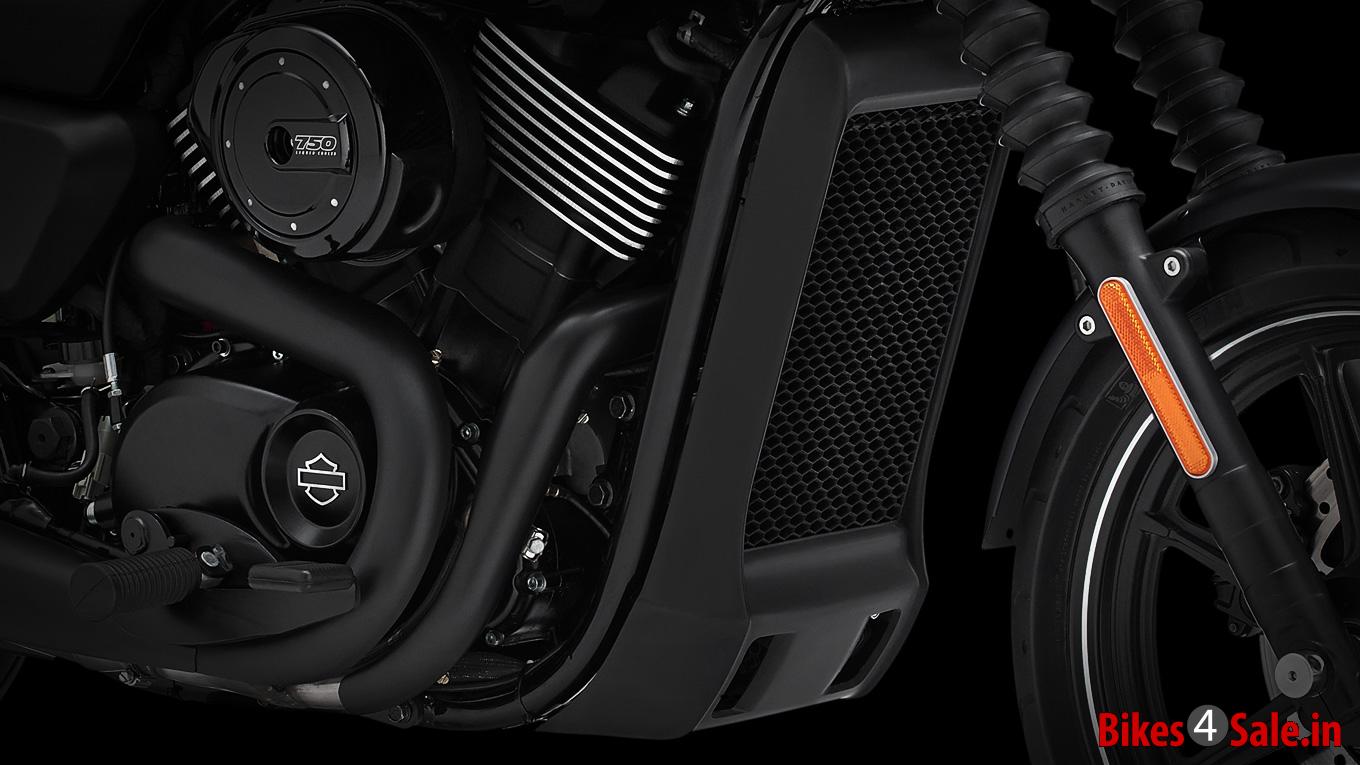 Design and Features
Harley Street 750 is a brand new motorcycle with brand new engine, chassis, instruments and even switchgears. We cannot find any of these things in other Harley. The company has opened a vast space for customization, with the Harley's own Dark Custom style. The design perspective of the bike focuses on urban mobility. The bike looks smaller, when compares to other HD motorcycles. The bikini faired headlamp, two-into one exhaust, elongated and premium seats, blackout V-Twin cylinder gives the unique identity of a Harley Davidson. 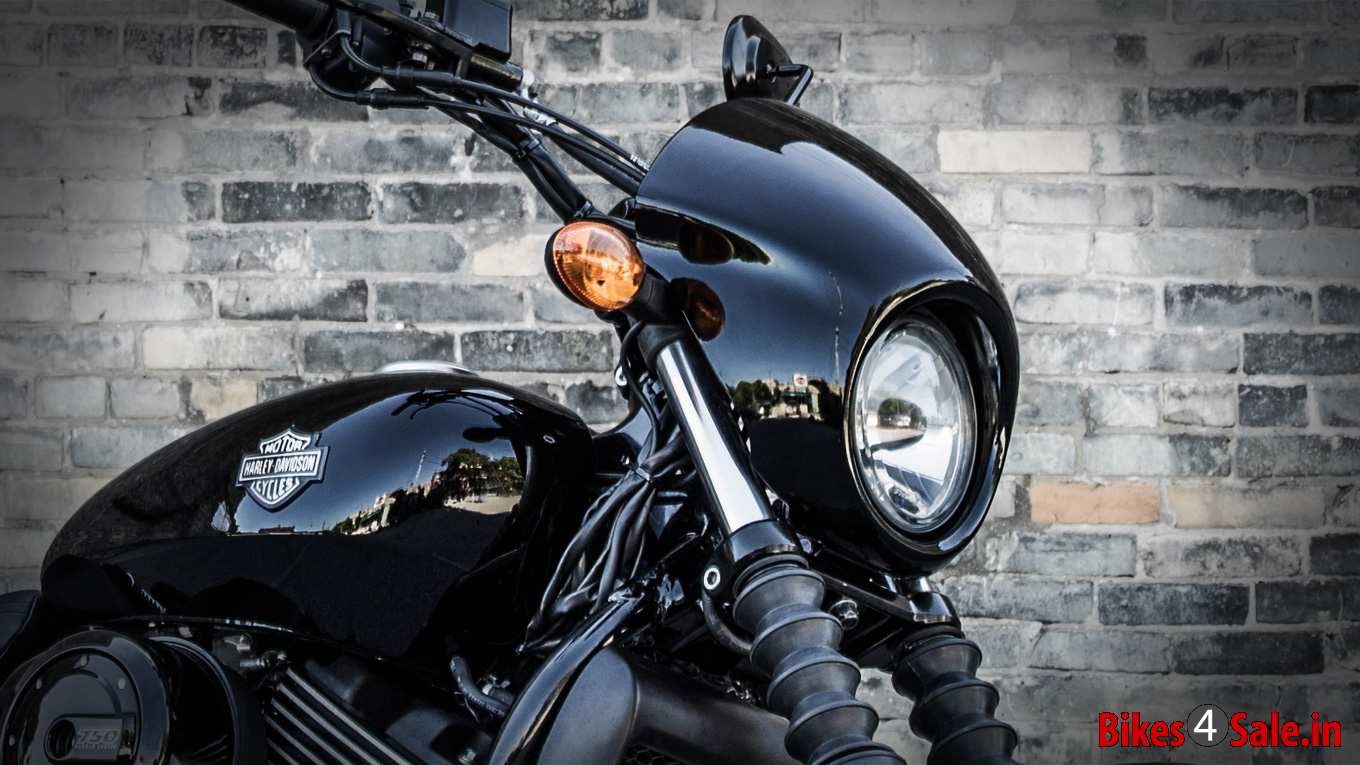 The paint scheme, seat structure, round headlamp and single pod instrument console has been inspired from other HD motorcycles available in the market. The low sit seats provides a comfort riding and relaxed foot on the ground. But it may seems bit difficult for the taller riders. 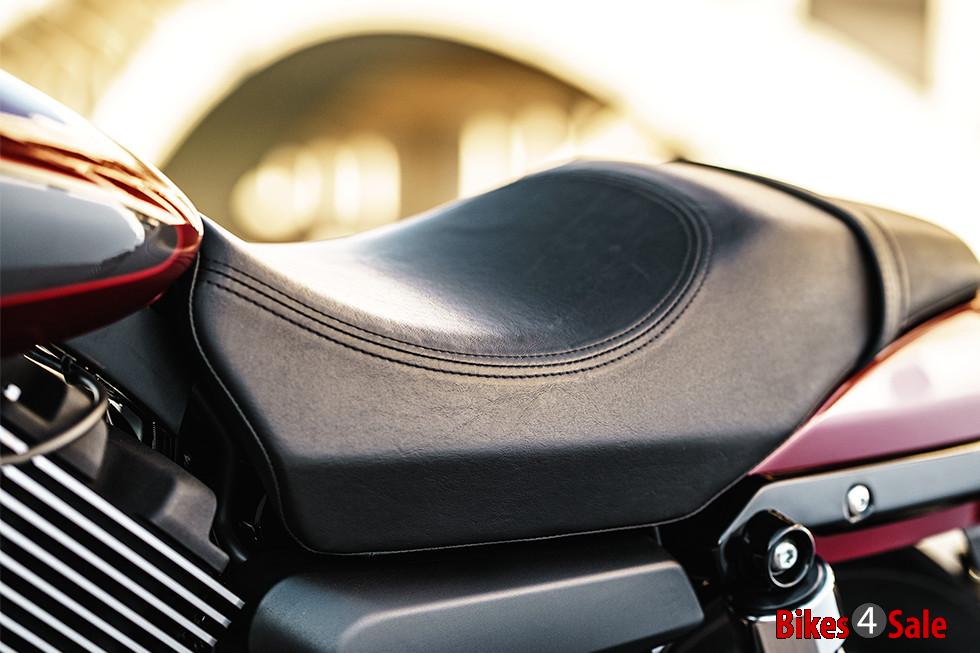 As it is the cheapest Harley in town, one can clearly spot out the evidence of this cost reduction. The wires, tubes and even some welds of this machine is easily visible. The fit and finish of this bike does not matches with the standards of Harley Davidson. Paint quality, gaps in the fairing, bad welding, exposed spines on the metals are some of the design drawbacks of this machine. Rear light is made of LED, which is fitted as a part of the tail section, beneath the pillion seat. 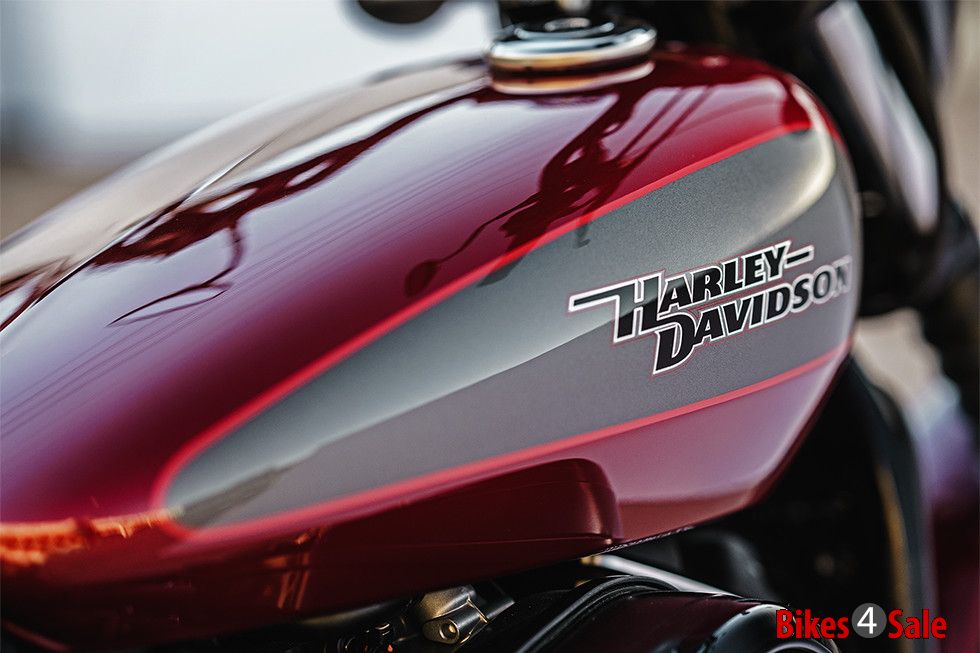 Inorder to reduce the pricetag, they had omitted many features in this particular model. The company offers only a limited standard accessories like windshield, tyres, alloys, exhaust kits, pillion seats with back rest and some chrome accessories. The instrument console shows analog speedometer, digital odometer and tripmeters. It also gets an array of warning lights like fuel reserve, low oil pressure and engine diagnostics indicators. 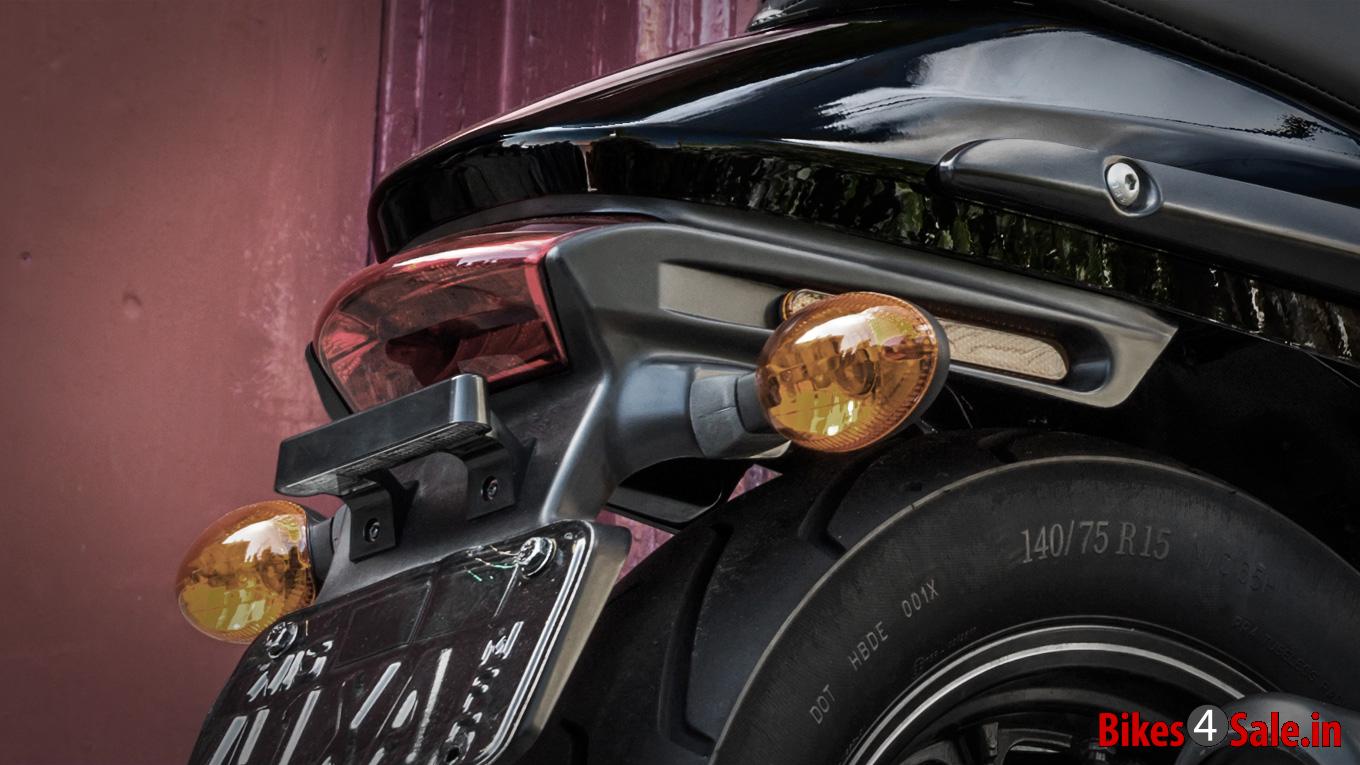 Suspension, Braking and Chassis
The suspension of Street 750 consists of telescopic forks at the front and gas charged shocks with rectangular swingarm at the rear. A 292mm single disc brake at the front and 260mm single disc brake at the rear deals with the stopping force of this motorcycle. Street can cruise to a top speed of 120 to 130kmph and these disc brakes are not so efficient with the weight to power ratio. ABS feature absent in this model. The bike is built around steel double cradle frame which is very well designed to meet the commuting standards and feels stable in cornering. Also it has a decent ground clearance of 145mm. 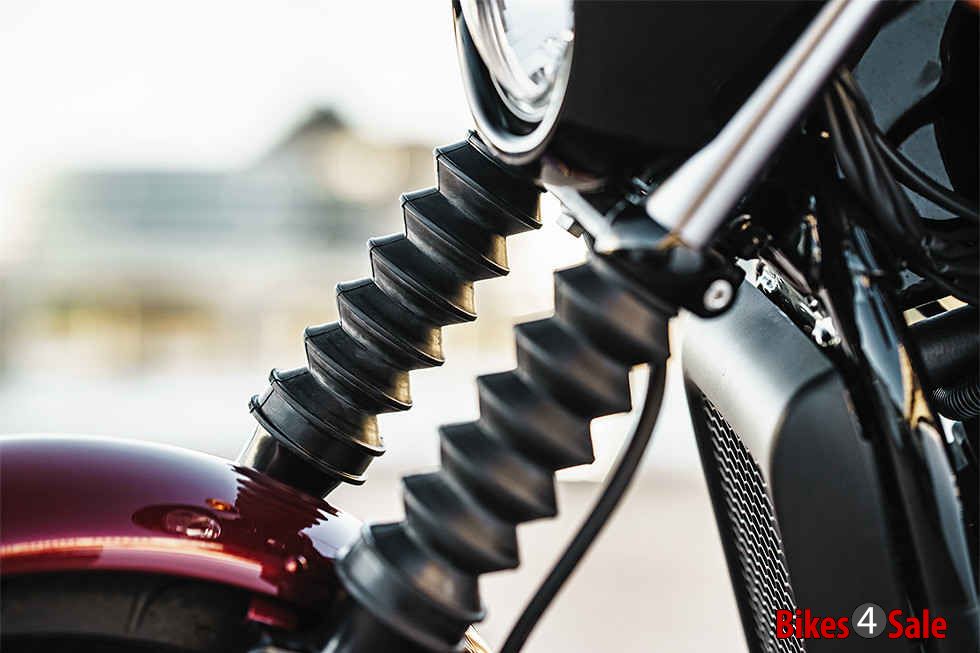 Verdict
One of the main advantage of owning a Harley is that you automatically becomes the part of legendary Harley Davidson Owners Group (HOG). For many, becoming a part of HOG is everything. This American motorcycle brand has evolved from the chopper and cruiser culture of the Yankees. Street 750 bears the soul of a true Harley rather in an unfit costume. The fit and finish of this model is disgrace to the HD family. But considering the price tag with which they are selling, these minor facts can be neglected. It cannot be called as a riders bike, as it lacks the true motoring experience. Still, the road presence of Street 750 is really good and it could be a good companion for smooth cruising on the highways and city roads as well.
Test drive reports, reviews and news
User Reviews of Street 750. Write Your Review
I love this H.D-street-750
By P.c.tiwari on 22-07-2014