After the launch of 150cc bike Hero Impulse, it was launch of 110cc scooter Hero Maestro post split and under brand new Hero identity. Hero has unveiled the Maestro scooter in London but it hasn't been launched officially.

Hero seems to be strategically betting on attractive and growing segment of unisex scooters and there is no better way than to launch one and pit it against competitor Honda (Activa). From the way it looks the Hero Maestro at least has potential to cause some shake in the stable of the country's largest player, Honda.

The previous model from Hero Honda, Pleasure was an average hit among youth and Hero wants to rewrite it with the new Maestro and it is targeted at men and women rather focus on one sex unlike the Pleasure.

Maestro has larger dimensions as compared to its predecessor Pleasure and has more storage as compared to Activa and the instrumentation features an LCD console. That said it resembles Activa in many ways. It will run on a 110cc new generation V-Matic four-stroke engine with AMI (Advanced Microprocessor Ignition) technology. The metal body, tuff-up tube tyres, combi-brakes add to the safety of the scooter. The let down though, Maestro won't have telescopic forks and disc brake (front). Maestro comes in six colors: Panther Black Met, Force Silver Met, Pearl Fadeless White, Pearl Harvest Green, Maestro Blue Met and Candy Blazing Red. 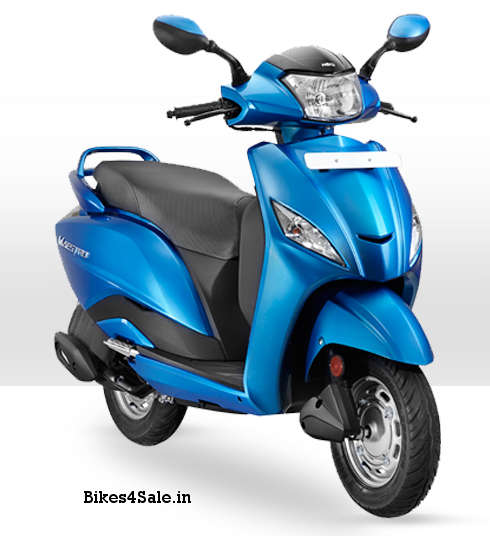 Hero Maestro if priced well and if waiting period is not much unlike Activa and Access can beat the hell out of competition.
Written by Harikumar Varma.
Last updated on 12-12-2016. Published on 02-11-2011.

Published by Bikes4Sale in category News
Latest Comments. Share Your Opinion
All I read in comparison of Honda & Hero is looks and price. Can any expert tell me if we can rely on Hero's technology ??? Is Maestro good enough to take on Honda's technology in Activa !!?? Am planning to buy any1 of these in coming days.
By Azhar on 13-04-2012
what is the average of maestro
By Hrishikesh on 29-03-2012
Hero coming in Rajsthan state
By Vasim on 07-12-2011
Add Your Comment
Low Interest Bike Loan