Honda CB Dazzler - all set for a launch

HSMI (Honda Scooters and Motorcycles India) seems to be adding to the heat element across the country this summer. If you are wondering what, rumors are rife that the country's number one bike company is gearing to re-launch its Unicorn after giving some engine tweaks and also a cosmetic makeover.

The new commuter bike is expected to be called the Honda CB Dazzler. The concept bike was exhibited at Auto Expo 2010. Although all the details of the new Honda CB Dazzler are not clear at this point, the price range of the bike will be in the range of Rs. 60,000 to 70,000 and will probably kiss the roads of India somewhere during May 2010.

Unicorn has brought in many followers to Honda and the flagship motorcycle always been Honda's trump card for many years. It is not exaggeration to say that people who rode the bike will seldom have any complaints about the bike. With that being said the company wants to cash in more from its trump card and is making it sportier and no it will not just be one sticker kinda job - bike enthusiasts might appreciate the changes it will receive, so it can be deservedly the Honda CB Dazzler - than the Unicorn.

When it comes to the engine the CB Dazzler will run on the same 149.1cc engine which is 4-stroke air-cooled one producing 13.3 bhp horse power at 8000 rpm and generates a 13 Nm torque at 5500 rpm. Unicorn engine never had nasty complaints and is touted as maintenance-free kind and also fairly decent one from the stable of HSMI. 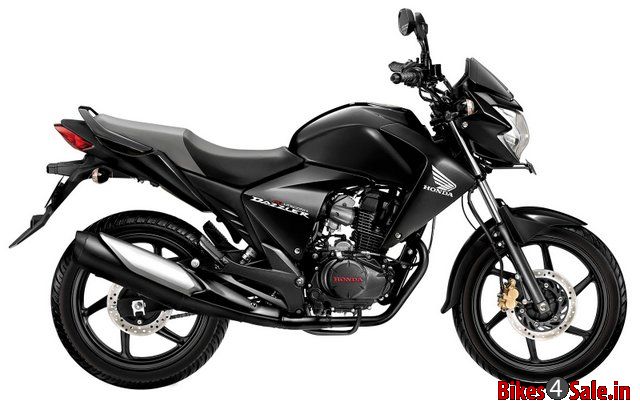 The CB Dazzler is expected to come with tubeless tires, sport disc brakes (obviously), a redesigned front cowl with dazzling tail lamp (is it from this that the CB Dazzler gotten its name?) will complete the Dazzler package.

Besides, the bike will sport dual tone color styling and panels under the fuel tank and the split grab rails at the rear will be adding flair. The digital speedometer, trip meter and fuel gauge meter will be like the topping on the Dazzler cake.

If you ask to summarize the styling part of the Honda CB Dazzler, then it is new front cowl with dazzling rear tail lamp, tweaked and more attractive tank shrouds, double tone, split grab rails on the rear, digital speedometer, fuel gauge, trip meter and analogue tachometer is what the Dazzler will be wooing us.

Keep waiting for the wonderful package to roll on the Indian roads and we can discuss about its performance as compared to Pulsars or Apaches.

Published by Bikes4Sale in category News
Latest Comments. Share Your Opinion
So nice one.....
By Shihaz on 27-06-2011
bhavani you dog
By Danish on 07-08-2010
hi
dazzler is mindblowing nice to see honda re introducing the unicorn.
By Bhavani on 13-05-2010
Add Your Comment
Low Interest Bike Loan